Cherrapunji – The Rainy Valley Of India 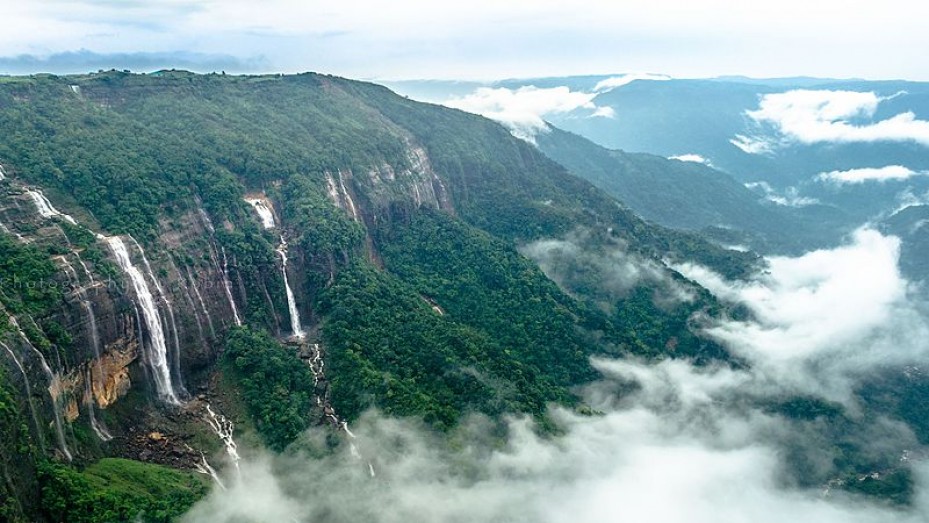 Cherrapunji or Sohra as it is known by the locals is one of the main reasons Meghalaya is known all over the world. Once the wettest land on Earth, Cherrapunji is mesmerising. The undulating hills, the many waterfalls, the panoramic view of the Bangladesh plains and a glimpse to local tribal lifestyle make a visit to Cherrapunji memorable.

The Wet Lands Of Cherra – Tourist Places In And Around Cherrapunji

While Cherrapunji (which can be translated in the land of oranges) receives heavy rainfall throughout the year, its terrains are sparse and agriculture almost impossible. The reason is that the continuous rain and years of deforestation has weakened the top soil washing it away with subsequent rainfall.

But thanks to the continuous rainfall, there are several enchanting tourist spots in the area. The waterfalls like Mawsmai Falls, Nohkalikai Falls, Dain-Thlen Falls jet down the hills into narrow pits creating an image that is unforgettable. Special mention must be made of beautiful Nohkalikai Falls which is one of the tallest falls in the country. To boast Cherrapunji tourism, the Sa-I-Mika Park and Resorts has loads of fun activities to enjoy.

A drive from Shillong on winding roads, by narrow yet deep gorges, traversing through the fog and literally feeling the clouds on one’s face leads one to the beautiful Cherrapunji. Nature has abundantly blessed Sohra making it one pristine tourist attraction. Cherrapunji tourism is not just about normal sight-seeing but a lot about adventure tourism too. From the regular tourist spots to out of the way destinations, Cherrapunji has it all.

Cherrapunji is a sub-divisional town in the East Khasi Hills district of Meghalaya. Situated at an altitude of 1484 meters above sea level, Sohra is nestled on a plateau which overlooks the seemingly unending plains of Bangladesh. According to most reliable data, Cherrapunji receives an annual rainfall of 463.66 inches per year and is one of the wettest lands on the planet.

The arrival of the British to the quite Khasi Hills changed the way the area functions today. David Scott, the political agent of the East India Company arrived at Cherrapunji in the early 19th Century via Syhlet district of erstwhile East Bengal. Under Scott, Cherrapunji came to be known as the ‘Cherra Station’ and he made it the official headquarters of the Khasi and Jaintia Hills.

Subsequently, it also served as the capital of Assam before the British moved the capital to Shillong. Sohra saw an immense change after the Welsh Mission arrived here. Cherrapunji was evangelised by the Welsh Mission under the relentless championship of William Carey. Thomas Jones, another missionary, made equal contribution in the Khasi and Jaintia Hills helping the tribal population in advancing agricultural practices et al. In fact, the first church in North East India was built in Cherrapunji in the year 1820.

While the missionaries continued their relentless work in advancing the tribal community, the British soon recognised the geographical advantage of Cherra. Its proximity to the Syhlet plains on one hand and to the Assam hills on the other made it an ideal administrative centre. The pleasant weather only made things better.

How To Reach Cherrapunji

Cherrapunji receives an average annual rainfall of 11931.7 mm every year. Tourists will encounter perennial rainfall while in Sohra with heavy downpours every now and then. During the summers when it doesn’t rain that much, it becomes humid and quite hot.

Cherrapunji is Famous for

How to Reach Cherrapunji