Kanyakumari - The Shore Of Magnificent Dawns And Dusks 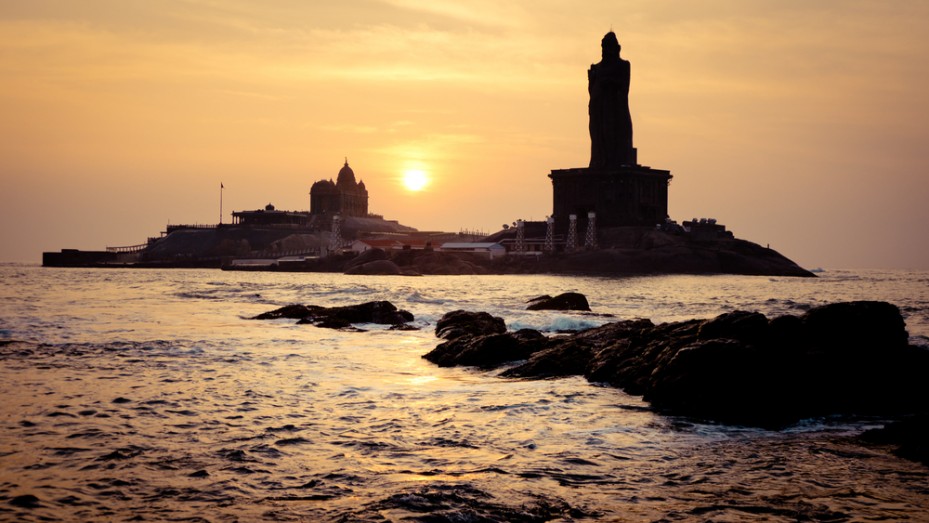 Kanyakumari, which was famous as “Cape Comorin” in the past, is situated in Tamil Nadu, India. The town is located at the southernmost tip of the Indian mainland. Kanyakumari rests at the position where the Indian Ocean, the Bay of Bengal and the Arabian Sea join.

The state of Kerala is situated towards its northwest and west, whereas, the Tirunelveli district is located towards its north and east. The capital of Kerala, that is Thiruvanathapuram, is located at almost 85 kilometers from Kanyakumari. The town is also well-known for its eye-catching and magnificent dawns and dusks, particularly on the full moon days.

Temples And Beaches - Tourist Places In And Around Kanyakumari

People who have a creative bend of mind may, especially, find interest in the art and culture of the town. However, Kanyakumari has numerous temples and beaches that can attract a lot of pilgrims, as well as, the funloving travelers. The main attractions of the city include - Vivekananda Rock Memorial, Vattakottai Fort, Padmanabhapuram Palace, Thiruvalluvar Statue, Vavathurai, Udayagiri Fort and Gandhi museum.

Beaches in Kanyakumari are the main attractions for the fun loving people who come to enjoy the place with their family and friends. Some of the famous beaches near the town are- Sanguthurai Beach, Thengapattinam Beach, and the Sothavilai Beach.

Not only has it been one of the main centers of religion and art, but Kanyakumari has also been famous for commerce and trade for the past few centuries. The town was under the authority of a number of dynasties comprising Pandyas, Cholas, Nayaks and Cheras. One can get the proof of the art and civilization of these reigns by looking at the architecture of the Kanyakumari Temples.

Soon after, the town came under the leadership of Venad dynasty. At that juncture, the capital of the town was situated at Padmanabhapuram. Since 1729 to 1758, Anizham Thirunal Marthanda Varma (the emperor of Venad), founded Travancore and the region which presently comes under the district Kanyakumari, was famous as South Travancore.

After the reign of Paravar kings, the town was governed by the emperors of Travancore, under the absolute power of British, until India became independent in 1947. In 1947, Travancore was considered as a portion of the self-governing Indian Union and the reign of Travancore kings concluded.

Kanyakumari has been famous for its art, culture, economy and history for thousands of years. One can find a mixture of religions like Christianity, Islam and Hinduism in the city and hence the place is famous for its mixed culture. For the past few centuries, Kanyakumari has been able to attract thousands of pilgrims by its rich cultural heritage. The beautiful churches, temples, statues and religious places catch the attention of the travelers. The mixed culture of the town is reflected in its constructions, arts and in the cuisines as well. The traditional dance of Kanyakumari is famous as Kathakali. Some of the main festivals which are celebrated in the town are Catholic Church’s Holy annual festival, Navratri and Chaitra purnima.

Kanyakumari is not a place for shopaholics; however, there are several shopping destinations where one can buy some mementos for their loved ones. One can purchase numerous seashell items like lovely seashell trinkets and small mementos. One can also go for handicraft stuff made by the residents. These beautiful products are made of cane, bamboo, and wood and one can buy it either to decorate their house or to gift their friends or relatives.

Little junk jewelry made of various types of seashells and multi-colored sea sands are also nice things to include on the shopping list. Some of the renowned shops in the city are - Indco products, Tamil Nadu Co-optex sales emporium and Tamil Nadu crafts and Poompuhar, where one can buy a variety of textiles and handicraft stuff. The items sold on the roads are reasonably priced.

Seafood is quite famous among the locals of Kanyakumari. The food is very spicy, and coconut is the main ingredient in almost every cuisine. The majority of restaurants in the town offer a range of South Indian dishes including vada, idli, dosa and uttapam. There are also a few restaurants in Kanyakumari that offer Chinese, Rajasthani and Gujrati food as well.

How To Reach Kanyakumari

The nearest airport to the city is Thiruvananthapuram. Tourists can get down at the airport and take a taxi, train or a bus to reach Kanyakumari. Within Kanyakumari, one can take auto rickshaws or buses to travel around. One can also hire a private taxi.

The perfect time to pay a visit to the city is from October to February, and one can get a pleasant weather during this period. One should avoid visiting the place from June to August because of rainy season.

Kanyakumari is Famous for

How to Reach Kanyakumari