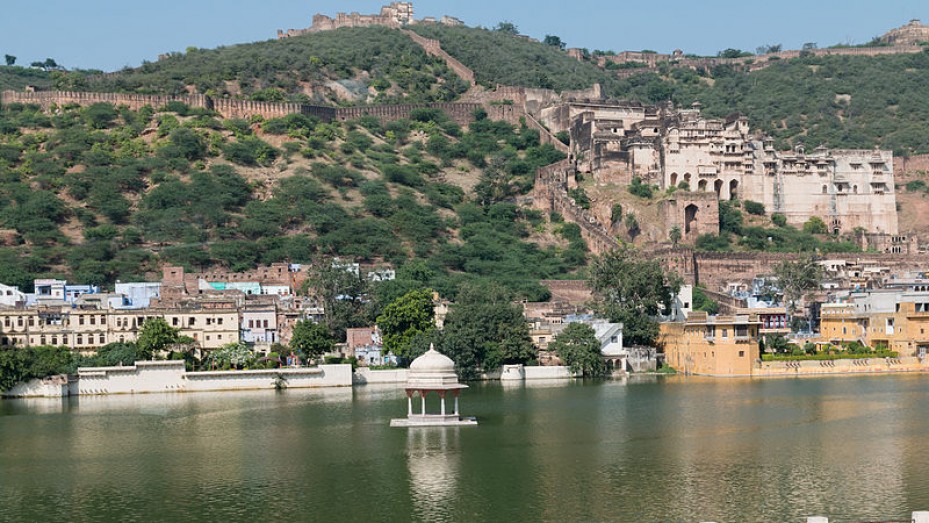 Bundi is a district located in the Hadoti region of Rajasthan at a distance of 36 km from Kota. Ornate forts, splendid palaces and Rajput architecture, beautifully carved in brackets and pillars, make it a beautiful place worth visiting.

Sparkling rivers, lakes and breathtaking waterfalls enhance the beauty of the region. A large part of Bundi is covered with sylvan and is home to rare varieties of flora and fauna. Bundi has been a source of inspiration to a number of great painters, authors and artists. Rudyard Kipling, too, found inspiration for his creation “Kim” from here.

The district is spread over an area of 5550 sq km and has a population of about 88,000, as per the 2001 Census. Bundi is divided into five tehsils, six towns, four panchayat samitis and around 890 villages.

The district headquarters is located in the town of Bundi, which is home to some magnificent forts, palaces and Step Wells, popularly known as baoris.

Places Of Interest - Tourist Places In And Around Bundi

A Peep Into The History And Culture Of Bundi

Various local tribes inhabited the region in the ancient times. Of all these tribes, the most prominent ones were the Parihar Meenas. It is believed that Bundi derived its name from a former King, Bunda Meena.

Rao Deva Hada took over Bundi from Jaita Meena in 1342 and governed the region and renamed the surrounding area Hadavati or Hadoti. The Hada Rajputs ruled over the region for around 200 years. Their rule came to an end in 1533, when the Mughal Emperor Akbar took over it.

The residents of Bundi are mostly Rajputs and are known for their bravery and heroism. Most of the aborigines of Bundi are old fashioned and follow the typical Rajasthani culture and rituals. Hindi and Rajasthani are the two major languages spoken here.

Music and painting have always remained an integral part of the Bundi culture; consequently, the region is inhabited by several vocalists and musicians. The Bundi School of painting has been influenced by the style of Mughal and Ragmala paintings.

Kali Teej is the prominent festival of Bundi and is celebrated with pomp and gaiety. It is a two-day festival with the celebrations beginning from the third day of the Hindu month of Bhadra (July to August).

Connectivity To Other Cities – How To Reach Bundi

The Bundi railway station, located at a distance of 2 km south of the old city, is the nearest rail-head. Trains from various cities of India like Jaipur, Agra, Varanasi, Dehradun, etc., pass through the station.

Bundi is well connected to various spots in Rajasthan through the Express bus service. Buses are available to destinations like Madhopur, Bikaner, Jaipur and Kota. Various buses also run from Bijolia, Udaipur, Ajmer and Jodhpur to Bundi.

The best time to travel to Bundi is during the months of October to March.

Bundi is Famous for

How to Reach Bundi