Rishikesh - The Gateway To The Himalayas 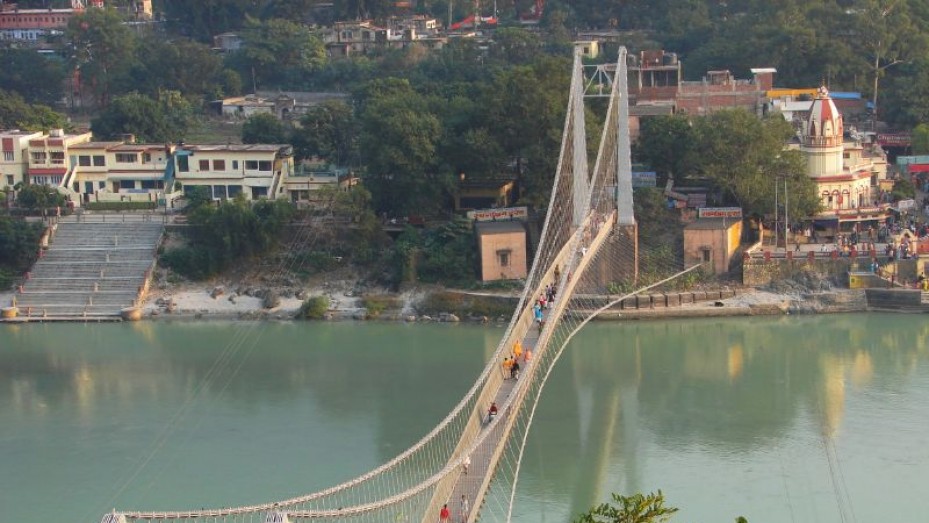 Rishikesh, also known as Devbhoomi, is a noted pilgrimage centre in the district of Dehradun. Located on the banks of the holy river Ganga, this place holds great religious importance among the Hindu community. Every year, large numbers of tourists from all over the country visit this place to explore religious sites, view the mighty Himalayas and take a dip in the river Ganga. Situated at the foothills of the Himalayas, Rishikesh is the abode of several Hindu deities.

The place is far-famed for its ancient temples and ashrams. Numerous yoga and meditation centres are also present in the region, where regular yoga and meditation sessions are conducted by experienced gurus. According to the Hindu mythology, Lord Rama meditated here after killing Ravana, the antagonist from the Hindu epic–the Ramayana. It is the same place from where Lord Rama’s younger brother Lakshman crossed the river Ganga with the help of a jute bridge. The bridge is, therefore, called the Lakshman Jhoola. It was built in 1889 using twigs and later, in 1924, it was reconstructed as a suspension iron bridge.

Tourist Places In And Around Rishikesh

The Kunjapuri Temple is devoted to the Hindu goddess Sati who is considered as one of the thirteen most important deities of the Shivalik Range. Legend has it that the upper part of the goddess Sati fell here when the Hindu Lord Shiva, her husband, was taking her body to the Kailash Mountain. The temple is built on the spot where her torso fell whilst Lord Shiva carrying her dead body. Travellers can also visit the Neelkanth Mahadev Temple, which is located on the point where the rivers Pankaja and Madhumati meet. The hills of Vishnu Koot, Mani Koot and Brahma Koot surround the temple from four sides. Devotees in large numbers visit this temple during the popular Hindu festival, Shivaratri.

Visitors must not forget to visit Rishikund, which is situated in the vicinity of the Triveni Ghat. It is a small pond, which was filled with water by the goddess of the Yamuna river as a reward to Saint Kubz. Travellers can see the reflection of the old Raghunath Temple in the pond. Vashishta Gufa is another prominent attraction in Rishikesh, which along with a meditation centre, forms a popular camp site for the adventure lovers. The Ashram of Sri Swami Purushottamananda Ji, which is a noted spot for meditation, is situated in proximity to the gufa.

Apart from this, Kali Kamli Wala Panchayati Kshetra, founded by Shri Baba Vishuddha Nandaji, is also a renowned attraction of the region. Its head office is in Rishikesh; whereas, its branches are spread all over Garhwal. For the convenience of travellers, the ashram provides lodging facilities. Another ashram in Rishikesh is the Sivananda Ashram that was founded by Swami Sivananda. The ashram is situated on the banks of the river Ganga at the foothills of the Himalayas. Travellers can also visit the Omkarananda Ashram, which was established in 1967. The ashram works towards the betterment of the society and culture and promotes education in the region. Under the leadership of Swami Omkarananda, the ashram is managed by a group of Hindu sages.

If time permits, travellers can also visit the Shivpuri Temple that is located at a distance of 16 km from Rishikesh. Dedicated to the Hindu lord Shiva, this temple is located on the banks of the holy river Ganga. The place is also a major spot where travellers can enjoy river rafting. The Neelkanth Mahadev Temple, Gita Bhawan, Triveni Ghat and Swarga Ashram are some of the other well-known places in Rishikesh.

Apart from pilgrims, the destination attracts adventure enthusiasts. As the city is situated amid mountains, it is well suited to enjoy trekking. Some of the popular Trekking routes of the region include Garhwal Himalayan Range, Buwani Neergud, Roopkund, Kuari Pass, Kalindi Khal Trek, Kankul Khal Trek and Devi National Park. The period between February and October is considered best for trekking in the region.

Besides, the place acts as a base for another popular adventurous sport called river rafting. Travellers can enjoy this water sport by availing guidance from professionals. River crossing is also an interesting adventure sport that travellers can enjoy during their sojourn to Rishikesh. In this sport, people are supposed to cross the river while walking on a rope.

How To Reach Rishikesh

To reach Rishikesh by air, travellers can take flights from Jolly Grant Airport of Dehradun, located at a distance of 18 km. Rishikesh has its own railway station which is connected to important Indian cities including Delhi, Mumbai, Kotdwar and Dehradun. Further, to reach the destination by road, travellers can opt for private- or state-owned buses from places like Delhi, Dehradun and Haridwar.

Weather remains pleasant in Rishikesh for most of the year. However, tourists are advised not to visit this place in the month of May as the temperature gets quite high during this time.

Rishikesh is Famous for

How to Reach Rishikesh