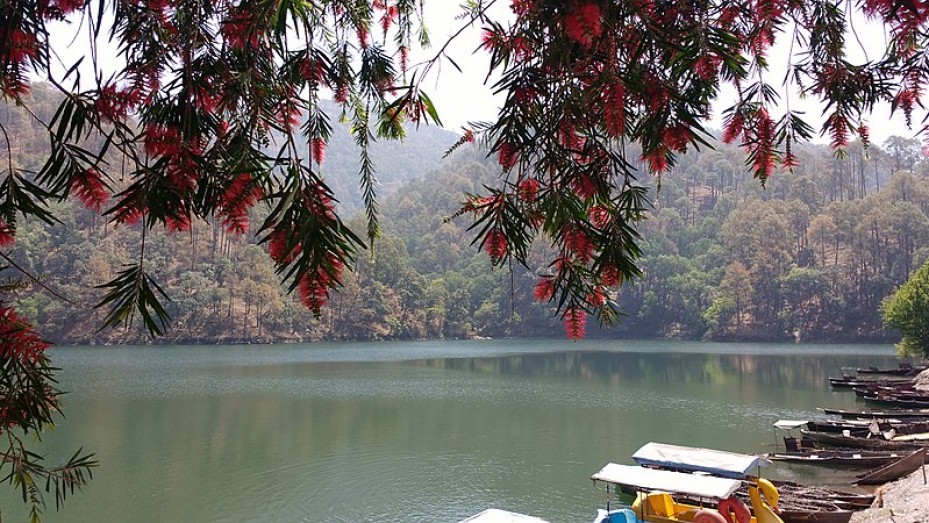 Bhimtal is a town situated at an altitude of 1370 m above sea level, in the Nainital District of Uttarakhand. According to historical records, the town was ruled by the British people after the Anglo-Nepalese War that occurred between the years 1814 and 1816. Older than its neighbouring city Nanital, Bhimtal still uses the old pedestrian road that connects Kathgodam, Kumaon Hills, Nepal and Tibet.

It is also said that Bhimtal was once a part of the famous ancient silk route. Now a mini headquarter of the district of Nainital, this ancient town is named after the legendary Bhima, who was one of the Pandavas (the five brothers as well as the famous mythological characters of the Hindu epic Mahabharata).

The Bhimeshwara Temple is believed to be built in this area when Bhima came here during the banishment of Pandavas.

Tourist Places In And Around Bhimtal

There is a shrine known as Kartotaka Nag Temple which is devoted to the serpent god Nag Karkotaka Maharaja, a mythical cobra. Many devotees visit this temple on the auspicious occasion of Rishi Panchami. The Museum of Folk Culture exhibits images of rock arts, folk paintings, archaeological items, and ancient manuscripts.

Tourists can also see various images of the gods and goddesses in the museum. Tourists can also visit Sattal, which is famous for a group of seven interconnected beautiful lakes, located at a distance of 3 km from Bhimtal. Sattal is a natural habitat of 500 resident & migratory birds, 11,000 insects and 525 species of butterfly.

Birds like kingfishers, brown-headed barbets, blue whistling-thrush, Indian tree pies and red-billed blue magpies are commonly seen here. Various species of mammals and butterflies are found in the region. There is a hill known as Hidimba Parvat located near this lake. According to belief, the name of the hill is derived from the demon Hidimba, a mythological character of the great epic ‘Mahabharata’.

Presently, a monk as well as an environmentalist, Vankhandi Maharaj resides in the hill. He has created a wildlife sanctuary around the hill. Now the area is famous as Vankhandi Ashram.

How To Reach Bhimtal

Travellers can reach Bhimtal by air, rail and bus. The nearest airbase to the place is the Pantnagar Airport which is well connected to the Indira Gandhi International Airport of New Delhi by regular flights. Trains are also available from Kathgodam Railway Station. This railhead is situated at a distance of 21 km from Bhimtal.

The most convenient way to reach the destination is by bus. Famous tourist hotspots like Nainital, Dehradun, Haridwar and Rishikesh offer bus services to Bhimtal. Tourists can also avail buses from Mussoorie, Rudraprayag, Kausani, Ranikhet and Uttarkashi. The city of Delhi is also connected to Bhimtal by luxurious tourist buses.

The region enjoys a sub tropical climate throughout the year. The seasons of the place are summer, monsoon and winter. The maximum and minimum temperature during the summer season is around 27° C and 10° C, respectively. During monsoons, Bhimtal experiences heavy rainfall.

Freezing winters start here in the month of November and remain till February. The minimum temperature has been recorded at -3° C. Therefore, tourists planning a trip to Bhimtal are advised to visit the place ideally during summer.

Bhimtal is Famous for

How to Reach Bhimtal