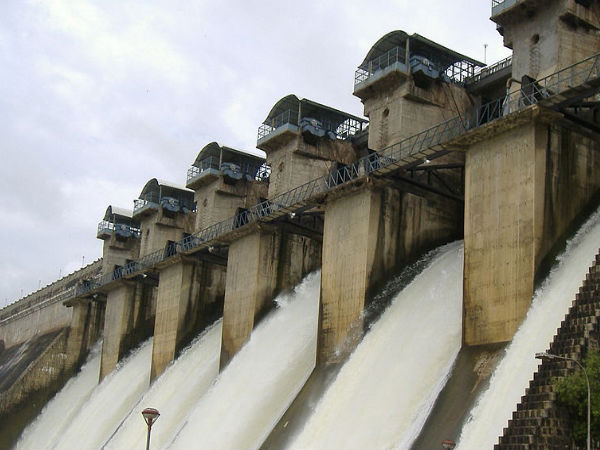 Hill stations, beaches, temples, etc. are the usual choices for tourism. The reservoirs and backwaters are also interesting to visit. These famous dams offer an offbeat travel option for tourists in Karnataka.

While you visit a popular place, tag along the dam sites for a unique travel in Karnataka. Big gates, water gushing with tremendous force and the amazing backwaters provide a scenic view.

Some reservoirs have facilities like coracle ride, boating, wildlife travel and so on. These places also become an integral part of karnataka tourism.

Let us go around some picturesque dams in Karnataka!

KRS built across the Kaveri River in Mysore is one of the famous dams in Karnataka. It was constructed by Sir M.Visveswaraya in1924.

KRS is named after the King of Mysore, Krishnaraja Wodeyar IV who was the ruler at that time.

This reservoir is the main source of drinking water to Mysore ,Bangalore and later which flows to Tamil Nadu.

Brindavan Gardens along with KRS is a popular tourist attraction in Mysore.

Tungabhadra Dam is considered as the biggest dam in Karnataka. This multi-purpose dam is built across Tungabhadra River in Hospet.

The dam which has 33 gates provides water for irrigation, drinking water and is also used for electricity generation.

Hampi which is around 25km from the dam is a famous tourist place near to it.

Vani Vilasa Sagara is the oldest dam in Karnataka. It is situated in Chitradurga and built across the River Vedavathi during pre-independence age.

The dam is fondly known as 'Mari Kanive' and it is slowly gaining popularity as a tourist attraction.

Panchavati, a garden of medicinal plants, is also situated near to the dam and is being developed to improve eco-tourism.

Supa Dam in North Karnataka is constructed across Kali River. The dam is used for the generation of electricity.

It is now handled by Karnataka Power Corporation Limited.

Almatti Dam was built as a part of hydroelectric project and Upper Krishna Irrigation Project.

It is built across Krishna River in North Karnataka, the terrace gardens around the dam has been created to increase tourism.

Even boating, musical fountains, etc are there to entertain tourists.

Almatti Dam is around 71km from Vijaypur (Bijapur).

Hemavati Dam in Hassan was constructed in 1979 and is built over Hemavati River, a tributary of River Kaveri.

When it was constructed, the water levels submerged an ancient church called Shettihali Rosary Church. Today a part of it is visible only when the water is low.

The backwaters of Kabini Dam is rich in wildlife, Nagarhole National Park becomes part of the Kabini Forest Reserve.

Kabini, originates in Wayanad and Banasura Sagar Dam is constructed across it. The river flows towards Karnataka to join Kaveri.

Kabini wildlife and reservoir is a famous tourist place in Karnataka.