Karnataka – A Land Of Heritage 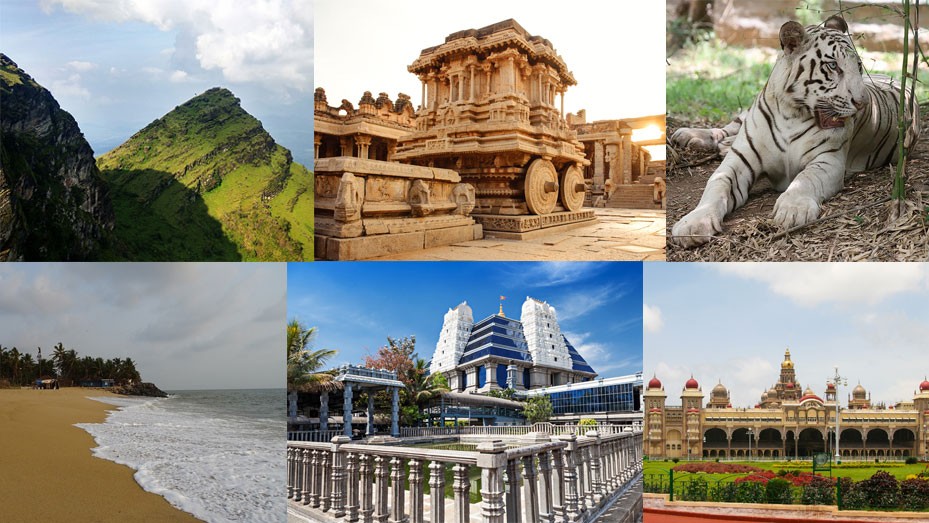 Karnataka, in the south-west of India, is a prominent tourism hub, attracting tourists from across the world. Karnataka tourism has seen a boost owing to its capital, Bangalore, which is emerging as the IT centre of the country. The flourish in tourism has triggered the mushrooming of resorts and homestays across the state, facilitating a better travel experience.

Karnataka is geographically divided into the coastal region or Karavali, the hilly region or Malenadu, which encompasses the Western Ghats and the plains or Bayaluseeme; Bayaluseeme is further classified into northern and southern regions.

Karnataka basically has four seasons in a year; summer, monsoon, post-monsoon and winter. Post-monsoon from October-December and winter from January to February are the most pleasant times to visit.

Kannada is the official language of the state. Tulu, Kodava and Konkani are other native languages spoken. The national language Hindi is also spoken by the natives. With a lot of migration from other states of the country, owing to the development in the IT sector, the state now has immigrants speaking Malayalam, Tamil, Telugu, etc. Not to mention that invariably English is widely spoken in the state.

Karnataka tourism has a lot to offer in the 30 districts of the state. The state throws a wide range of locations and spots for those struck by wanderlust, whether an adventurer, an explorer or someone who is simply smitten by unravelling scenic surprises.

The undulating wonders, valleys of green pastures in Coorg, has earned for it the name, The Scotland of India. This hill station is an important part of Karnataka tourism. Chikmagalur, the coffee land of Karnataka, Kemmanagundi, with its cascading waterfalls and lush greenery amd Kudremukh, also in Chikmagalur district, with its picturesque views, are some of the major hill stations.

Maravanthe is an example of a quiet coastal charm followed by more beaches, like Byndoor, Malpe, Karwar, to name a few.

Places of historical interest are innumerable in the state and are an important and inviting aspect of Karnataka tourism. Places in Karnataka, like Mysore, Badami, Hampi, Belur, Halebid, Shravanabelagola, etc., boast sculptural marvels which speak a thousand tales of the bygone era.

For those with the spirit of adventure, there are a lot of places in Karnataka scattered with a wide range of adventure activities. Cauvery fishing camps—Bheemeshwari, Galibore & Doddamakali—offer a joyous fishing experience. Savandurga, Anthargange, Shivgiri, Ramanagaram, etc. are frequented for Rock Climbing and trekking. Honnemardu, Shivgange, Shivanasamudra, Sangama, etc. entertain with boating, river rafting, Coracle Rides and other water activities.

Wildlife also attracts travellers to places in Karnataka like Bandipur—a famous tiger reserve—Kabini and Nagarhole are infested with elephants while BR Hills and Dandeli and Bhadra wildlife sanctuaries delight one with their wildlife and wilderness.

Bangalore is a truly metropolitan city with its diverse culture, IT companies, malls, etc., while the others, like Mysore and Mangalore, are catching up with it.

Below are the places in Karnataka categorised according to different holiday needs.