Khajuraho - Of Love Depicted On Stone 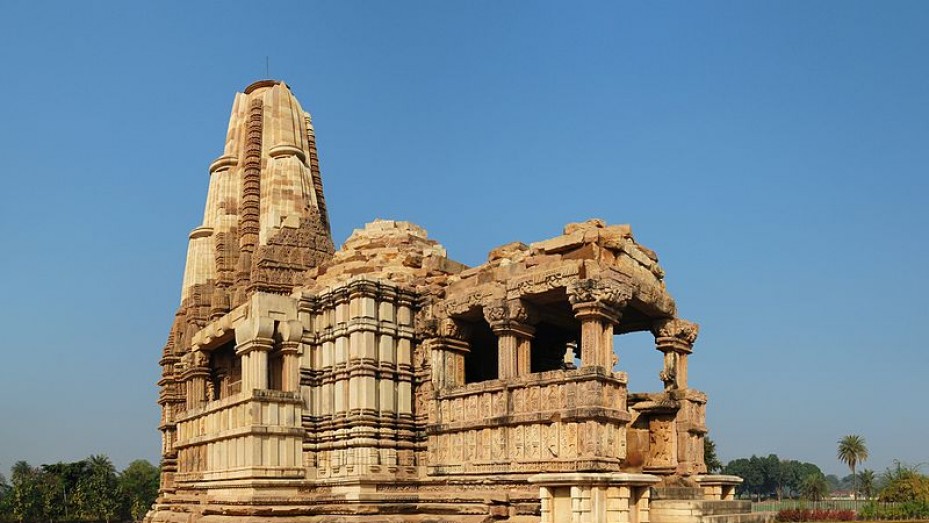 Khajuraho, seated in the Bundelkhand zone of Madhya Pradesh, is a picturesque hamlet set against the backdrop of the captivating Vindhya mountain ranges. Khajuraho has its name inscribed on the world heritage map as the village where the exceptional Khajuraho temples are situated. Khajuraho tourism is peppered with temples, crafted from sandstone, and famous for their unique and explicit rock carvings, portraying passion on stone.

Tourist Places In And Around Khajuraho

Khajuraho tourism boasts of sculptured temples where the theme is the presentation and glorification of love in all forms. Some remarkable temples in Khajuraho are the Chausath Yogini Temple, Javari Temple, Devi Jagdamba Temple, Viswanath Temple, Kandariya Mahadev Temple, Lakshmana Temple and many more.

Another major attraction is the Khajuraho Dance Festival. This festival is organised every year from 25th February to 2nd March. The week-long festival attracts artists and performers from all over India.

Khajuraho - The Bearer Of Heritage . . .

The temples of Khajuraho were constructed by the rulers of the Chandela dynasty that ruled Central India between 950-1050 AD. There were 85 temples at Khajuraho, of which just 22 have succeeded in surviving the devastation of time.

The unbelievable description of human passion on rock and the sensual sculptures have caught the imagination of the world. The temples were declared a World Heritage Site by UNESCO in 1986.

Khajuraho - A Celebration Of Life

Khajuraho - A Creative Variety Of Marvels On Stone

The temples of Khajuraho are categorised into three groups: western, eastern and southern groups. The western group consists of entirely Hindu temples. These temples depict some of the finest architectural splendours of Khajuraho. The largest temple in this group is the Kandariya Mahadeva Temple, which is also the largest and the most majestic temple in Khajuraho.

The eastern group consists of Hindu and Jain temples. These temples, though not as elaborately carved as the western temples, have a charm and splendour of their own. The Parsvanath Temple of this group is the largest Jain temple.

The southern group consists of just two temples, the Dhuladeo Temple and the Chaturbhuj Temple. These temples lack the touch of refined sculptures and architectural splendours of other Khajuraho temples.

How To Reach Khajuraho

Khajuraho is widely accessible through all means of transportation. The town has an airport, a railway station and bus stands. There are taxis, rickshaws and bicycles available for exploring the city.

Khajuraho is Famous for

How to Reach Khajuraho