Kedarnath – Of A Pious Temple And Bewitching Views 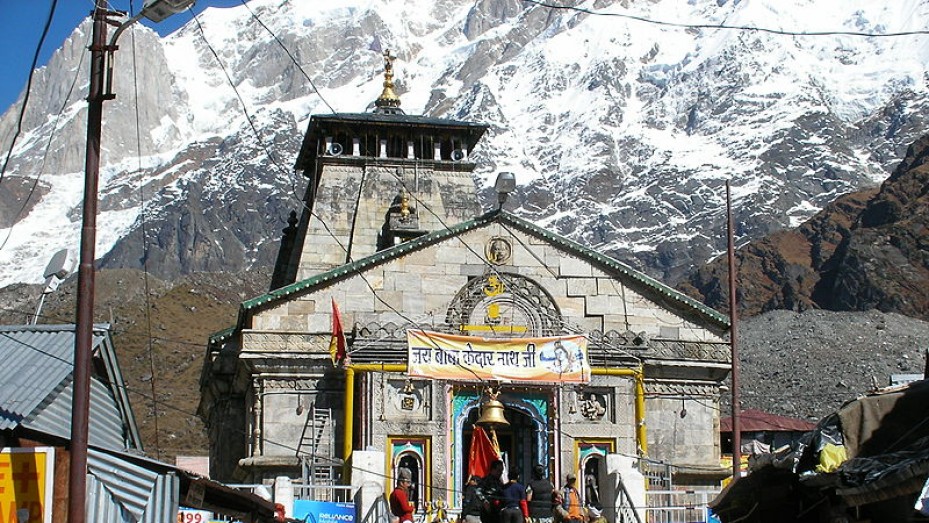 Kedarnath is situated in the Rudraprayag district of Uttarakhand. The place is nestled in the Garhwal Himalayas at an elevation of 3584 m above sea level. Kedarnath Temple, considered as one of the holiest destinations in Hinduism (Char Dhams), has the highest of all the 12 Jyotirlingas. The magnificent River Mandakini flows in proximity to the temple. During summers, this pilgrimage site is flocked by the tourists who come to seek the blessings of Lord Shiva.

The temple, which is about 1000 years old, was constructed using large stone slabs over a rectangular base. Devotees can find different inscriptions written in Pali language on the steps leading to the sanctums. The place, which is situated at an altitude of 3584 m above sea level, is the hardest to reach of all the char dhams. This temple is accessible only in summers for 6 months. The shrine remains closed in winters, as the region receives heavy snowfall during this time, which makes the climatic conditions adverse for habitation. During this time, the natives of the Kedarnath shift down to the lower altitudes and God Kedarnath’s palki is shifted to Ukhimath.

Tourist Places In And Around Kedarnath

Travellers visiting Kedarnath should also visit the Samadhi of Adi Guru Shankaracharya, which is situated in the vicinity of the Kedarnath Temple. Shankaracharya was a noted Hindu sage, who was acknowledged for spreading the awareness of Advaita Vedanta. He took Samadhi at an age of 32 years in this particular place, after he discovered the Char Dhams.

Sonprayag is located 19 km away from Kedarnath at an elevation of 1829 m. It is basically the confluence of River Basuki and Mandakini. This place is popular for its water, which is believed to have magical powers. According to legends, individuals who touch this water find a place in the Baikunth Dham. Vasuki Tal, situated at an altitude of 4135 m above sea level is another prominent spot situated at a distance of 8 km from Kedarnath. The lake is surrounded by the Himalayan ranges, which add to its scenic beauty. The magnificent Chaukhamba Peaks are also situated close to this lake. One has to cross over the glaciers of Chaturangi and Vasuki, for visiting Vasuki Tal, and that commands enormous endurance.

Kedarnath Wildlife Sanctuary, established in the year 1972, is located on the basin of River Alaknanda. The sanctuary sprawls across an area of 967 sq. km. The sanctuary is densely covered with pine, oak, birch, bugyals and alpine trees. Wide variety of flora and fauna is found in the region, owing to diverse physical and geographical characteristics of the place. Animals like bharals, cats, gorals, jackals, black bears, snow leopards, sambhars, tahrs, and serows, are frequently spotted. The sanctuary also protects the endangered species of Kedarnath Musk Deer. Bird watchers can spot different kinds of birds like flycatchers, monals and grey-cheeked warblers. Moreover, visitors can also find different kinds of fishes in the River Mandakini, some of which include Schizothorax sp., Nemacheilus, Gara sp., Barilius sp. and mahseer Tor tor.

Travellers visiting Kedarnath should also visit Guptkashi if time permits. There are 3 temples in the region, which include the ancient Vishwanath Temple, the Manikarnik Kund and the Ardhnareswar Temple. Devotees can find the idol of the lord in the form of half-and-half woman in the Ardhnareshwar Temple, devoted to Lord Shiva. The Vishwanath Temple also enshrines the idol of Lord Shiva in many of his incarnations. Another popular temple of Kedarnath is the Bhairav Nath Temple, which is situated at a distance of 0.5 km. The temple is dedicated to Lord Bhairav, who is supposedly the gana of Shiva. The idol of the deity was established in the temple by the first Rawal of Kedarnath named, Sh. Bhikund.

Gaurikund, situated at an altitude of 1982 m, is a noted tourist destination of Kedarnath. There is an ancient temple here, which is devoted to the Hindu deity Parvati. According to legends, Goddess Parvati meditated here to seek Lord Shiva as Her husband. There is a hot water spring in Gaurikund, the water of which not only has medicinal value but also helps in washing away the sins of the individuals.

How To Reach Kedarnath

The nearest airport to Kedarnath is the Jolly Grant Airport of Dehradun, which is just 239 km away. Travellers who wish to travel by train can book their tickets till Rishikesh railway station, which is situated at a distance of 227 km.

The period between the months of May and October is ideal for visiting Kedarnath, as the temperature remains pleasant during this time. The natives of the region vacate Kedarnath during winters owing to heavy snow.

Kedarnath is Famous for

How to Reach Kedarnath