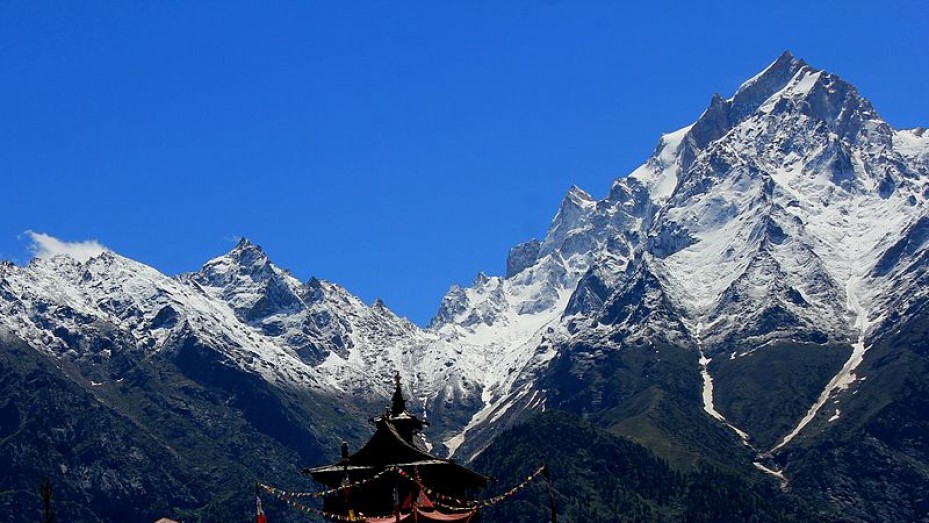 Kalpa is a small village situated in the Kinnaur District of Himachal Pradesh. Nestled at an elevation of 2758 m above sea level, Kalpa was earlier the headquarters of the Kinnaur region. However, it was later replaced by the city of Reckong Peo. Travellers can see the beautiful Sutlej river flowing down the Great Himalayas and passing through the rocky surface of Kinnaur.

According to records, the region of Kalpa was under the rule of Magadha Dynasty followed by the Mauryan Empire in the 6th century. Also, Kinnaur was ruled by the Guge Kingdom of Tibet in the 9th and 12th centuries. Later, King Akbar subjugated the region and incorporated it under the Mughal Empire.

Tourist Places In And Around Kalpa

One of the prime attractions of Kalpa is the Kinnaur Kailash Mountain also known as the Kinner Kailash Mountain in the local language. It is considered to be sacred by the locals of the region. A Shiva Lingam measuring 70 m in height sits on top of the peak which attracts a large number of devotees and tourists all year round. The Sangla Valley situated on the banks of the Baspa river is another prominent attraction, which rests at an altitude of 8900 ft above sea level.

Travellers who are interested in architecture can visit the Kamru Fort, the Naga Temple and Sapni, which are renowned for their architectural excellence. Tourists can also check out the Chini Village, which is known for its rich heritage and tradition. Situated at an elevation of 2290 m above sea level is the city of Reckong Peo which offers a panoramic view of the Kinnaur Kailash Mountain.

The Suicide Point is another prominent spot, which is just 10 minutes away from the apple orchards. Adventure enthusiasts can also enjoy Trekking in the region and further explore the scenic beauty of the place. Most of the natives in Kalpa earn their livelihood by selling beautifully weaved shawls and Kinnauri caps. The beautiful amalgamation of Hindus and Buddhists cultures is reflected in the culture of Kalpa, which is interesting to see.

How To Reach Kalpa

Travellers can easily reach Kalpa via airways, railways and roadways. For travellers who wish to travel by air, the Shimla airport is the nearest air base to Kalpa. It is situated at a distance of 276 km from the village of Kalpa and is connected with major cities like New Delhi, Mumbai and Kullu.

Travellers can also reach Kalpa by road via NH-22 (Hindustan-Tibet Road), which deviates from Powari to Kalpa. Travellers can take both state owned and private buses from nearby cities such as Shimla and Rampur to Kalpa. In addition to this, tourists can also avail buses from the Rohtang Pass, which is only open during the summer season.

The minimum temperature recorded during summers is 8° C. This place receives unpredictable rainfall during monsoons; therefore, tourists are suggested to carry rain gears while visiting Kalpa during this time. Travellers are suggested not to visit this place during winters as the temperature of the place may drop down to a minimum of -10° C.

The best time to visit Kalpa is the summer season as the temperature of the place remains moderate during this time.

Kalpa is Famous for

How to Reach Kalpa