Travel To The Guhagar Beach, A Tropical Paradise 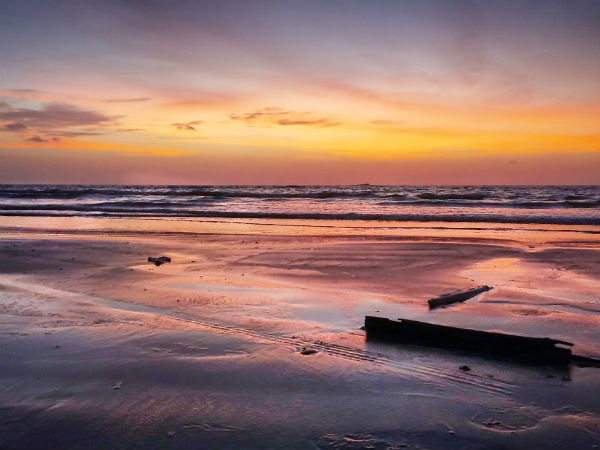 Nestled between the Vashishti river and Jaigad creek, Guhagar is a tiny town located in the coastal Maharashtra. The coastal Maharashtra region, also called the Konkan coast, is well-known for its pristine beauty, virgin beaches, and abundant natural beauty. This Konkan beauty, Guhagar, lives up to the fame.

Guhagar meaning a 'cave house', when translated in the local language, is a popular weekend destination from the nearby cities and towns. The combination of white sandy beach, glistening turquoise waters and a golden sunset makes it a perfect holiday destination. In fact, the place has a promenade built to witness the stunning sunset at the beach.

Guhagar is famous for its secluded beaches. It is the first beach along the Konkan coast, with textured white sand, unlike any other in the region. Guhagar, with its gourmet Konkani cuisine and tropical fruits like Alphonso mangoes, cashew nuts and jackfruits, is a popular destination for food lovers as well.

The town held a significant place in the political history of Maharashtra, connecting it with the Peshwas, who were the Prime Ministers in the Maratha Empire. Along with a rich history and culture, Guhagar is also known for its heritage temples. There are numerous ancient temples across the charming town.

Guhagar is well-connected by road with Mumbai, Pune, Ratnagiri and Chiplun. The nearest airports are in Mumbai and Pune, at a distance of 300 km and 290 km, respectively. The nearest railway station is at Chiplun, which is at a distance of around 47 km from Guhagar. Regular State Transport buses shuttle between these cities and Guhagar.

Due to its proximity to the sea, Guhagar experiences a moderate and humid climate through most time of the year. Summers get pretty hot and humid and is generally avoided by tourists. Many travellers visit the place during monsoon for a magical experience. Winter is pleasantly cool and is the most preferred time to visit Guhagar.

The pristine Guhagar Beach has a long stretch of white sandy shore, laced with shady Suru trees. It is almost a 6 km long beach spread between two hillocks. Walking on the clean, silky white sand of the Guhagar beach is a riveting experience. Although, there are many entry points, the main entry to the beach is from behind the Vyadeshwar Temple.

The Vyadeshwar Temple is located right in the centre of the town and is around 100 metres away from the Guhagar bus depot. It is an ancient stone temple dedicated to Lord Shiva and is one of the main pilgrimage centres. There are numerous temples in Guhagar that can be visited.

Located about a kilometre from the Guhagar bus depot, is another beautiful temple complex. Known to be one of the oldest temples dedicated to goddess Durga, it has been recently renovated. The temple is set amidst a very beautiful lush green location. Devotees flock in large numbers here during the Navratri festival each year.

About 17 km from Guhagar is a small village of Hedvi, which is famous for its beach and a Dashabhuja Ganesh Temple. The temple is perched atop a hill and carved in white stone. Dedicated to Lord Ganesha, the idol here has 10 arms. The Hedavi beach is also famous for its natural gorge, which transforms into a tall cascade during high tides.

Perched atop a steep hillock, the Anjanvel Lighthouse is located about 14 km from the Guhagar bus stand. The lighthouse offers beautiful, panoramic views of the sea and the town below. It is especially mesmerizing to view the sea at sunset from here. Another ancient temple called the Talkeshwar Temple located near the lighthouse can also be visited.

Comments
Read more about: maharashtra beach temples pune ratnagiri travel chiplun mumbai heritage
Other articles published on Apr 18, 2017
We use cookies to ensure that we give you the best experience on our website. This includes cookies from third party social media websites and ad networks. Such third party cookies may track your use on Nativeplanet sites for better rendering. Our partners use cookies to ensure we show you advertising that is relevant to you. If you continue without changing your settings, we'll assume that you are happy to receive all cookies on Nativeplanet website. However, you can change your cookie settings at any time. Learn more
Change Settings Continue