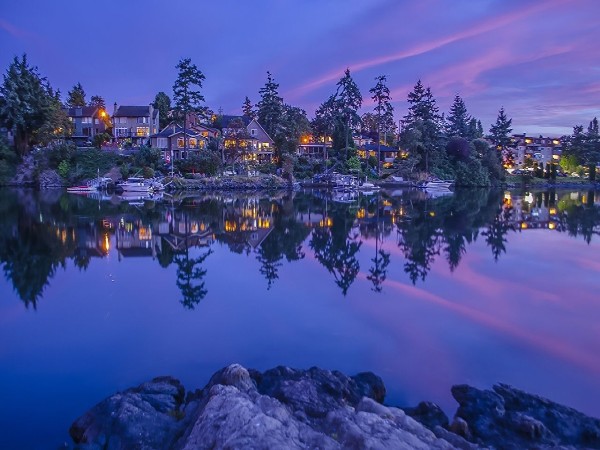 In the Pacific Ocean west of Prince Rupert in British Columbia, the Queen Charlotte Islands are the peaks of a submerged mountain chain. The seven largest islands of the 1,884 islands and islets in the archipelago are Langara, Graham, Moresby, Louise, Lyell, Burnaby and Kunghit. Graham Island in the north and Moresby Island in the south make up most of the archipelago's landmass.

Just 2 km (1.2 mi) into the sea, the continental shelf falls away dramatically to the immense depths of the ocean, and this is Canada's most active earthquake area.

The islands are known as Haida Gwaii (islands of the people), or Xhaaidlagha Gwaayaai (islands here for at least 7,000 years. The first European contact was in 1774 when Juan Perez discovered what is perhaps one of the most beautiful landscapes in the world. Fur trader's impact on the Haida. In 1787, the islands were named by the British in honour of Queen Charlotte, the wife of King George III.

Despite European interference, the islands have kept their natural tranquillity and have a rich cultural history. The Haida earn their living through mining, logging and commercial fishing, and nowadays tourism is also a good source of income. Most Haida communities can be found on Graham Island. At Skidegate there is a cultural centre was Haida artefacts and local art are, at Tiell, there is an artistic collective, and Old Masset is home to traditional native carvers.

Naikoon Provincial Park, in the northeast of Graham Island, covers a range of diverse environments including sandy beaches and dunes, sphagnum bogs, ancient forests and rivers. The landscape was formed during the last ice age out of the deposits left by retreating glaciers. The main attraction here is the endless stretches of broad sandy beaches. On the North Beach is Tw Hill, a 100 m outcrop of basalt columns which make a dramatic landmark. Also worth exploring is Rose Spit, an ecological reserve where you can spot migrating birds travelling over the Pacific.

The Gwaii Haanas National Park Reserve and Haida Heritage Site is south of the archipelago. This wilderness area of 138 islands stretching 90 km from north to south is only accessible by boat or chartered aircraft. Mountains rise steeply to the west, and the coastline is dotted with picturesque inlets, bays and Islands. Rainforest and upland big, salmon streams, estuaries and kelp beds sustain a rich diversity of life here. This is a great place to observe whales, bald eagles, nesting seabirds, black beats, river otters and sea lions.

This is a remote area with little development, so do not expect busy resort hotels with all the tourist comforts.