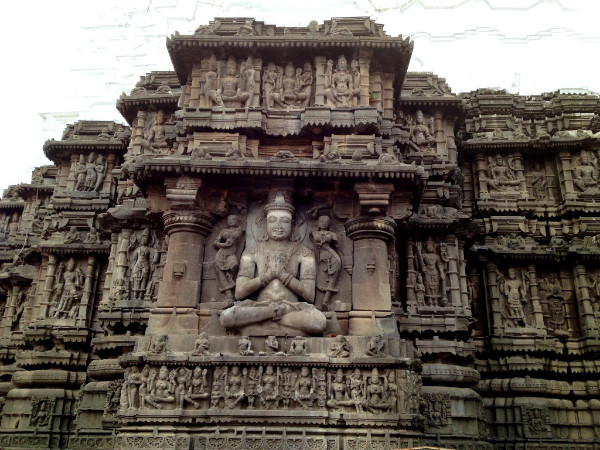 Jyotirlinga temples are some of the most prominent temples for the Hindus. According to the Shiva Purana, there are 12 Jyotirlingas, and Lord Shiva is worshipped in different forms in each of these temples in India.

Jyotirlinga means 'the radiant Shiva Linga'; legend has it that Lord Shiva manifested his 'sign' Lingams in 12 different places to beat an argument with Brahma and Vishnu. Thus, Jyotirlinga temples were formed. The Aundha Nagnath Temple in Maharashtra is one of the most famous Jyotirlinga temples in India.

Among the 12 Jyotirlingas, 5 of them are situated in Maharashtra. And the devotees throng these holy places in large numbers every year.

History of the Aundha Nagnath Temple

The Aundha Nagnath Temple was built during the time (13th century) of the Yadava dynasty. The temple, which is the 8th among the 12 Jyotirlingas, is one of the beautiful architectural sites in the country. The shrine is also associated with Varkari Saints like Namadev, Visoba Khechara and Jnaneshwar who are said to have spent many years creating bhajans in this temple.

The Aundha Nagnath temple is not just a beautiful architectural wonder with fascinating legends, but it is said to be a very important pilgrimage site, where devotees visit and worship the lord in large numbers.

Nandi Located Behind the Temple

It is common to see the Nandi statue facing the Lingam in every temple; however, in the Aundha Nagnath Temple, the Nandi statue is located behind the shrine. This is a rather peculiar feature of this Jyotirlinga temple, in which the reason behind such a feature is still unknown.

It is said that the Sikh guru, Guru Nanak, visited the Aundha Nagnath Temple during his religious tour. He is also said to have visited the birth place of the saint Namadev on his visit to this temple.

Legend of the Aundha Nagnath Temple

One of the famous legends is about the poet-saint Namadev and the challenge given to him by the other saints Jnaneshwar and Muktai.

As per the story, when Namadev came to this temple in search of a Guru, to his surprise, he finds saint Visoba standing inside the sanctum with his feet on the Shiva Lingam.

Enraged by this behaviour of his, Namadev asks Visoba to take his feet off the Lingam. However, as an answer to that, Visoba asks Namadev to place his feet anywhere else.

To Namadev's surprise, a Lingam appears at the places where Namadev keeps his feet. He later gets to know that saint Visoba could cause these Lingams to appear due to his yogic powers.

Through this, the lesson that saint Visoba wishes to teach Namadev is that God is omnipresent. Thus, saint Namadev finds his Guru in Visoba.

Sculptures at the temple

Architecture of the Aundha Nagnath Temple

How to Reach the Aundha Nagnath Temple

By Bus: MSRTC buses are available from major cities like Mumbai, Pune, Aurangabad, etc., to Nanded and Aundha Nagnath.