Maharashtra - A Land Of Forts, Hill Stations And Beaches 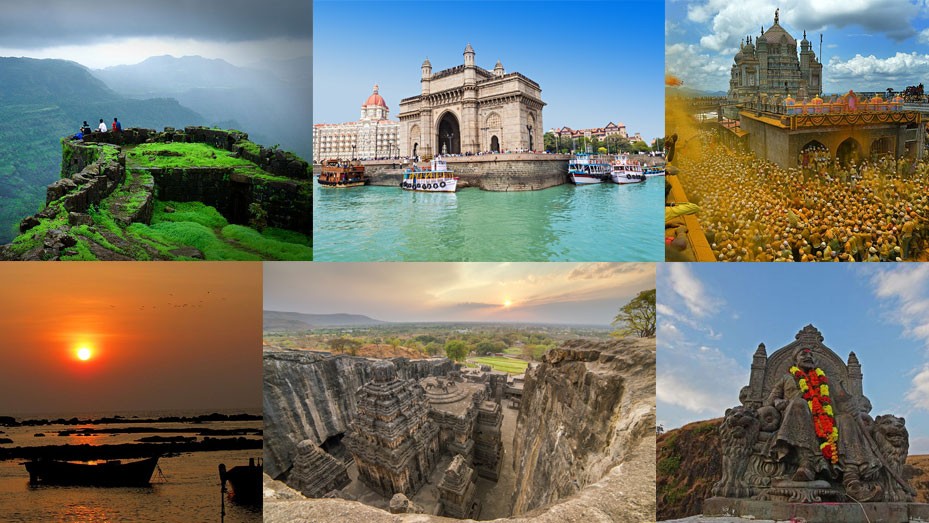 The second most populous state in India, Maharashtra, is an ethereal state defined by its sundry mountains, panoramic beaches, breathtaking sceneries and a wide array of museums, monuments and forts that stand as a testimony to the illustrious, rich history of India. Not to mention that these make tourism in Maharashtra interesting and indulging. Few theories suggest that Maharashtra derived its name from the combination of the Sanskrit word ‘Maha’–that means great–and ‘Rashtra’ that finds its origin in the Rashtrakuta dynasty. Others meanwhile say that ‘Rashtra’ translates to a nation in Sanskrit.

Maharashtra entered the chapters of history in and around the 2nd century BC, when the first-of-its-kind Buddhist caves were constructed. Huan Tsang, the renowned Chinese traveller was the first one to mention Maharashtra in his works in the 7th century.

History has it that the state had its first ever Hindu king during the 6th century. Amongst all other leaders, the most prominent personality that Maharashtra has seen is Chhatrapati Shivaji Maharaj. The founder of the great Maratha Empire, Shivaji famously fought the Mughals and constructed several forts all around the state. Post his death, the reign of Maharashtra came under Sambhaji, his son and later on was passed over to the Peshwas. Soon enough, in 1804, General Wellesley, from the East India Company, established a military rule in Maharashtra and the Deccan area and Peshwas remained nominal rulers of the region. The state that we know as Maharashtra today was formed in 1960 and Bombay (now Mumbai) was made its capital.

Maharashtra – A Land Of Historic Forts, Lofty Hill Stations And A Lot More…

Maharashtra is characteristic of a stupefying diversity that involves misty mountains that stretch on ends, verdant lustrous forests, rustic gigantic forts and holy religious spots. The state comprises of around 350 forts. They define the glorious streak of the Maratha rulers in Maharashtra. Most of these forts identify with Chhatrapati Shivaji, who is believed to have been responsible for almost thirteen forts. The twin forts of Vijaydurg and Sindhudurg are considered as the best sea forts within the state. At a distance of about 120 km from Pune, the Shivneri Fort is another iconic fort that is famous for being the birthplace of Shivaji. The Pratapgad Fort is reminiscent of the epic battle between Shivaji and Afzal Khan. Other forts like the Ajinkyatara Fort, the Murud-Janjira Fort, the Harishchandragad Fort, the Lohagad and Visapur forts make for excellent Trekking points.

These, in fact, are integral aspects of Maharashtra tourism. With so many majestic points in the Sahyadris, the hill stations in Maharashtra are hard to miss. The state is home to some stunning hill stations that are wrapped in greenery and provide breathtaking views of the panoramic surroundings. Most of them were founded by the British as their summer retreats. Lonavala, Khandala, Matheran, Panchgani, Mahabaleshwar, Sawantwadi, Jawahar and Toranmal are few of the many prominent hill stations making Maharashtra tourism indulging.

The proximity of these points to the major cities of Mumbai, Pune and the like make them not only a hotspot for tourists, but also a major attraction and getaway option for domestic dwellers.Maharashtra tourism also boasts of a host of Museums for history lovers. Around thirteen museums are sprawled across the state, some of the significant ones are – the Tribal Museum at Pune, the Prince of Wales Museum and Jehangir Art Gallery at Mumbai. The Coin Museum in Nashik is a one-of-its-kind museum that exhibits the history of coinage in India and makes for an interesting watch. The National Maritime Museum, the Shahaji Chhatrapati Museum and the Mani Bhavan Mahatma Gandhi Museum are other museums situated here. Given its location by the Arabian Sea, Maharashtra translates to a long sultry coastline with numerous pristine beaches. One can go to plush beaches like the Marine Drive Chowpatty in Mumbai or earthy ones like the Bassein Beach.

The beaches at Velneshwar and Shriwardhan-Harihareshwar are for adventure lovers who want to indulge in some water sports. The Dahanu Bordi Beach and the Vijay Sindhudurg Beach are both mesmerising stretches that pose as the perfect relaxing spot.Maharashtra is also a major religious hub. There are several pilgrim spots that dot the state, adding to the numerous shades of Maharashtra tourism. The famous Kumbh Mela is held at Nashik every three years, while the Mumba Devi temple is a renowned temples located in the city of Mumbai. The Kailash Temple in Aurangabad and the holy sites of Shirdi, Pandharpur and Bahubali are equally famous and revered.

The Haji Ali Tomb is more than eight centuries old, while the Takhat Sachkhand Shri Hazur Abchalnagar Sahib of Nanded is one of the most important Gurudwaras in the state. The Osho Ashram in Pune is another spiritual spot that offers meditation and yoga courses. The Mount Mary Church in Mumbai is an extremely famous church that holds the Bandra Fair annually and sees hordes of devotees throng its gates. The Ajanta and Ellora Caves, the Elephanta Caves, the Mahalaxmi Temple and the Gateway Of India are some of the iconic destinations in Maharashtra that are a must see. They happen to be the crowning glory of Maharashtra tourism. Maharashtra is a resplendent state based in India. Its cultural diversity is at par with its architectural and natural variety. The colourful languages, cultures and cuisines make Maharashtra a perfect blend that resonate Indian-ness like few other states do. A visit to this magnificent place should be on your cards. You will cherish the memories that it leaves you with for the rest of your life!