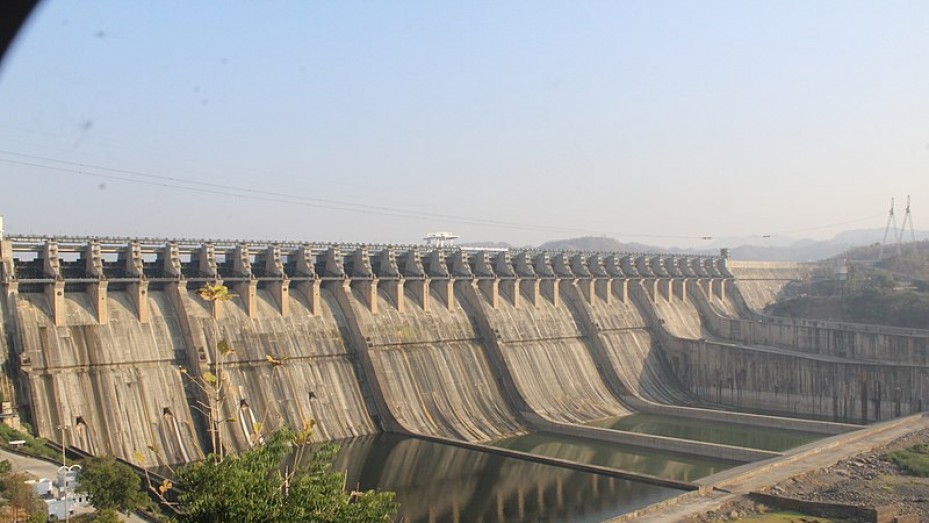 A dam built on the Narmada river, Sardar Sarovar Dam, is 1163 km from the river estuary. The foundation of this dam was laid by Jawaharlal Nehru in 1961 and ultimately, the construction work started in 1979.

It is the largest dam on Narmada river, built in order to use the unexplored water resources of Narmada for the development of people and the environment. This dam helps in providing drinking water, irrigational water and hydro-power for the whole of Gujarat. Kevadia is a town close to this dam. Built as an employees' colony, it is gradually becoming an important tourist destination due to its natural beauty and other tourist facilities available here. Religious places related to the holy river Narmada like Chandod, Kabirwad and some Shiva Temples are also frequented by the tourists.

The dam, apart from being popular as the largest dam of the Narmada Valley Project, is also known for the controversies involved in the project. Though the World Bank was the initial funder of the project, it withdrew from the same in 1994. The dam has been a centre for controversies, since the late 1980s. The height of the dam also has been increased several times with the approval of the state government inspite of the popular protest against the same.

The State Government of Gujarat also plans to set up solar panels in the Narmada canal to generate solar power, which can be utilised by the villagers in Gujarat. This also would help in reducing the evaporation of the precious water resource.

Tourist Places In And Around Sardar Sarovar

There is a guided tour facility in the dam reception, which also has a map that shows the details of all the six points to visit. The points are - a garden, the foundation stone, a lake for boating, the first lock gate and a trekking point for students participating in nature camps. The height of the Sardar Sarovar Dam is 128 m and it's still increasing.

Proximity Of The Dam To Other Attractions

The best time to visit the dam is at the starting of winter during the months of October and November, as one can get the best possible weather.

How To Reach Sardar Sarovar

It is accessible by air, road and train.

Sardar Sarovar Dam is Famous for

How to Reach Sardar Sarovar Dam