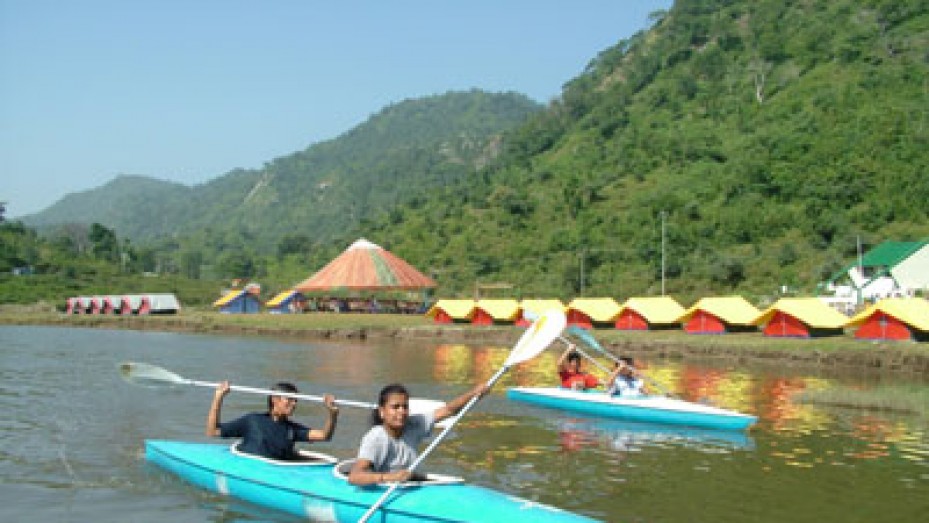 Morni Hills or Bhoj Jabial is one of the renowned tourist spots of Haryana. It is the highest point of Panchkula as well as Haryana. It is situated at a distance of 45 km from Chandigarh. The name is supposedly derived from the queen who once ruled this place. The scenic view of the Himalayas with lakes and different species of flora is breathtaking.

Morni Hills is a part of the Shivalik Hills of the Himalayas. Other than the hill station, there is also a village which goes by the same name. Two lakes are present amidst the hills. Though they are separated by a hill there lies a hidden link between them as the water level of both the lakes almost remains the same. These lakes are considered holy by the local inhabitants.

Swimming pool, roller skating rink and playground for children are available here. An ancient fort is also present which is almost in ruins. Morni Hills has always remained one of the favourite hubs for trek enthusiasts. Tikkar Taal, Bada Tikkar and Chota Tikkar are small manmade lakes at Morni Hills.

The Haryana Tourism has made arrangment for the accommodation of campers at Tikkar Taal. These lakes are situated at a distance of 7 km from the township of Morni. The serene surrounding supports camping.

These lakes are also attracting tourists as Panchkula's first adventure park. The park was inaugurated in 2004 by Haryana Tourism. Its objective was to popularize lower Himalayan region as an adventure destination. Low ropes, commando nets, Burma bridge, boating, canoeing, kayaking, sailing, rappelling and rock-climbing are some of the activities to be enjoyed by the travellers.

The climate is quite healthy and the landscape is apt to enjoy trekking. River Ghaggar flows through these valleys. A motel is perched on the top of the hill which overlooks the spellbinding valley. It is featured with green lawns and a bar. Pine trees mostly cover the peak of the hills. A trek to the Ghaggar river bank is also adventurous as a narrow path leads the way.

Morni Hills is an ideal place to relax and rejuvenate in the lap of nature, far away from the hustle and bustle of the city. As the spot is not thoroughly explored, many facts remain hidden to the tourists. A variety of flora paves the way all through. Many villagers reside here whose basic occupation is agriculture.

Neem, pepal, jamun, dhak and pine are some of the plants which form the greenery around Morni Hills. As these trees flower during spring the view is a treat to the eyes. Doves, quails and sand grouse are some of the birds found in the hilly region. Sambhar, hyena and jungle cat are the wildlife of Morni Hills.

Haryana Tourism has arranged for packages for better convenience of the travellers. Accommodations are tented where sleeping bags are provided. Transportation is not included in the package.