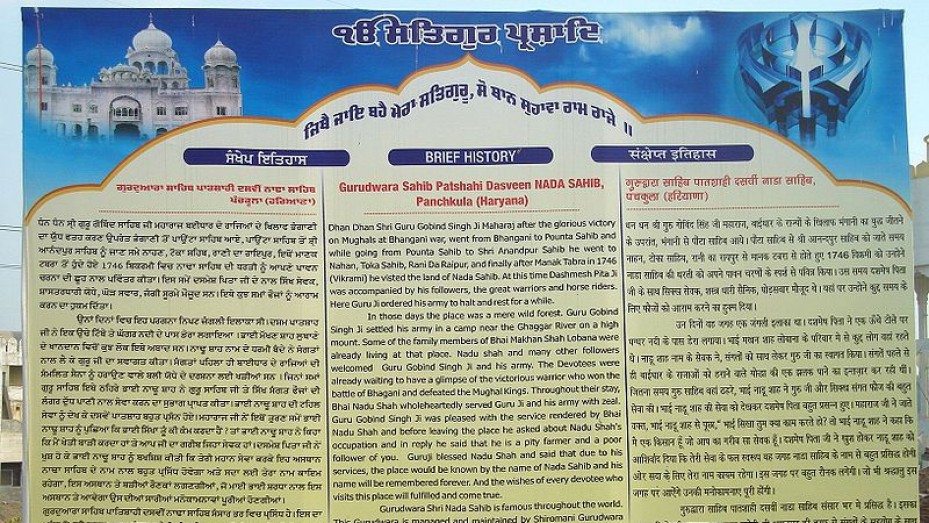 Nada Sahib is one of the religious places in Panchkula. This gurudwara is situated 15 km from the city by the bank of river Ghagar and on the foothills of the Shivalik. It is very much popular among Sikhs. According to history, Guru Gobind Singh along with his fellow warriors stayed at this place after defeating the Mughals in the Battle of Bhangani.

Nadu Shah, one of the followers of Guru Gobind Singh welcomed the victorious warriors and was blessed by the guru. Thus the gurudwara is named after him as Nada Sahib. Infinite Sikhs pay a visit on full moon day or Pooranmashi of every month. It is a celebration for them as people from entire North India turn up for this occassion.

The original Manji Sahib constructed by Motha Singh has been replaced. Presently it is a double storeyed doomed structure. The Meeting Hall lies adjacent to it. Guru ka Langar and accommodation for pilgrims are present in a different complex. It is separated from the main Gurudwara by a brick courtyard.

By the shrine the holy flag is seen flying which soars high in the sky. Community meals and religious gatherings are organized daily. A new building with three storeys has been planned for parking and Langar Hall. Also, a museum focussing on Sikh history is coming up.