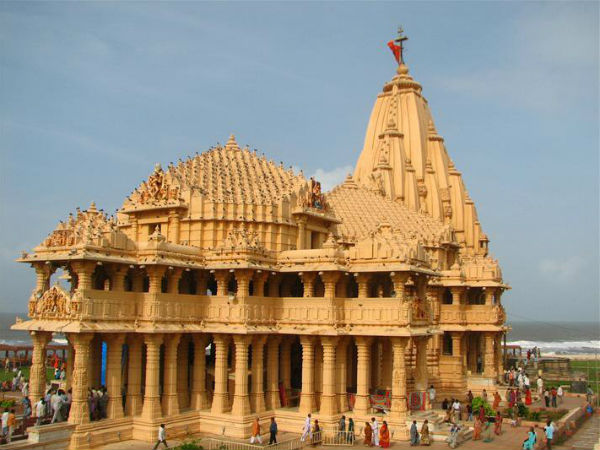 The beautiful Somnath Temple stands facing the blue expanse of the Arabian Sea on the western coast of Gujarat in Prabhas Patan, historically known as Dev Patan. The temple is located approximately 94 km from Junagadh in Gujarat. Prabhas Patan is around 6 km from the Veraval City and was a part of the former princely state of Junagadh, during the pre-independence period.

With its stunning architecture, the Somnath Temple is a famous place of pilgrimage. It is one of the twelve Jyotirlinga Shiva Temples in the country. The Jyotirlinga Temples hold a major significance in Hinduism and these holy shrines are believed to be the places where Shiva manifested as a fiery column of light.

The legendary Somnath Temple is known to be destroyed and rebuilt more than six times over the centuries. It is, therefore, also known as the 'Eternal Shrine' that which has withstood the test of times and ravage of attackers.

There are many myths and legends tagged to the temple. As per one, the ancient temple of Somnath is believed to be built by Som - the Moon god himself. It is said that due to a curse the Moon lost its gleam. To break the curse, he took a holy dip at the site of Prabhas Patan, which is also a confluence of three holy rivers - Hiran, Kapila and the mythical river Saraswati, and prayed to Lord Shiva. Hence, Lord Shiva appeared here as 'Somnath' - Lord of the Moon, who freed him from the curse.

Also read: Travel to the 7 Unique Shiva Temples in India

Architecture Of The Somnath Temple

There is no known information about the construction of the original temple. It is said that the Moon god had built the temple out of gold. Later in the Tretayug (one of four ages of mankind in philosophy), the demon king Ravana, who was a great devotee of Lord Shiva, rebuilt it in silver. Lord Krishna, in the Dwaparyug, built it again using sandalwood. At some point in time around the 10th century, King Bhimdev of the Solanki dynasty rebuilt the Somnath Temple in stone.

The present day temple is believed to be the seventh structure and is built in the Chalukyan style of architecture. The rich architecture reflects the fine work and mastery of the artisans with its intricate carvings and ornate silver works on the columns and doors. The shikhara or the main spire of the temple is 15 m high and an 8.5 m tall flag pole is perched on the top of it.

Also read: Unique Temples Not to be Missed in India!

Interestingly, the Banastambha or the Arrow Pillar erected on the sea-protection wall at the temple, has a Sanskrit inscription which reads that the Somnath Temple is situated in an extraordinary way that there's no land in a straight line between the Somnath seashore and Antarctica.

How To Reach Somnath Temple?

By Road: Veraval and Somnath Temple (which is 6 km from Veraval) are well-connected by roads with national highways to major cities and states. Private or state transport buses can be availed. Self-driving is another option preferred by some travellers.

By Rail: Somnath Railway Station is the closest railhead, which connects to places like Ahmedabad, Rajkot, Porbandar, Jabalpur, etc. The distance between the Somnath railway station and Somnath Temple is about 3 km.

By Air: Diu Airport is the nearest airport to reach the Somnath Temple. It is approximately at a distance of 80 km. Taxi can be hired from the airport for the temple.

Other Places To Visit Near Somnath Temple

Being a place of pilgrimage, there is galore of temples in and around the place. If one is interested, they can visit the Triveni Sangam, or the confluence that is dotted with numerous temples like the Suraj Mandir, that is dedicated to the Sun god, Lakshminarayan Temple, Geeta Mandir, and the Parshuram Temple where Sage Parshuram is believed to have meditated.

Another site visited by travellers is the Panch Pandav Gufa. It is a historical cave temple that is believed to be the place where the Pandava brothers stayed during their exile. At a distance of less than 5 km from the Somnath Temple is the Bhalka Tirth Temple. It is believed that this was the place where Lord Krishna was mistakenly shot with an arrow by a tribal hunter.