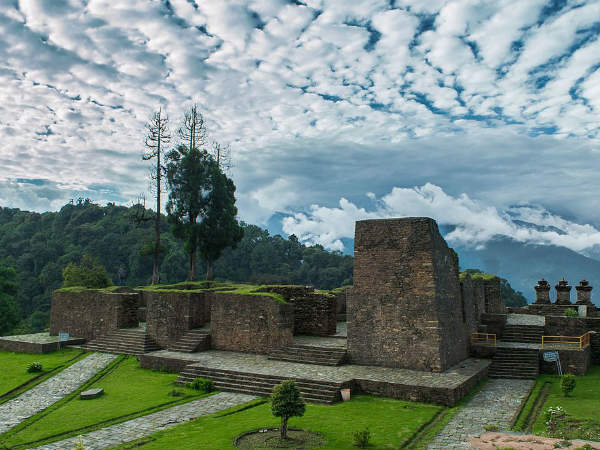 Blessed with the beauty of mountains, forests, valleys and hills, Sikkim certainly seems like a door to heaven. Its natural beauty is assuredly incredible and worth remembering. But very few of us know that Sikkim has a remarkable history. If you have ever tried exploring the offbeat trails of Sikkim, you would know that it is home to numerous historical sites and ancient monuments. Some are popular all over the state, several across their locality and a few of them are unknown and hidden.

So, if you are fond of scrutinising such untold destinations, then let us take you through the historical aisles of Rabdentse in Sikkim. Read on to know more about this legendary town which has lost its charm in the pages of history.

With a subtropical highland climate, Rabdentse experiences a bearable climate throughout the year, and hence it is a year-round destination. However, the best time to visit it is from June until the end of November. During this period, the weather is pleasant and favourable.

The History And Surroundings Of Rabdentse

Located in the West Sikkim district of the state in the vicinity of Pelling, Rabdentse was the capital of Sikkim Empire in between the late 17th and the early 19th centuries. The capital was shifted from Yuksom to Rabdentse by Chadog Namgyal, the son of the first king of Sikkim.

Later on, the city was destroyed by the Gorkhas, and today only its ruined structure can be seen. However, it is still a prominent place for history lovers. As it is located atop a hill, it provides its visitors with the commanding views of the nearby villages and towns.

Why You Should Visit Rabdentse

If you are a history lover and would love to find yourself amid these ruins which have in store a lot to be explored, then Rabdentse is your calling this season. After all, it is hard to find such places everywhere in India. On one hand, you can learn in detail about the history of this ruined capital and on the other hand, you can capture the unexplored natural beauty of Sikkim.

Once you are done exploring the beauty of Rabdentse ruins, you can visit its nearby attractions. The list of tourist spots near Rabdentse includes Pelling, Sangha Choeling Monastery, Kanchenjunga Falls and Pemayangtse Monastery, which is one of the most prominent and oldest monasteries in Sikkim dating back to the early 18th century.

How To Reach Rabdentse

By Air: The nearest airport to Rabdentse is located in Siliguri at a distance of about 137 km. Once you have reached Siliguri, you can either hire a direct cab or use the public transport to reach Pelling and then from there, you need to walk up the hill to reach Rabdentse Ruins. The distance between Pelling and Rabdentse is 9 km.

By Rail: The best way to reach Rabdentse by rail is by taking a train to New Jalpaiguri railway station and then from there, either a bus or the public transport to Pelling. The distance between New Jalpaiguri and Pelling is 135 km.

By Road: Located atop a hill, you need to trek up the hill to reach the ruins. However, you can easily reach Pelling by road.