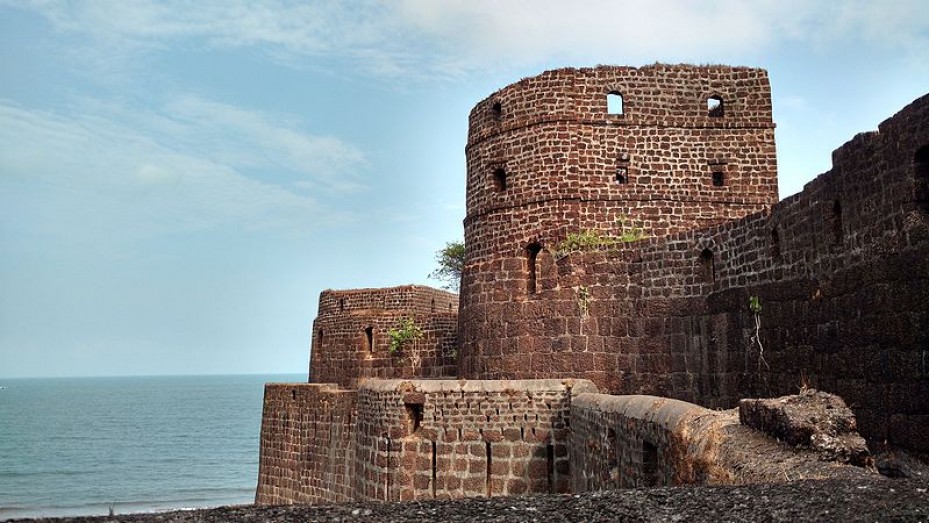 A small town located in the Maharashtra state, Vijaydurg lies along India’s coastline. It is at a distance of around 485 km from Mumbai and lies in the district of Sindhudurga. It was formerly known as Geriah. Its idyllic location between the Arabian Sea on one side and the Sahayadri Ranges on the other makes it a place worthy of visit.

The town of Vijaydurg and the district of Sindhudurg as a whole served as a naval base during the Maratha rule. Even today it is a functioning seaport. Vijaydurg poses as an ideal place to de-stress after a hectic weekend. Virgin, untouched beaches, historical forts – Vijaydurg has a lot to offer to the quintessential tourist.

The beaches are lined by a thick green forest rich with coconut trees and palms. Mango plantations fill the entire region with the heavenly smell of juicy Alphonso mangoes ever summer. There are typical houses made of red wood and stapled roofs that increase the beauty.

Tourist Places In And Around Vijaydurg

Vijaydurg is famous for the Vijaydurg Fort – also known by the name Fort Victor – that was built by Maharaj Shivaji during his Maratha rule in India. It was built more than 300 years back, in the 17th century. The Fort was also called Gheriya as it was surrounded on three out of the four sides by sea.

The fort was a force to be reckoned with during the Peshwa and Maratha rule, and considered to be invincible by the penetrating foreign enemies who attempted their very best to ravage the place. The fort has three layers of walls built around it, and several towers and buildings within the vicinity, making the fort formidable.

It is stretched out on an area of 17 acres. Built on a massive scale, this fort was captured at one point by the Britishers, who renamed the Fort to Fort Augustus or the Ocean Fort. Architectural enthusiasts will delight in the charm that this centuries-old structure still manages to captivate visitors with.

The fort is an architectural genius because of the manner in which Shivaji took advantage of its location. The Kharpetan creek linked to this fort makes entrance of large ships and vessels into the vicinity practically impossible.

This area was used to harbour the warships of the Maratha clan. This fort hence earned the name of the ‘Eastern Gibraltor’. There is also a platform that was constructed in the Arabian sea for the purpose of guarding – another marvel worth checking out.

The naval dock is one place where the Maratha warships were repaired. It went by the name Wagjotan Creek, placed about a kilometre and a half away from the fort. This is interestingly the one of the only two forts where Shivaji embarked the saffron flag.

The Torana Fort is the other place. The nearby area sees numerous temples with idols of various deities ranging from Maruti to Mahapurush and Mahadeo. There also exists a rustic, age-old temple known as the Rameshwar Temple. It is famous amongst worshippers and Hindu followers.

What To Not Miss Out On, While You're There!

You cannot visit the town of Vijaydurg and not taste the local flavour here. The Malvani Curry is high on the list of ‘Must-Try’ while you are here. Sol Kadhi is another item that cannot be missed. Fish devotees will be delighted in the variety of fish delicacies available here.

The people here are warm and hospitable. Accommodation shouldn’t be a problem too. If you happen to travel to Vijaydurg during the season of summer, don’t forget to eat the fresh and juicy Alphonso mangoes and jackfruits that are grown here. Pay a visit to the Cashew Factory and witness how cashew nut is processed.

The semi tropical climate at Vijaydurg ensures a year round pleasantness. Travelling during the summer season is usually advised against, given the heat of the surging temperature. The monsoons see abundant rainfall and transform this region into a panoramic sight.

Vijaydurg is easily accessible from all parts of Maharashtra, and even outside it. If you are travelling by air, Panaji comes as the closest airport, where from you can set upon a short journey by hiring a cab. If travelling by train, one can get down at either of the two stations of Kudal and Rajapur.

Vijaydurg is well attached by road to all the major cities like Pune, Mumbai and many more by means of buses that are state owned or private. The Government of Maharashtra is focussing its energy towards developing the town of Vijaydurg into tourism material.

So whether you are an architecture buff or simply a curious traveller who wishes to take pride in belonging to this marvel of a country, visiting Vijaydurg will help you do just that!