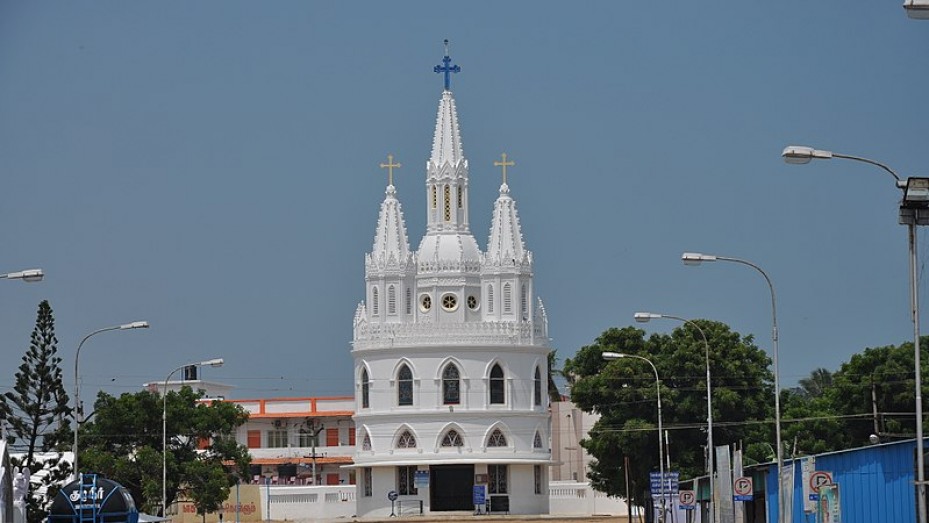 Situated on the Coromandel Coast of Tamil Nadu, Velankanni is a spiritual destination frequented by people of all faiths and religions. Located in the district of Nagapattinam, Velankanni is home to the Shrine of Virgin Mary. The shrine is dedicated to the Madonna of Velankanni, often referred to as Our Lady of Health. From Chennai, Velankanni lies about 325 kilometres to the south and is easily accessible.

The Land Of Miracles

Virgin Mary is believed to have appeared in Velankanni in 1560 and the town’s rich religious character dates back to this time. According to popular belief, Mary requested a shepherd for milk so as to quench the thirst of her baby, Lord Jesus. A chapel was erected at this location to commemorate this incident. Velankanni is often called the Land of Miracles, a name that stems from the many miracles rumored to have taken place in the town.

One of them goes as follows: a Portuguese trade vessel faced the wrath of the Bay of Bengal in the form of a storm during the 17th century. The despondent sailors are believed to have vowed to construct a chapel in the name of the Virgin Mary at whichever point of land they managed to reach safely.

According to legend, the tempest receded and the Portuguese vessel landed upon the shores of Velankanni on the 8th of September, the birthday of Mary. The existing chapel was redecorated by the sailors keeping in line with their promise.

Five hundred years later, almost two million pilgrims have visited Velankanni to observe the celebration of this miracle. The Shrine of Our Lady has become one of the most popular religious sites in the country during this period.

Other miracles believed to have been witnessed here include two apparitions by the Virgin Mary. In the first apparition, a pot of milk being delivered to a customer by a Hindu boy was found to be full despite the boy giving Mary a share of the milk. The latter apparition deals with the curing of a crippled boy who offered Mary buttermilk.

A Tale Of Sorrow And Hope - The Tsunami Devastation And Beyond

Disaster struck this picturesque town on the 26th of December, 2004 as a massive tsunami triggered by the Indian Ocean devastated Velankanni. Many lives were lost in the ensuing chaos, and it remains one of the biggest tragedies to have hit the southern coast of India in history.

Rebuilding and rehabilitation started immediately following the large scale destruction to property and life, and the humanitarian efforts undertaken in the aftermath of the disaster prove to be a glowing testament to Velankanni and its residents.

The only traces of the tsunami in the town currently are the live videos of the disaster, sold at the new shops that came up in place of those destroyed by the natural disaster.

Tourist Places In And Around Velankanni

Velankanni has a number of places to visit, among them are Velankanni Church, Museum of Offerings, Shrine Depot and Velankanni Beach. The Fountain of Revelation, the Holy Path and the Lady’s Tank Church are also places of interest for tourists.

The town has a number of modern conveniences, such as ATMs, hotels, homestays and a railway station. In the Shrine Depot, it is possible to purchase handicrafts and other religious materials.

An information counter in the same building is of use to those who are looking to gather more information about the town in general or Velankanni’s folklore in particular.

How To Reach Velankanni

Tourist planning to go to Velankanni can reach here via air, road and rail.

The best season to visit Velankanni is between October and March.

Velankanni is Famous for

How to Reach Velankanni