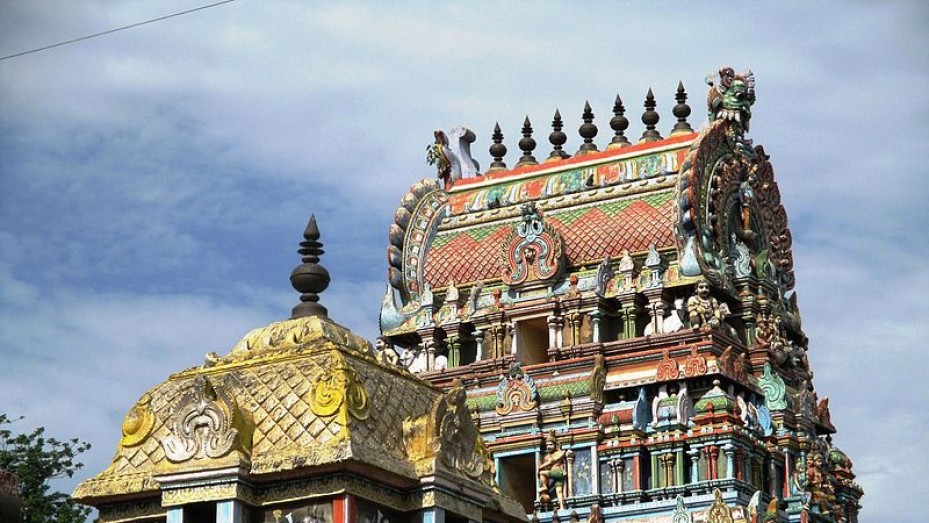 Mayiladuthurai literally translates as “the peacock town”. Mayiladuthurai is a portmanteau of three words, Mayil meaning peacock, Aadum means dancing and Thurai is a place. The name “Mayiladuthurai” stems from a legend that says Parvathi who donned the form of a peahen because of a curse and worshipped Lord Shiva in the town that is Mayiladuthurai today.

The town, earlier known by its Sanskrit name, Mayuram, was recently de-Sanskritised and renamed Mayiladuthurai, the Tamil translation of “Peacock town”. Today Mayiladuthurai is a town that is just as modern as the next; what sets Mayiladuthurai apart, however, is it’s strong, deep, irrevocable roots in history.

The Mayuranathaswami temple in Mayiladuthurai reinstates the legend. The temple dedicated to Lord Shiva shares its name with the name of the town. The presiding deity is called Mayuranathar, as Parvathi worshipped Shiva in the form of a Mayura (peacock) here. While the legend cannot be proved or disproved, the name has stood the test of time.

Temples Galore – Tourist Places In And Around Mayiladuthurai

Suriyanar Koil, 20 km west of Mayiladuthurai is the centre of the circuit, around which all other temples are constructed. The temple is dedicated to Surya and his wives Chaya and Suvarcha. Thingaloor, 40 km west of Mayiladuthurai dedicated to the Moon God is rumoured to help devotees who have psychological issues. Pilgrims come here to get rid of their sorrows and mental pressures.

Vaidheeswaran koil, 12 km east of Mayiladuthurai is renowned for being the holy site where the eagle Jatayu slain by Ravana attained Moksha. The place where he was cremated to this day is called “Jatayu Kundam”. The temple dedicated to Shiva is believed to cure devotees of illnesses. The temple is famed for housing astrologers who employ a method of fortune telling that is called Nadi Jyothidham.

Thiruvenkadu, 24 km east of Mayiladuthurai is also called “Saiva Tirumurais”. As in Kashi, Thiruvenkadu has numerous bathing ghats. Students flock to this temple to offer prayers for favourable results.

Alangudi, 40 km outside of Mayiladuthurai, a temple for Lord Guru is unique for being one of a very few temples that have the lord’s figurine engraved on the wall instead of an idol that is the norm. Kanjanur, near Suriyanar koil 20 km outside of Mayiladuthurai, is a temple dedicated to Shukra. Devotees firmly believe that the blessings of Shukra ensure wealth and prosperity.

Thirunallaru, 30 km east of Mayiladuthurai, is one of the very few temples solely dedicated to Lord Shani. The temple is also a portmanteau (Nala + Aru) named after King Nala Maharaja who was relieved or healed (Tamil translation of Aru) of the malevolent afflictions caused by the influence of Saturn or Shani. It is widely acknowledged that a dip in the holy nala theertham will wash away bad karma or malevolent afflictions that Shani can cause.

Thirunageswaram, near Kumabkonam is dedicated to Lord Shiva. Lord Rahu, however, takes the spotlight as milk abhishekham performed every day at rahukaalam is a miracle in itself. The milk poured over the statue starts out white, turns blue as it passes over the idol and turns white again as it reaches the floor. This temple is also one of the few temples that depict Lord Rahu with his consorts.

Keezhaperumpallam near Thiruvenkadu is dedicated to Lord Kethu. Also known as Vanagari, the temple idol, Lord Kethu is depicted as having the head of a snake and the body of an Asura. Lord Kethu is believed to have worshipped Lord Shiva here in repentance for his sins. The idol therefore is depicted as worshiping Naganathar (Lord Shiva) with folded hands.

Devotees regularly embark on the Navagraha pilgrimage trail, in hopes of pleasing all the nine grahas or stars. People firmly believe that appeasing the stars or the grahas will ensure a long, happy, healthy and prosperous lifetime.

Mayiladuthurai – A Link Between Neolithic Tamil Nadu And Harappa Civilization

When V. Shanmuganathan, a school teacher, dug a pit in his backyard in February 2006, little did he expect to find anything other than mud, let alone a rare connection to history. V. Shanmuganathan, banking on his knowledge of archaeology, identified two stone celts that he discovered as being from a different era.

The Neolithic celt, (a hand held axe) with inscriptions in Indus language confirmed that the Neolithic people of Tamil Nadu shared the Indus language with people of the Harappa civilization. Archaeological finds such as these are rare, but the chances of finding something of significance in an area such as Mayiladuthurai with history at every turn is significantly higher.

Mayiladuthurai is, veritably a history enthusiast’s pot of gold. The saying “Ayiram anaalum Mayuram agaadhu” which translates into “a thousand different places with a thousand different specialties can never compare to Mayuram” might just hold true with regard to the confluence of historical and contemporary life.

How To Reach Mayiladuthurai

Mayiladuthurai is easily accessible by rail and road.

Winter is the best time to visit this area.

Mayiladuthurai is Famous for

How to Reach Mayiladuthurai