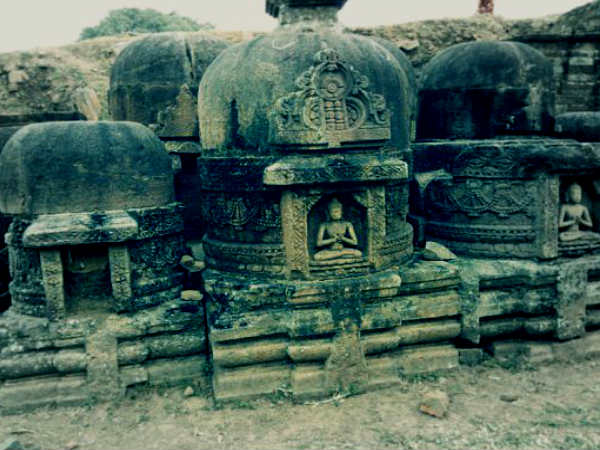 The largest concentration of Buddhist remains can be found at three sites- Ratnagiri, Udayagiri, and Lalitgiri, referred to as the "Diamond Triangle". The sites consist of a series of monasteries, temples, shrines, stupas, and beautiful sculptures of Buddhist images. Their rural setting, amongst fertile hills and paddy fields, are both picturesque and peaceful.

Read on to discover more about Odisha's three most important Buddhist sites.

Ratnagiri, "Hill of Jewels", has the most extensive Buddhist ruins in Odisha and is of great importance as a Buddhist site both for its magnificent sculptures and as a center for Buddhist teachings. One of the first Buddhist universities in the world, rivaling the renowned one at Nalanda (in Bihar state), is believed to have been located at Ratnagiri. The massive stone sculptures of Lord Buddha's head at Ratnagiri are particularly awe-inspiring. More than two dozen heads of various sizes, magnificently depicting the serene meditative expression of Buddha, were found during the excavations. They're considered to be fine works of art.

Udayagiri, "Sunrise Hill", is home to another large Buddhist complex in Odisha. It consists of a brick stupa, two brick monasteries, a stepped stone with inscriptions on it, and numerous rock-cut Buddhist sculptures. Another attraction at Udayagiri is a gallery of Buddhist rock-cut images, overlooking the Birupa river (locally known as Solapuamaa). There are five images consisting of a standing life-size Boddhisattva, a standing Buddha, a goddess seated over a stupa, one more standing Boddhisattva, and a seated Boddhisattva.

The ruins at Lalitagiri, while not being as extensive as those at Ratnagiri and Udayagiri, are notably from the oldest Buddhist settlement in Odisha. Major excavations carried out from 1985 to 1992 unearthed evidence of it being continuously occupied from the 2nd century BC to the 13th century AD.

Odisha's "Diamond Triangle" of Buddhist sites (Ratnagiri, Udayagiri, and Lalitagiri) is located in the Assia hills, around two hours drive north of Bhubaneshwar. The nearest airport is in Bhubaneshwar while the nearest major train station is in Cuttack.Travellers who wish to visit the sites independently can stay at the Toshali Hotel in Ratnagiri. It's conveniently located opposite the Archaeological Museum and very close to Ratnagiri's Buddhist attractions. Udayagiri is under 10 kilometers drive from Ratnagiri, while Lalitagiri is approximately 20 kilometers away.

Best Time To Visit The Site

The cooler dry months from October to March are the most comfortable and preferable time for travellers visiting the buddhist sites. The weather gets quite unbearably hot during April and May and is not ideal for travellers travelling to Odisha.

Comments
Read more about: buddhist sites udayagiri ratnagiri
Other articles published on Oct 8, 2013
We use cookies to ensure that we give you the best experience on our website. This includes cookies from third party social media websites and ad networks. Such third party cookies may track your use on Nativeplanet sites for better rendering. Our partners use cookies to ensure we show you advertising that is relevant to you. If you continue without changing your settings, we'll assume that you are happy to receive all cookies on Nativeplanet website. However, you can change your cookie settings at any time. Learn more
Change Settings Continue