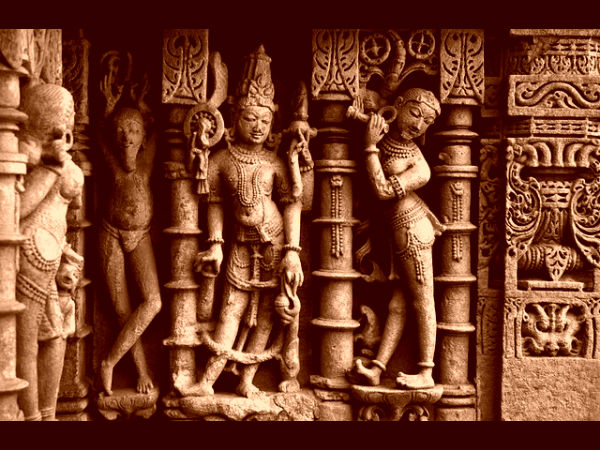 Rani Ki Vav is a beautiful example of engineering and architecture from the Solanki dynasty period. Built by the Queen Udyamati, Rani Ki Vav is located in Patan on the erstwhile banks of river Saraswati. It was intended as a memorial to her late husband King Bhimdev I. This unique stepwell is a rather recent discovery, only excavated in the late 1980s after being hidden for centuries under layers of silt. Here are some lovely images of Rani Ki Vav.

This inverted temple structure, paying homage to the element water, was originally divided into seven storeys, of which only five remain today. The terraces have pillared pavilions showcasing intricate sculptures of the various Avatar's of Lord Vishnu, sadhus, kings and dancing Apsaras. The images of dancing Apsaras at Rani Ki Vav demonstrate the different stages of make-up, known as 'Solah Shringar'.

The rectangular complex, houses over 1500 sculptures of main deities as well as religious motifs and intricately designed geometric patterns. The stepwell built in the 11th century AD is proof of the quality of workmanship, having withstood the passage of time fraught with natural calamities and wars.

Besides being nominated for the World UNESCO Heritage Site in February 2013, the monument has also been visited in the past by other foreign delegates. The Scottish Ten team along with Archaelogical Survey of India(ASI), digitally documented the monument and its many well-preserved sculptures. The data is currently being used for conservation programmes and heritage management at Rani Ki Vav. Today it is the 31st UNESCO World Heritage Site in India.

Here are some images taken at Rani Ki Vav, depicting a few of the 10 avatars of Lord Vishnu. With its many sculptures of Lord Vishnu, the stepwell has significance as a holy place. A conglomeration of art, history and spiritual elements, makes Rani Ki Vav a must-see for all.

The third avatar of Lord Vishnu is depicted as a boar. As per literary references, Varaha Avatar rescued Bhumidevi (earth) from under water after defeating Hiranyakasyap. Bhumidevi was said to be so happy on being rescued that she married Adi Varaha.

Kalki is the last of the 10 Lord Vishnu avatars and is expected to be incarnated at the end of Kali Yug. He is depicted as riding a horse and carrying a blazing sword.

Until 2001, visitors were allowed to walk till the end of the stairwell. But after the Bhuj earthquake, the stability of various parts were compromised. Today, certain sections are closed to public viewing. The ASI is working on conserving the stepwell against further damage. Efforts to recover other lost sections of palaces and temples in the vicinity is also underway.

How to Reach Rani Ki Vav

By Road: Intercity buses are available from Ahmedabad to Patan (3.5 hr) and from Mehsana (1 hr). Taxi jeeps on sharing basis are also available.

By Rail: The nearest railway station is Mehsana, after which you will need to proceed by road.

By Air: The nearest airport is Ahmedabad.