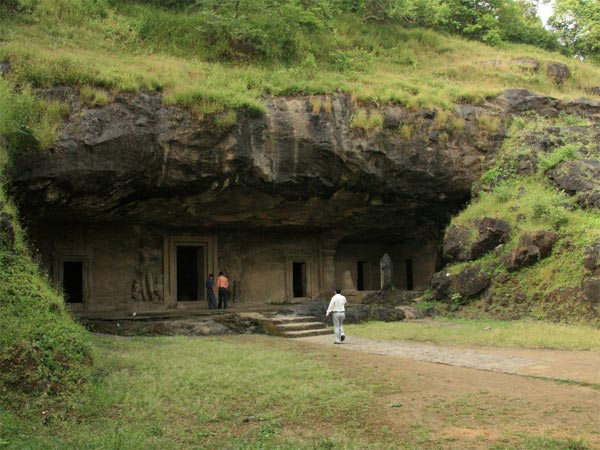 When we think of travel, we almost always think of visiting far away places and seeing new things. But sometimes travel could simply mean visiting the unexplored corners of your own city or town. One lazy weekend I had nothing much to do. As I sat sipping the morning tea, I realised that there are so many places in Mumbai that I still haven't explored. Without further thoughts, I decided to explore the Elephanta Caves - one of the places I had been meaning to visit for far too long. I quickly packed a day bag and trotted out.

I boarded the local train headed for Chhatrapati Shivaji Terminus. This historic railway station is itself among the UNESCO World Heritage Sites in Mumbai. Life is Mumbai is a busy and fast paced one, and one can see the local trains crowded even on a Sunday morning. The train halted at the destination, and I hailed a black Ambassador taxi with a bright yellow roof, that was once synonymous with Mumbai. After a short drive amidst the less crowded lanes of the town, I was standing at the magnificent Gateway of India - one of the famous landmarks of the city.

Also read: Traveling Through Some Of The Oldest Railway Stations In India

So while the Victoria Terminus, now called the Chhatrapati Shivaji Terminus, was built to commemorate the Golden Jubilee of Queen Victoria, the arch of the Gateway of India was erected to commemorate the visit of the King and the Queen to India in 1911. Now a major tourist destination, the Gateway of India is flocked by a large number of tourists as well as locals each day; weekends especially see a lot of visitors.

I headed to the ferry point at the Gateway of India, also called Apollo Bunder, and booked a ticket for the next ferry going to the Elephanta Island. There are frequent ferries to the island, typically at an interval of 30 minutes. It is approximately an hour-long journey to reach the island and vice versa. The last boat from the Gateway to Elephanta leaves at 2 pm. Similarly, the first boat leaves from Elephanta at 12 pm and the last one leaves by 5.30 pm. The caves are closed for visits on Mondays.

Also read: Things Not to Miss in Mumbai!

The Elephanta Island, also called Gharapuri - meaning 'city of caves', is home to the stunning Elephanta Caves. The island is thickly wooded and fringed with mango, palm and tamarind trees. Tourists are not allowed to stay on the island for overnight halts. During the day, however, one can rest at the rest house set up by the Maharashtra Tourism Development Corporation (MTDC). To reach the caves, one can take a flight of 120 odd steps or board the narrow gauge mini train.

There are two cave complexes, the large one consists of five Hindu caves and the smaller one comprises two Buddhist caves. Carved skillfully out of solid basaltic rocks, these intriguing rock-cut caves date back to an unknown time period somewhere between 5th and 8th century. Though the caves and sculptures have suffered severe damage, you can still find them appealing even if only to think how grand they once would have been.

Also read: Hidden Buddhist caves in and around Mumbai

For the historians, art and architecture lovers, the Elephanta Island is nothing short of a treasure trove. Exploring the ancient caves is a thrilling experience. The main cave is also called the Shiva cave and has a huge hall with four doors, three porticoes, several pillars and chambers. Large carvings on the walls depict Shiva in various yogic poses and also as Nataraja - the cosmic dancer.

Many legends and stories of Shiva are carved on the walls of the caves, some of which are Shiva-Parvati's divine nuptial and others where Shiva is slaying demons. There's another damaged sculpture which shows Shiva and Parvati sitting on mount Kailash - their abode, and the demon king Ravana is shaking it. Other carvings depict the Ardhanarishwara - the half man, half woman form of Shiva and Gangadhar - the form where Shiva contained the river Ganga in his matted locks. The Trimurti sculpture is also another important (though damaged) feature of these caves.

Locals believe that the caves are not man-made and the fact that there's no inscription or evidence whatsoever proving otherwise, anywhere on the island and the fact that several studies and researches have not been able to fetch that information, makes my mind, eventually, believe the local legends.

As if transported back in time, I walked around the caves stunned at the superhuman task of carving out such archaeological gems out of rocks, achieved by the artisans of unknown times. I sat on a huge rock opposite to the caves, marvelling at them with thoughts lingering in my mind, until it was time for me to board the last ferry leaving the island for the day.