Nativeplanet
»
Travel guide
»Ever Been To This Hanuman Temple Where He Is Worshipped As A Female?

Ever Been To This Hanuman Temple Where He Is Worshipped As A Female? 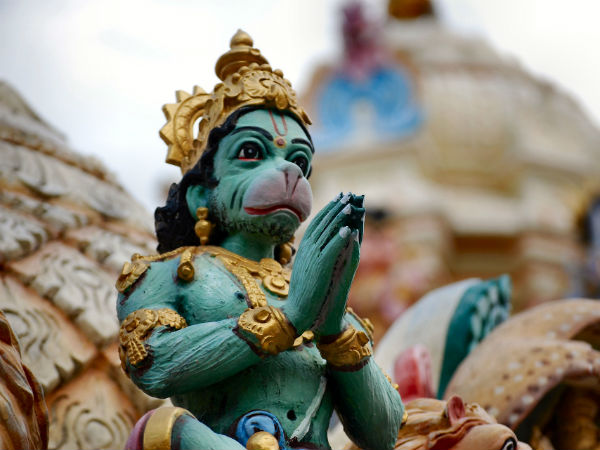 The presence of unconventional places in each and every town or village of India has become a common thing nowadays. But there are still certain places which are way too unusual that they leave every visitor astonished. Well, do you know about any such place? If not, then let us tell you that the state of Chhattisgarh harbours a lot of such places. So, if you are fond of exploring these unconventional sites, then you must plan a tour of Chhattisgarh this season.

The region in and around Ratanpur experiences hot summers, and hence you should avoid visiting it during the summer season. The best time to visit Ratanpur is from October until the end of March. During this period, the temperature conditions are favourable and the weather is cool and pleasant.

The History And Formation Of The Temple

The Hanuman Temple is located at Girjabandh in the Ratanpur district of Chhattisgarh and is believed to have been in existence for centuries. As per local legends, it is said that the temple was built by Prithvi Devju, a local king who was suffering from leprosy, after he saw Lord Hanuman instructing him to build a temple in a dream.

As he was his ardent devotee, he vowed to build a temple dedicated to his lord. When the construction of the temple was about to be completed, Lord Hanuman appeared in his dream again and asked him to bring an idol from the nearby Mahamaya Kund and install it inside the temple. But when he reached the place and searched for the idol, he found it in a female form.

Being a devotee, he came back with that female idol of Lord Hanuman and kept it inside the temple. Soon he got cured of leprosy. Since then, the temple has been there and is visited by hundreds of locals every year. Does it fascinate you? How about a visit to this strange Hanuman Temple this season?

Why You Should Visit This Temple

Wouldn't you love to witness this unusual beauty which cannot be found elsewhere in the world? If yes, then you must plan a visit to Girjabandh in Ratanpur. Apart from learning about the history of the temple, you can also explore the surroundings of Girjabandh, mingle with the locals and experience a countryside life.

How To Reach Ratanpur

By Rail: The best way to reach Ratanpur by rail is by taking a direct train to Bilaspur, which is located at a distance of about 25 km. From the station, you can hire a direct cab or catch a public vehicle to reach your destination.

By Road: Ratanpur has a good road connectivity and is well connected to all other cities and towns. Hence, it is easily accessible by road.