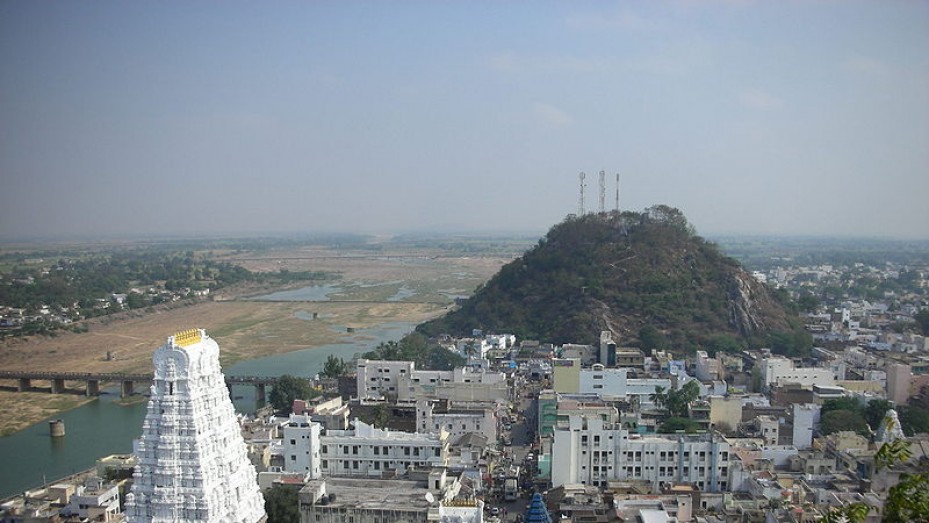 Kalahasti is the informal name given to Srikalahasti, a municipality near the holy town of Tirupati in Andhra Pradesh. This town, which is also considered one of the holiest places in India, was founded on the banks of the river Swarnamukhi.

Srikalahasti gets its name from the combination of three words; Sri, Kala and Hasti. The word Sri stands for spider, Kala for snake and Hasti for elephant. All the three animals are known to have prayed to Lord Shiva and attained salvation at this place, and a statue picturing these three animals is placed in front of the main shrine.

Srikalahasti is among the most important Shiva Kshetras or Temples of Shiva in the southern part of India. It is one among the Panchabootha Sthalams symbolising air, of the five elements.

In fact, the popular and revered Srikalahasti Temple is built on the area between the base of the hill and the bank of Swarnamukhi. This is the reason the place is famously referred to as Dakshina Kailasam. Srikalahasti is known as Dakshina Kaashi in reference to the holy town of Kashi located in the northern part of India.

The place is representative of the Vayu Sthalam or the element of Air. According to a legend, Lord Shiva took the guise of Vayu or air and witnessed the devotion with which the spider, cobra and the elephant worshipped Him. The God was so impressed with their devotion that he freed them of their curse and these animals are believed to have attained salvation at this place.

The town of Srikalahasti finds mention in three Puranas, namely the Skanda Purana, the Shiva Purana and the Linga Purana. According to Skanda Purana, Arjuna came to this place to worship Kalahastiswara (Lord Shiva) and met Rishi Bharadwaja on the peak of a hill.

The first poetic reference to Srikalahasti can be seen in the 3rd century works of Nakkeerar who was a poet during the reign of the Sangams. It was Nakkeerar, a great poet who gave the town the name of Dakshini Kailasam. Dhoorjati was a Telugu poet who settled in Srikalahasti and wrote hundred stanzas in praise of the town and Sri Kalahasteesewara.

Sri Adi Sankara also came to the place and was impressed by the devotion of Bhakt Kannappa and mentioned it in Sivanandalahari. Kalahasti is almost synonymous with Bhakta Kannapppa, popular among the devotees of Shiva, who gave his eyes for the Lord! The story of his devotion is well known to the worshippers of Shiva and the Hindu community at large.

Srikalahasti is best known for the temples built in this place which attract millions of pilgrims every year. The temples are dedicated to Lord Shiva and Lord Vishnu who are worshiped in various forms. Kalahasti came under the rule of many dynasties which had many temples constructed in there. Thus, every temple in the town has its unique style of architecture that is in keeping with the styles of the time and the preference of the then king.

The Kings belonging to the Chola and Pallava Dynstasies as well as those of the Vijayanagra Empire have all left their indomitable mark on the architecture of the various temples that were built during their times. It is believed that many of the kings of the Vijayanagra Empire preferred their coronation in the pious and peaceful atmosphere of the temples rather than in the opulence of the palaces.

King Achutaraya was coronated in the Hundred Pillared Mantapam in Srikalahasti before he went back to his capital city to hold celebrations.

Tourist Places In And Around Kalahasti

The legendary temples located in Kalahasti offer a divine travel experience to tourists and devotees alike. Among the most famous temples of Kalahasti are the Sri Sri Subrahmanya Swamy Temple, Bharadwaja Thirtham, the Kalahasti Temple and the Sri Durga Temple.

The place experiences hot and humid summers and therefore, travelling to Kalahasti during summer months is not advised.

How To Reach Kalahasti

Kalahasti enjoys decent connectivity and be reached by train and by road. Temples that boast of magnificent architecture and an air of divinity lingering in the surroundings contribute to the popularity of Kalahasti, making it a favourite destination for those who are in search of tranquility.

Kalahasti is Famous for

How to Reach Kalahasti