Tongariro's Volcanoes: A Symbol Of Destruction But Also Life 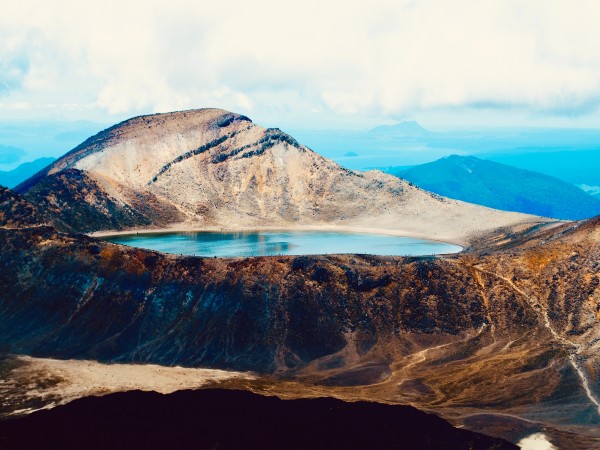 A giant white plume of steam and gas rises almost continuously from the crater of Mount Ngauruhoe, a 7516ft (2291m) volcano in the heart of New Zealand's North Island. It is one of a trio of active volcanoes. To the north is Mount Tongariro, a complex mass of truncated peaks comes and creates, and to the south stands Mount Ruapehu 9176ft (2797m) the highest of North Island's peaks. The three volcanoes form the nucleus of the Tongariro National Park.

Mount Ngauruhoe - pronounced ' Narahoce' - is the most spectacular of the three. It is the Classic volcano, a steep-sided come topped by a crater 1300ft (400m) across, and has been continually active at least since Europeans first settled in New Zealand in the 1830s. Every few years it stirs into more dramatic action and spouts ash which then rains down over the surrounding countryside.

Less frequently, Mount Ngauruhoe explodes with colourful violence, sending lava flowing down the mountain and reshaping its profile. In 1954 red-hot lava spouted into the air and, a witness reported, made 'continual grating and clanking noises' as it moved.

Eruptions also bring changes to the crater itself, and secondary cones form and reform within the main crater. Snow covers the top of Ngauehoe's cone in winter. Ruapehu, however, is snow-capped all year and is a magnet for skiers who combine the excitement of the sport with the risks of skiing on an active volcano. The dangers are real. Ruapehu's crater lake breached its rim in 1953, cascaded down the mountainside carrying boulders and ice, and swept away a railway bridge, causing a train crash that killed 151 people. A similar flow in 1969 crossed a skiing area - but at night.

On a flank of the many-cratered Mount Tongariro is a bizarre landscape known as Ketehahi Springs. Here geysers throw fountains of boiling water into the air, pools of boiling mud bubble and plop like a giant withes' cauldron, blow-holes thunder deafeningly and the heavy, pungent smell of sulphur hangs in the air.

As volcanoes go, Ngauruhoe's activity began in the area about 2 million years ago, but Ngauruhoe, actually an offshoot of nearby Tongariro, was formed a mere 2500 years ago.

In Maori legend, volcanic activity was brought to North Island by a Tohunga - a person with special powers. The tohunga Ngatoro-i-Rangi is said to have travelled southwards from his warm Polynesian home, noticed the snow-covered peak in the distance and set out to climb it. He took with him his female slave Auruhoe and told the rest of his party to fast while he was away.

Ngatoro's companions, however, disobeyed him and broke the fast, and the goals, in their anger, sent blizzards to the mountains. Ngatoro prayed to his gods, and they replied with fire which received Ngatoro. But it came too late to save Auruhoe, and the Ngatoro hurled her frozen body into the crater at the peak which now takes her name.

The three volcanoes were sacred to the Maori. They buried their chefs in craves on the mountainsides and tried to deter Europeans from climbing them. The English botanist J.C. Bidwill reached Ngauruhoe's summit in 1839 and tried to explain to an angry local chief afterwards that he had not harmed because although the mountain was sacred to Maoris, the taboo did not apply to white men.

Ngauruhoe came to life during Bidwill's ascent. He heard a noise 'not unlike that of a safety valve of a steam engine' that lasted about half an hour and saw a thick column of black smoke rise for some distance, and then spread out like a mushroom. When he reached the crater the volcano emitted a great roar, and Bidwill beat a hasty retreat, as he 'did not wish to see an eruption near enough to be either boiled or steamed to death.