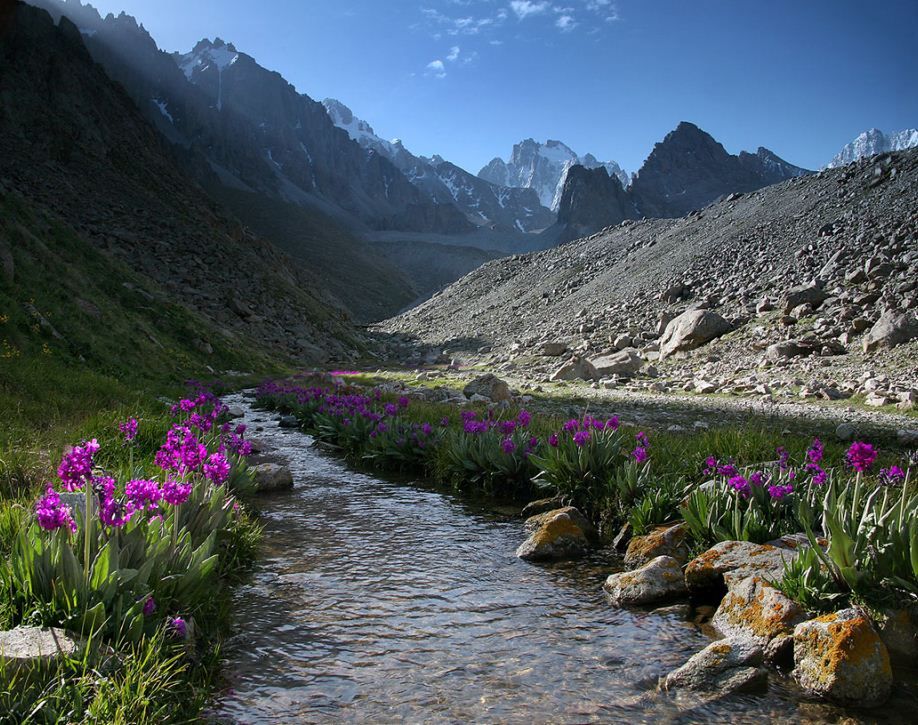 Violas (Pansies) of every hue - from yellow, white and deep purple to blue - lured an English wanderer, Charles Howard-Bury, after he had strolled up through the woodland to the alpine fields of the Heavenly Mountains (Tien Shan Mountains) in July 1914.

'So close were they when they grew', he noted, 'that every movement would crush them.' Further, he documented that he had never anywhere else, had seen such lush flora -every blossom that is grown in palace gardens seemed to be illustrated.

Ascending from parched deserts to snow-capped peaks and glacier-covered ridges, the cliffs stretch for 1700 miles (2865km) across Mainland China to central Asia. Maybe the picturesque beauty of their vertical slopes, deep ravines, running streams, alpine fields and gleaming snowfields assembled all in one region the Chinese anoint them the Tein Shan (heavenly mountains), Peter Semonyov, a Prussian, was the first European to discover them in 1852, with an entourage.

From Almata they ascended to Lake Issyk-Kul- the atmosphere blue 'hot waterway', so-called because it never gets frozen. It is the world's most extensive mountain lake, 4 times the size of the Indian Capital, Delhi.

It is documented in the history books that Tamerlane, the 15th-century Turkic leader, forced his army to carry stones from the lake shore and stack them by the Santash Pass when they traversed the mountains, presumably to strike the Chinese. On the return, each man took a stone from the stack; by the number, Tamerlane knew how many army men lost their lives.