The Vanishing Shrine Of Nishkalank Mahadev In Gujarat 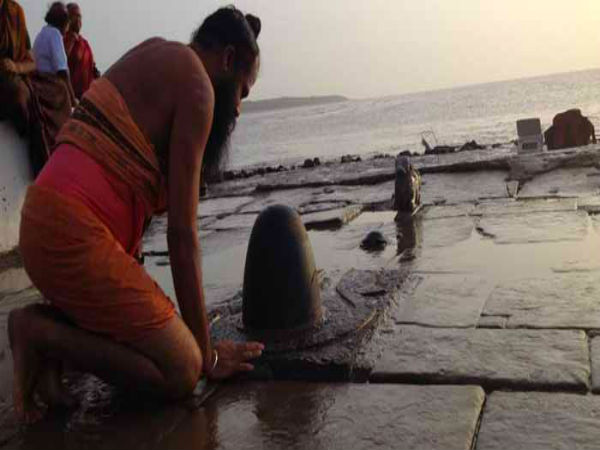 Ever thought of a temple in the weirdest of places, like under the sea? But wait! Hindu temples can be found over hills, mountains, inside caves, on seashores, close to waterfalls and many other places where nature is seen at her best.

The temple in the present context is the Nishkalank Mahadev Temple, which is located in Bhavnagar and is completely submerged during high tides in the sea and emerges during low tides. It promises the devotees a chance to wash away all their sins, in the same way the Pandavas were forgiven for the sin of killing their cousins.

The shrine is 2 km inside the sea and can be reached only once the water levels recede. The structure is immersed in the sea and can be seen only during a certain period of time. One can identify the shrine with the help of a tall flag placed at the shrine. The tides are active especially during no moon and full moon days and devotees eagerly wait for the tides to disappear on these days.

According to historians, the temple was built by the Pandavas after the Kurukshetra War. The temple was built with a special care to withstand high tides and is truly an architectural marvel. The structure truly remains an unsolved mystery to modern engineers and technology experts.

Legends Associated With The Pandavas

After the Pandavas emerged victorious in the battle of Kurukshetra after killing all the Kauravas, they began to feel guilty for the killings and for sins of killing their relatives. To discover reclamation for their sins, Pandavas consulted Krishna who handed them a black flag and a black cow and asked them to trail them and said when both the flag and the cow turn white, they will all be forgiven; Krishna also asked them to apologise to Lord Shiva after that.

The Pandavas followed the cow everywhere it took them and acknowledged the flag. They marched for many years to various places, yet the shades did not change. Finally, when they reached the Koliyak Beach, both the cow and the flag turned white; soon the Pandavas meditated on Lord Shiva and apologised for the sins committed by them.

Impressed by the brothers, Shiva appeared to each of them in the form of a lingam. One would come across 5 self-originated lingams, which were offered worship by all the five brothers who named them Nishkalank Mahadev. Nishkalank in translation means being spotless, clean, innocent, etc. The Pandavas installed the lingams on Amavasai or new moon night along with a Nandi at the front of each lingam on a square platform.

The temple is open on all days; however, it is accessible only for a few hours when the water level recedes. High and low tides occurs everyday and the amplitude of tides at the coast is influenced by the alignment of the sun and the moon. During full moon and new moon, when the earth, sun and moon are in line, both the high and the low tides are at their maximum levels and hence, it is the best time to visit the shrine.

Comments
Read more about: travel india nature gujarat temple religious travel beaches
Other articles published on Nov 30, 2017
We use cookies to ensure that we give you the best experience on our website. This includes cookies from third party social media websites and ad networks. Such third party cookies may track your use on Nativeplanet sites for better rendering. Our partners use cookies to ensure we show you advertising that is relevant to you. If you continue without changing your settings, we'll assume that you are happy to receive all cookies on Nativeplanet website. However, you can change your cookie settings at any time. Learn more
Change Settings Continue