The Timeless Beauty Of The Himalayan Hamlet Of Nako 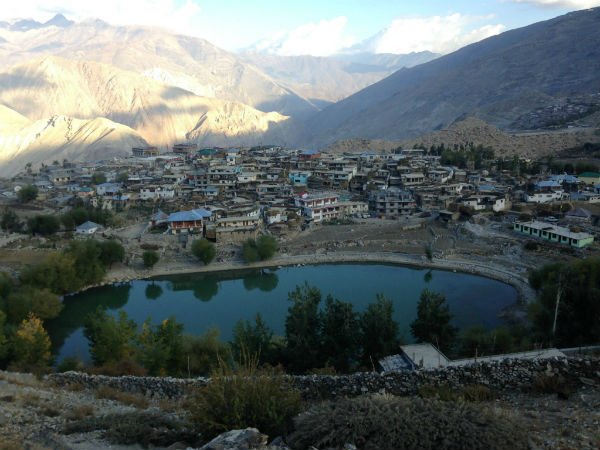 Tucked away amidst the rows of dusty brown mountains of the Himalayan ranges, is the hidden hamlet of Nako. Perched at an elevation of about 12000 ft, this rustic village is located in the Kinnaur district of Himachal Pradesh. The tiny village is situated at a surreal location in the trans-Himalayan region, close to the Indo-China border. Its remote location makes it less-visited but absolutely rewarding.

As you travel from the Reckong Peo - the headquarters of Kinnaur district, the landscape significantly changes. Vast orchards of apple and apricot replace the buildings and structures, cool weather becomes chilly, roads become narrower and seem to be rising higher and higher at every turn, small groups of villagers replace the semi-urban crowd, and you find yourself encompassed by the giant mountains which seemed far-off a while ago.

Since Nako is a tiny, remote village, it is that spot where one would want to relax, rejuvenate and soak in the beauty of the Himalayas. Breathe the freshest and cleanest air possible, and let the old world charm of the place seep into you. However, there's so much to do and see in Nako, for those who look forward to new experiences.

Himachal Pradesh is known as the ‘Apple Bowl of India', and therefore, apple orchards can be found all across the state. The main agricultural produce of Nako is apple and apricot. Plenty of orchards can be seen in and around the village. Varieties of apples are grown here, including the red, green and even white apples! The white apples are actually beige/yellowish in colour and taste different than what an apple normally does.

Stroll Around The Nako Lake

Take a small hike to reach the Nako Lake which is a small oval-shaped lake in the village. Surrounded by trees, and hillocks on one side, it is a picturesque spot in Nako that you mustn't miss. The reflection of the surrounding landscape on the clear water is a beautiful scene. The bird watchers will find it interesting to know that a large number of birds flock around the lake, especially around sundown. It's a serene spot for the shutterbugs to capture some stunning vistas. In winters, when the entire village gets covered in snow, the lake freezes up.

Trek Up The Nearby Hills

As the village is perched at a higher altitude, it is surrounded by slopes of numerous hills and mountains. If you are up for some adventure, gear up for a hike to the nearby hills. Do take help and guidance of the locals and keep someone informed as the village is quite close to a politically sensitive region. That apart, make sure you are well equipped and keep the weather and other challenges in mind before you venture out in search of an adventure in the mountains.

The people of Nako mainly follow Buddhism. The Nako Monastery gives interesting insights of the religion and culture. The structure dates back to the 11th century and is one of the oldest in the region. It consists of four halls, the largest is known as Dukhong, meaning ‘big hall'. The walls of Dukhong are adorned with colourful painting and scenes from the Buddhist scriptures. The monastery complex also houses a shrine of a local deity who is worshipped as the spirit of the mountains.

Stargazing In The Mountain Sky

The region is extremely clean and void of any form of pollution. On clear weather days, the night sky bordered with the peaks of mountains, appears to be a natural planetarium with thousands of stars against its inky dome. The stargazers can carry the stargazing equipment and spot the stars, constellation and even study the movements of the closest planets.

How To Reach Nako

The best way to reach Nako is via roadways. There are no airports of railhead close by, even the closest airport at Kullu is 363 km away! It is, therefore, ideal to reach district headquarters of Reckong Peo. A limited number of buses (1 or 2 a day) from here can be taken to reach Nako. Reckong Peo is about a 102 km away and given the rugged terrain, it takes approximately 4-5 hours to reach Nako.

Spring to autumn months of the year is the best time to visit Nako. The scenic beauty of village is at its peak with the spring blooms and the weather is neither too cold not too hot during this period. It is, however, advised to carry light jackets as the weather in mountains, in general, is cold. Nako experiences heavy snowfalls and most villagers migrate to lower altitudes during winters. The roads are often closed for days after the snowfall, therefore, traveling to Nako in winter is best avoided.