Nativeplanet
»
Travel guide
»The Golden City of Jaisalmer in Rajasthan

The Golden City of Jaisalmer in Rajasthan 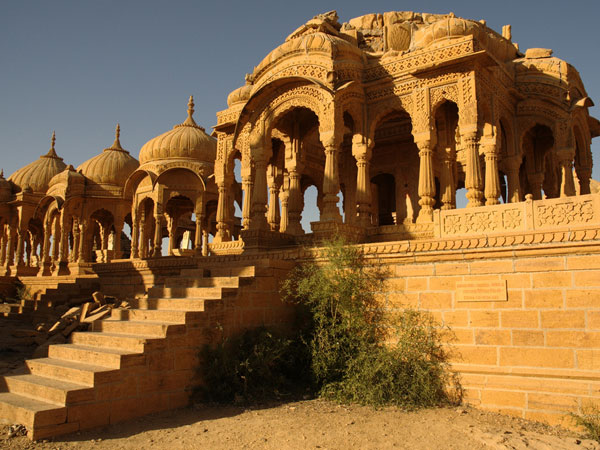 Situated in the heart of the Thar desert in Rajasthan, Jaisalmer city built on the foundation of yellow sandstone, justifies its tag as the 'Golden City' of India. The yellow stone monuments glittering in the sunlight is indeed a sight to behold. Jaisalmer offers many places to visit, ranging from yellowed forts to golden palaces and even deserted towns! The unique beauty of the place represented in the contrasting hues of gold against vivid shades of blue and green makes Jaisalmer an unforgettable experience.

Built by the Bahti Rajputs, the town of Jaisalmer showcases interesting architecture, intricately carved sculptures and strategically built forts. Here is a list of places to visit in Jaisalmer, covering the major tourist attractions in the region.

Also called the 'Golden Fort' and locally the 'Sonar Quilla' the Jaisalmer Fort is an iconic symbol of the city. Built by the Rajput ruler Rao Jaisal, this is among the largest forts in the world. Situated in the Thar desert on the Trikuta Hill, the fort has stood witness to many battles. The unique fort situated among the golden sands of Thar and built from yellow sandstone is indeed a breathtaking sight from the outside. The fortification includes three layers of walls that are as high as 30 ft. The fort once the home to royals is now inhabited by hundrends of local families. And the insides of the fort are in a sad shape when compared to the exterior, owing to the improper sanitation system and lack of maintenance. Inside the fort, travellers must explore the Gyan Bhandar library, the Raj Mahal, Laxminath temple, Jain temples, four massive gateways and merchant Havelis. The exquisitely done sculptures and motifs, classic of the Dilwar style, is breathtaking in its beauty.

Bada Bagh, which means big garden is the final resting place of the royals, the various cenotaphs stand silent testimony to the passing time. Even though they represent the end, the cenotaphs, also built from yellow sandstone are a beautiful expression of artistic workmanship. The intricate work makes the walls mesmerising during the day, and is also a great place to observe vivid sunsets.

Built in the year 1815, the Salim Singh Ki Haveli located in Jaisalmer was built on an exisiting 17th century Haveli. The Haveli used by the most influential family of the day, the Mehtas, was commissioned by the then Prime Minister Salim Singh, after whom the Haveli is named. Built in a distinct style, the Haveli sports interesting features such as the peacock inspired roof and the gateways guarded by realistic sculptures of elephants. Among other noteworthy features are the balconies of the Haveli; as many as 38 in number, they all sport distinct designs.

Away from the Jaisalmer city is a spot of tranquility that travellers must visit, the Gadisisar lake. Situated in the city outskirts, the lake was constructed in 1400 A.D. as a water source for the entire city. The area surrounding the lake has many temples and shrines, attracting devotees from across the country. The lake itself is beautiful; the sharply contrasting colours of the surrounding are reflected in the lake. It is also where you can catch a glimpse of avian life. Many migratory birds come here during the winter season.

Among the most fascinating places to visit in Jaisalmer is Kuldara, the abandoned villages. Set in the arid Thar desert, Kuldara and the nearby 82 villages were once upon a time the home to the Paliwal Brahmins. Well planned roads, homes, some of them even two-storeyed, common parking areas and other structures that stand in ruins today, force the viewer to imagine them in the past, when life still walked the streets. In 1825, the villagers of all 82 villages are said to have disappeared in the night, there is no clear conclusion on why and where they went, or even how they all managed to disappear together in a single night! Definitely a must-see place in India.

Another seemingly haunted place is Khaba in Jaislmer. Considered a popular tourist attraction along with the deserted ruins of Kuldara, the Khaba fort was once inhabited by the Paliwal Brahmins, and suddenly deserted one night. The fort stands in absolute stillness and has very few people walking about. Maintained by the government, it has many peacocks in the surrounding areas. Don't miss out on asking the locals for spooky stories associated with the fort and the village.

One of the most important Havelis in Jaisalmer is the Patwon Ki Haveli, which sports enthralling architecture. The grand structure actually consists of a cluster of five havelis, built by the rich trader Guman Chand Patwa for each of his five sons. The entire structure was built over 50 years! Besides the exquisite architecture, you can also observe wall paintings and mirror work that hints at the past glory of the Haveli. The Haveli is currently occupied by the government offices of archeological and art and craft departments.

Among the most popular location for the shutterbugs, is the Vyas Chhatri in Jaisalmer. This beautiful version of cenotaphs was built in honour of the popular Hindu sage Vyas, author of the epic Mahabharata. The structures flaunt delicate pillars and clear carvings. Head out here early in the morning to catch the sunrise and the true grandeur of the place as it lights up in the soft rays.

Located in the famed Jaisalmer Fort, the 12th century gate known as Surya gate is a popular tourist attraction in itself. The fort has four entrances or gateways; the Akhai gate, Surya gate, Ganesh gate and Hawa gate. The gates are popular for the stretch of beautiful carvings that adorn the walls and passages. It is a must visit place in Jaisalmer owing to its majestic size. A key feature of these gates is that they are constructed on a bend, the reason is said to stem from military strategy as gates were broken down by elephants, but with gates situated on a turn, the elephants lost the needed power to break through!

Located in Gandhi Chowk, the Thar Heritage museum in Jaisalmer has an exciting collection of items from the past. A great place for all history lovers to head to, the museum showcases a wide range of artifacts such as musical instruments, fossils, customs pertaining to births and deaths, etc. The guided tour provided by historian LN Khatri can indeed bring history in the museum alive.

A trip to anywhere in Rajasthan is incomplete without tasting the local cusine. Typically the area saw less meat and more vegetarian content. Try the Ker Sangri, a preparation with desert beans and owing to the increasing popularity of non-vegetarian cusine, you can also try the succlent boneless preparation of chicken called murg-e-subz.

Check out on the best hotel deals in Jaisalmer here.

A traveller in Jaisalmer will be enthralled by the street markets, selling everything from antiques to colourful clothing. However, what you need to look out for are the local Rajasthani arts and crafts. Products ranging from a wide variety of mirror and embroidery work to beautifully carved wooden boxes and Rajasthani puppets are definitely worth buying!

How to Reach Jaisalmer

By Rail: The Jaisalmer railway station has direct trains to Delhi and Jaipur. There are trains on broad gauge to other major cities in India as well. The 'Palace on Wheels' offering of IRCTC also makes a stop at Jaisalmer.

By Air: The Jaisalmer Airport is primarily used by the military and only sees a few chartered commercial flights. The nearest commercial airport is Jodhpur (278 km) and has both domestic and international flights to major destinations.