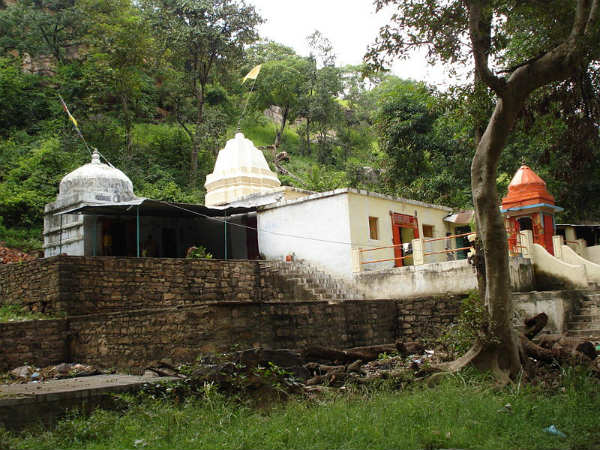 There are innumerable temples in India which seem unusual to us on account of either their surroundings and locations or their sanctum sanctorum, where the main deities are worshipped. Amongst these unusual temples, some are dedicated to humans, numerous to animals and a few to other creatures present on earth.

Taxakeshwar Temple is one such unorthodox temple in India which is neither dedicated to main lords nor their consorts. If you think you have seen enough of Hindu temples in India, then you really need to witness the beauty of Taxakeshwar Temple, which is located in the Mandsaur district of Madhya Pradesh and is dedicated to Taxak, a serpent king whose race was ousted by the Pandavas during the Mahabharata Era. Let's read more and learn in detail about this temples and legends related to its formation.

Even though the region of Taxakeshwar in Mandsaur district experiences hot summers, it is still a preferable spot throughout the year amongst local tourists on account of its lush green surroundings, which help in maintaining a pleasant weather throughout the year in and around the region of Taxakeshwar. However, if you are looking forward to avoid the summer heat and explore the temple and its region comfortably, then the best time to visit is from September until the end of April.

A Little About Its Location

Affectionately known as Taxaji, Taxakeshwar is a small region in the Mandsaur district of Madhya Pradesh and is popular amongst locals for Taxakeshwar Temple, which is believed to have been worshipped for centuries. A part of Gandhi Sagar Sanctuary, the surroundings of Taxakeshwar Temple boast of green forests and lush vegetation with the presence of a small seasonal waterfall, which helps in producing melody in the air, thereby, creating a relaxing aura.

Dedicated to Taxak, Taxakeshwar Temple is visited by hundreds of locals every months, who come here to worship the serpent king Taxak, who is believed to have been protecting the region for centuries. Taxak is worshipped along with Dhanvantari, the god of ayurveda. You can also find a small idol of Lord Shiva inside the temple.

How Taxakeshwar Temple Was Founded

Even though the exact date of the establishment of the temple is still unknown, it is said to have been founded thousands of years ago. As per Hindu mythology, when Janamejaya, a descendent of the Pandavas, avenged the death of his father, Parikshit, who was the king of Hastinapura and was killed by a bite of a snake, by killing all serpents alive on earth, the serpent king Taxak was able to defy the death on account of the boon given to him by Lord Vishnu.

Since then, Taxak remained in the jungles of Madhya Pradesh and people started worshipping him. It is still believed that Taxak lives in this temple and whoever comes with a great devotion gets all their wishes fulfilled. So, what do you think of taking the blessings of Lord Taxak?

There are lot of other places around Taxakeshwar Temple which will certainly interest you. These places include Bhanpura Museum, the rock paintings of Bhanpura, Hinglajgarh Fort, Kethuli Jain Temple, Gandhi Sagar Sanctuary, Mandsaur Fort and the famous Pashupatinath Temple, dedicated to Lord Shiva and built in the 5th century. If you desire to enjoy the natural beauty spread around Taxakeshwar, then you can explore the beauty of Chambal river banks.

By Air: If you are looking to travel by air, then you need to catch a flight to Indore Airport, which is the nearest airport from Taxakeshwar in Mandsaur. Once you have reached the airport, you can either hire a cab or take bus directly to Mandsaur. The distance between Indore Airport and Mandsaur is 200 km.

By Rail: Mandsaur is well connected to other major cities and towns by rail. Therefore, you can take a direct train to Mandsaur Junction and then from there, a cab to Gandhi Sagar Sanctuary, where Taxakeshwar Temple is located.

By Road: You can easily reach Taxakeshwar by road as the region around it has a good network of roads.