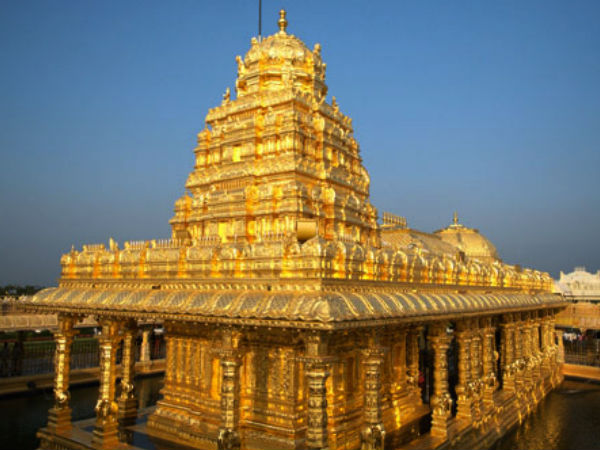 The city of Vellore is generally regarded as a transit hub for travellers. This city has a quiet past and is not considered as a major tourist hub and is thus less explored.

Those who travel through this city are smitten by its culture and traditions. There are a few places that tourists can head to in this city. It is also well known for the Ayurvedic treatments available here.

The Sripuram Golden Temple is dedicated to Goddess Mahalakshmi. The unique feature about this temple is that it is layered with gold sheets, both on the inside as well as outside. There are inscriptions from the Vedas inscribed on the walls of the temple. Devotees come here to pay respects to the goddess and worship her. It is a perfect place for those on a spiritual quest.

The Madarazaye Mohammadiya Masjid also known as the Nawab Chanda Sahib Mosque was constructed in 1750 and was the mosque of the royal family that ruled here. It has a large prayer hall facing the west and is intricately decorated. Devotees come here to offer 'Namaaz' and on festivals the mosque is decked up.

The Vellore Fort boasts of housing the Tipu Mahal, the palace of Tipu Sultan. The fort also has a temple, a mosque and a church. The fort is under the care of the Archeological Survey of India. They ensure that the fort is well maintained and kept clean.

The Jalakandeswarar Temple is dedicated to Lord Shiva and boasts of the Vijayanagar style of architecture and has two courtyards with the main shrine at the center. Devotees come here to pray to the lord and seek his blessings. Tourists visiting this place can marvel at this beautiful temple and also be amazed by its various sculptures.

How to Reach Vellore

By Air: The closest airport to Vellore is the Tirupati Airport, situated at a distance of 120 km. It is well-connected with the major cities in the country.

By Road: Vellore is well-connected with major cities in Tamil Nadu, Karnataka and Andhra Pradesh. The city has two bus terminals, namely the Town Bus Terminus and the Central Bus Terminus. Vellore lies ion NH-46 that connects Bangalore and Chennai. Vellore can be reached by NH-4 that connects Ranipet to Chennai and the Cuddalore-Chittoor highway.