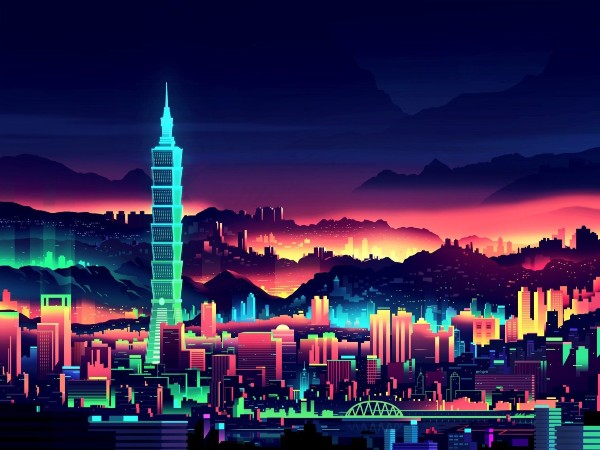 Originally a tiny townlet, Taipei grew into a significant hub for the export of tea in the 20th century consequently its economic prominence across the globe. When Japan seized and took control of the island in 1884, the city developed quickly and became the heart of Chiang-Kai Shek's regime in 1949.

Though a big economic hub now, Taipei still proudly displays an amalgamation of traditional architecture built throughout its history to modern infrastructure, from the 16th century Kauntu Temple to the modern marvel Taipei 101.

One of the most visited and renowned temples in Taipei is the Lungshan Temple, initially built in 1739-1740, although the present structure dates from 1946; the Changshu Temple has some of the finest Ching-Dynasty decorations and architecture; the Confucian Temple is contrasting, being plain except for memoranda.

However, the most celebrated is the Chihnan Temple which is not for the irresolute; it nestles at a lofty altitude with a flight of stairs believed to be around 1300 steps. Moreover, there are dozens of other religious and traditional places in the city's vicinity that are a must-see.

The most famous tourist draw is the National palace Museum, which is rich in Japanese and Chinese art compositions and is a must-visit. The Chiang Kai-Shek Memorial Hall, which was newly renamed the National Taiwan Democracy Memorial Hall, is a memorial to the one-time leader that accommodates a museum devoted to him. The surrounding parks and gardens are a favoured place for residents to practise Tai chi to break the morning. The National Concert Hall and ornate National Theatre Hall can also be seen in the same area.

The more undersized Sun Yat-sen Memorial Hall is positioned in a large park and is home to many exhibition halls and a library. The architecture is exquisite.

Taipei is also well-known for its comprehensive range of food covering dishes from all over the Far east and also for its shopping. The Chinese Handicraft Mart on Xuzhou Road, as is the Weekend Jade Market near Renai Road is a must. Global designer brands can be seen on Zhongshan North Road, while many of the local fabrics, traditional medicines and dry goods can be found in the best preserved old street in the city Tihua Street, there are dozens of local shopping zones both in the centre and in East Taipei.

This lovely city is a mixture of classic and contemporary, international and local and is a true must-see.

Any time of year