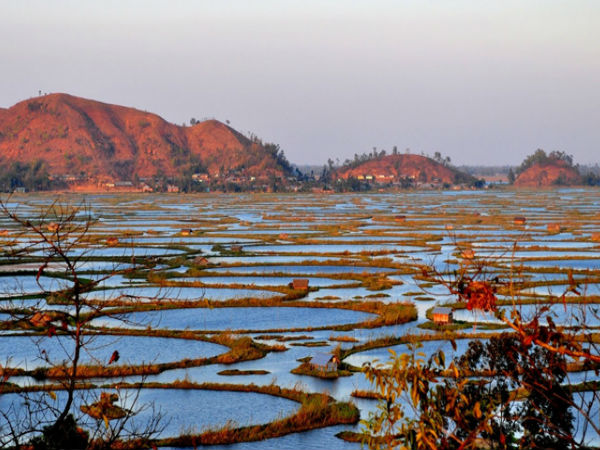 India is known for it's picturesque water bodies. It is a home to countless lakes , rivers , streams and wetlands with their own ecological importance. But have you ever seen a floating lake? Your answer would definitely be a 'NO' if you haven't been to Bishnupur district of Manipur. Bishnupur is home to the one and only floating lake in the World, the Loktak lake. Let's see some interesting features on one among the Seven Wonder Places of India - Loktak Lake in Manipur.

Being the largest fresh water lake in the North East India, Loktak lake is like an entire ecosystem in itself with a rich varied collection of flora and fauna. Spread over an area of 286 sq km, this lake has earned the laurel of being 'The Wetland of International Importance' under the Ramsar conservation.

This iconic lake of Loktak is famous for it's circular floating swamps (called phumdis in the local language). Phumdis are heterogeneous mass of vegetation, soil, and organic matters at various stages of decomposition that has been thickened into a solid form. Resembling miniature islands, these phumdis are found in various forms floating on the lake covering a substantial part of the lake area. A one of it's kind visual from the Loktak lake!

The uniqueness of Loktak lake doesn't end here. The largest single mass of phumdi in the lake covers an area of 40 square kilometre and has the world's one and only floating National park, the Keibul Lam Jao National Park. This park is the last natural refuge of the endangered Sangai or the Manipur brown-antlered deer which is indigenous to this area.

The lake seems like an ecosystem in itself. It has a rich biodiversity with around 230 species of aquatic plants, more than 100 species of birds and 425 species of animals including the rare ones such as the Indian pythons, sambhar and barking deer. Loktak is a birders paradise. The most commonly sighted birds in the region include black kite, northern hill myna, East Himalayan pied kingfisher, lesser skylark, lesser eastern jungle crow, Burmese pied myna, and more.

This ancient lake plays an important role in the economy of the state. The Loktak lake is considered as a lifeline of Manipur due to it's importance in their socio-economic and cultural life. Besides influencing the climate of the state, it also serves as a source of water for hydro-power generation, irrigation ,drinking purposes and wildlife.

The sparkling lake in the crimson evening haze will make your heart skip a beat! The tranquil ambience during the dusk make this place a Zion! The blend of rich biodiversity with delightful landscape makes it a must go place for any travel enthusiast. The unique attribute of this area is very luring. So why waiting???!

How to reach: Loktak lake is located 39 km from Imphal, the capital city of Manipur which is well connected by road and air.

Watch this space for More Wonder places in India!!