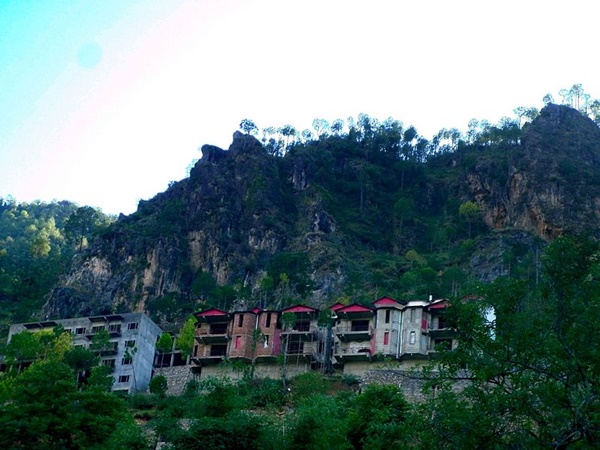 Himachal Pradesh is known for its pristine beauty, majestic Himalayas and undulating terrain laden with dense forests. Salogra is a small village along the Kalka-Shimla railway route. It is relatively a silent place compared to the nearby hill stations. A few streams flow in and around the place which will soak your feet at regular intervals and the densely forested area of high trees and unending trails covers the entire terrain. Trekking is something commonly done here for its undulating topography and snow-laden slopes are adventurous for travel enthusiasts.

Himachal welcomes tourist and adventure seekers all around the year. The best time to visit Salogra is from March to October right before the chilly winter creeps in. The mornings in summers are sunny and warm while the night a cool and pleasant with occasional showers.

Salogra is 4 km away from the district of Solan which is a major route to link all other areas of Himachal and nearby cities.

By air: The nearest airport is Chandigarh which is about 75 km from Salogra. The new fully functional airport is about to open in Shimla which will reduce the travel time considerably.

By rail: The rail route links Kalka to Shimla, most probably known as the toy train ride. The train travels along the mountainous borders giving an enthralling view of the mountains and terrain. From Kalka, regular trains run to Delhi and Chandigarh.

By road: Salogra is 35 km from Shimla and from here buses link major cities via the ISBT terminal.

Attractions In And Around Salogra

Situated at a distance of 5 km from Salogra, Krol Ka Tibba is a major tourist attraction. This beautiful mountain offers great opportunity and experience for trekkers. The trekking routes are freshly paved between mountain forests and are laden with dense fog and snowy paths in the winters which give it an English Gothic feeling. It lies in close proximity to the Salogra railway station.

Just 7 km off Salogra lies the district of Solan. It is known as the mushroom city of India for its extensive mushroom farming. Nestled at an elevation of 1467 m, Solan provides a picturesque view of the Himalayas. The entire region is flooded with dense forests and high mountains. The highest peak of the region is the Maitul and is located at an elevation of 1986 m.

To the north of Solan lies the Karol peak. Kasauli is a nearby hill station that is popular among far-flung tourists. The difficult terrain of this region has made construction a challenge which is a treatise for travellers. A nearby cave attracts pilgrims and is believed to have been the cave where the Pandavas from Mahabharata were exiled.

Barog is a part of Solan and sits at an altitude of 6000 ft. Barog is named after the engineer who constructed the tunnel alongside the Kalka-Shimla route. After his failure to make the tunnels meet, he is said to have committed suicide inside the tunnel and since then, the story of his ghost wandering in the tunnel has been famous in the folklore. To put it simply, it a great destination to visit for people interested in the chilling experience of visiting the tunnel at night!

More than a hill-station, Salogra is relatively an unknown place of tourism and that is the ultimate beauty of it. It is untouched and away from hotels and extensive transport which is a perfect refuge for wanderers and lonely souls who wish to stay away from commercial tourism.

The sleepy town has a small market, few shops selling tea and snacks and a beautifully located railway stations amidst Rhododendrons trees which looks nonetheless than a romantic movie set! The miles of the downhill journey will sure soak your feet in the wilderness and unending trails emerging from all directions lead you to small villages where people and technology are yet to reach.

Oaks, rhododendrons and a few conifers line the path and occupy most of the region which is a picture perfect frame. The lost path at times leads to you to a dense array of trees and minute huts which leaves this place in the minds of travellers for times to come.

Comments
Read more about: travel
Other articles published on May 29, 2019