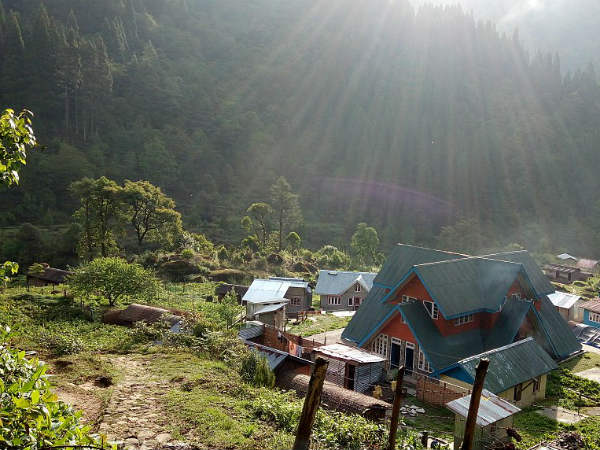 The land of fascination, mystery and romance, Sikkim is one of the most beautiful places in India. It is one place in the country that allures each and every kind of traveller. Be it regarding history, nature or wildlife, this beautiful state always tops the chart, especially when it comes to untouched beauty. Hence, it would be perfectly fine to say that Sikkim is an ultimate travel destination in India. Here, one can also get acquainted with the rich culture of unknown tribes. So, don't you think a visit to Sikkim will always be a memorable affair?

Following is the list of the 7 major reasons why every traveller must consider planning a trip to Sikkim once in a lifetime. These reasons are all set to convince you to pack your bags and book your tickets. Well, let's move ahead and learn more why Sikkim should be considered as the ultimate stoppage.

If you are unaware of this fact, then let us tell you that Sikkim has one of the largest forest covers in India and accounts for about 50% of the total land. So, when about half of Sikkim is blessed with rich and thick forests, how can it stay away from richly diverse wildlife?

Unarguably, it is home to numerous rare and endangered species of plants and animals. It is one place where you spot the lovely species of the red panda. Doesn't that interest you? Sikkim is also home to hundreds of colourful species of migratory and indigenous birds. So, if you are a wildlife lover and a photographer, Sikkim deserves to be on your bucket list.

2) The Land Of Sky-touching Mountains

It is a well-known fact that Sikkim is the land of sky-touching mountains that seem descended from heaven. After all, it is nestled wonderfully in the lap of the great Himalayas. Hence, over a period of time, it has become the foremost choice for several mountaineers.

If you are looking forward to savouring the beauty of snow-capped mountains and scaling their terrains, then Sikkim is a wonderful destination for you. Kangchenjunga, the world's third highest peak, is located in Sikkim. It is also one place where you can experiment with your astrophotography skills.

3) A Paradise For Trekkers And Campers

Well, apart from forests and snow-clad mountains, the major natural beauty which makes Sikkim a heavenly expanse and a must-visit destination for travellers is its undulating towering hills that are covered with lush vegetation. On account of these beautiful hills, it has become a perfect weekend stoppage for several trekkers and campers.

Don't you think a night spent atop a hill from where you can capture the best of panoramas and where you can savour the best of nature would be worth remembering? If yes, then the hills and mountains of Sikkim are calling you.

If Sikkim is called the home of peace, then it is certainly on account of the presence of beautiful age-old monasteries within its boundaries. These religious complexes are of great significance, and hence they have become must-visit tourist attractions in the state.

If you would love to get lost in a world filled with divinity and composure, these monasteries should be your stoppages. The list includes Rumtek Monastery, Pemayangtse Monastery, Phodong Monastery, Lachen Monastery and Ralanga Monastery. Their peaceful aura will certainly compel you to stay in Sikkim forever.

5) The Cleanest State In India

Yes, Sikkim was declared the cleanest state in India in the year 2012. Since then, it has been on the global map for travellers who love to spend their vacations in an environment which is completely free of dirt. If you do not know, then let us tell you that it is one of the few states in the country where the use of plastic bags is completely banned.

The delicious Sikkimese cuisine is another reason that makes Sikkim a must-visit destination. Rice is one of the most-consumed foods in the state. However, there are still hundreds of other dishes that can appease your taste buds. Sikkim is also one state where you can savour the authentic Nepalese cuisine. The major dishes to be relished here include dal bhat, momo, thukpa, dhindo and sha phaley.

7) Has A Rich Culture And Friendly People

Sikkim is said to be one of the oldest inhabited regions in Northeast India and has a history dating back to thousands of years. Hence, it has a rich culture and age-old traditions. Another thing that can make your trip to Sikkim an unforgettable memory is the friendly nature of its locals. Therefore, you can comfortably and conveniently explore its beauty with their help.

Comments
Read more about: india travel tourism sikkim nature weekend wildlife history temple hills mountains
Other articles published on Oct 24, 2018
We use cookies to ensure that we give you the best experience on our website. This includes cookies from third party social media websites and ad networks. Such third party cookies may track your use on Nativeplanet sites for better rendering. Our partners use cookies to ensure we show you advertising that is relevant to you. If you continue without changing your settings, we'll assume that you are happy to receive all cookies on Nativeplanet website. However, you can change your cookie settings at any time. Learn more
Change Settings Continue