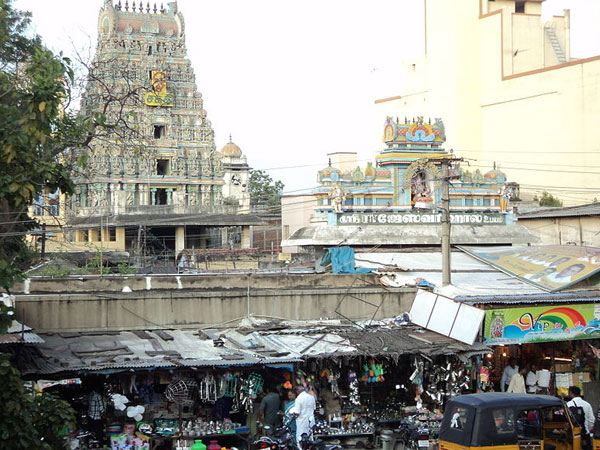 A prominent textile centre in Tamil Nadu, Salem city has much to offer travellers visiting this part of the country. Surrounded by hills the city has a dry climate, but what it lacks in pleasant weather conditions, it makes up for in the variety of scenic attractions that dot the city. Salem also provides a gateway to many other popular tourist destinations in the region such as Yercaud and Kolli Hills.

Like any other destination in Tamil Nadu, Salem too has its share of beautiful temples. Other attractions like forts and dams can fill a weekend holiday rather pleasantly. Here are the top places to visit in Salem.

Salem has many popular temples. One of the most prominent is the Kottai Mariamman Temple. Located centrally on the banks of the Tirumanimuthur river, it is also one of the oldest temples in the region. A noteworthy feature is the week-long temple car festival that takes place during the months of July-August.

Dedicated to the worship of the Hindu God Murugan, the Kandhaswamy temple is among the most famous and richest temples of Salem. Devotees suffering various ailments come here to seek blessings for good health and prosperity. An interesting prasad given is the 'karum sambal' which is said to be derived from snake poison and is believed to cure the devotees.

An interesting place to visit in Salem is the Lingam temple that houses 1008 Shiva Lingams. The place is not crowded, and the surrounding greenery makes it tranquil and serene.

The historic fort of Attur in Salem is another interesting place to visit. It is said to be over 300 years old and built during the reign of the Madurai Nayaks. The fort changed hands numerous times and was last used by the British in 185. Today it is maintained by the Archaeological Survey of India.

At a distance of around 50 km from Salem city is a famous sightseeing place, the Mettur Dam. The large dam is said to be the oldest in India and is constructed over the river Cauvery. Originally built for irrigational purposes, the surrounding hills and scenic waters have made the dam a popular place to visit near Salem.

Situated at a short distance from Salem city is another tourist attraction, the Panamarathupatti lake. Spanning an area of over 500 acres the beautiful natural lake supports irrigational activities and drinking water requirements of certain parts. Many birds visit the lake making it irresistible to travellers.

The regions in and around Salem city offer many more attractions for the exploring travellers such as the popular Yercaud hill station and Kolli Hills. Lesser known places such as Aanai Maduvu Dam, Pachaimalai Hills, Myluthu Falls, Kalrayan hills, etc. also dot the vicinity of Salem city.

How to Reach Salem

By Road: The city is well-connected by a network of state and national highways to most major cities of the country. Plenty of state and private buses are available to the city from major cities in the south. Taxis and cabs can also be availed to travel to Salem.

By Rail: The Salem Junction is a major railhead connecting the city to all major cities in the country.

By Air: Salem has an airport 20 km from the city. However, it has limited flights. The nearest major airport is in Trichy (135 km) and Coimbatore (159 km).

Comments
Read more about: salem tamil nadu temples nature
Other articles published on Aug 8, 2014
We use cookies to ensure that we give you the best experience on our website. This includes cookies from third party social media websites and ad networks. Such third party cookies may track your use on Nativeplanet sites for better rendering. Our partners use cookies to ensure we show you advertising that is relevant to you. If you continue without changing your settings, we'll assume that you are happy to receive all cookies on Nativeplanet website. However, you can change your cookie settings at any time. Learn more
Change Settings Continue