Tamil Nadu – An Enchanting Travel To The Ethnic Land! 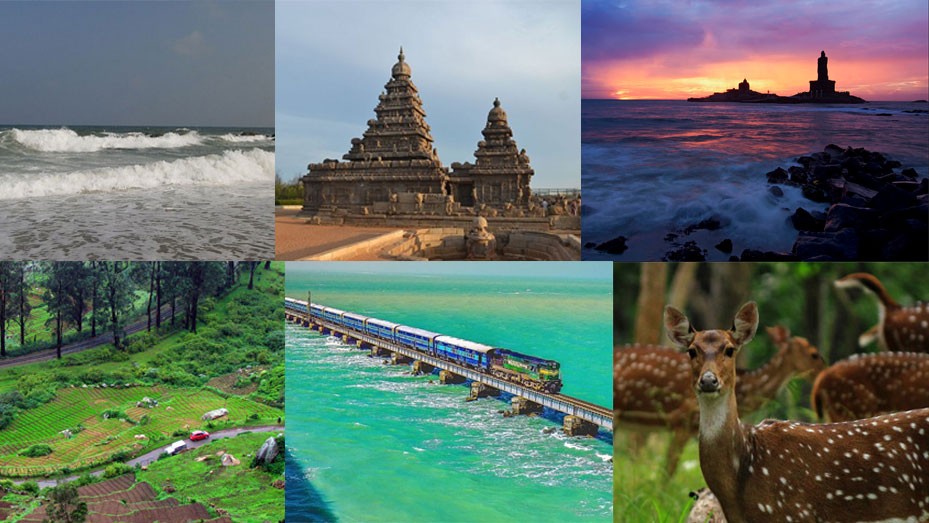 Tamil Nadu tourism is endearingly distinctive in its own way, with tones of culture, ethnicity, naturalness and beauty. It has itself opening up to the fancy and passion of any kind of a traveller, an explorer with a keen eye for all aspects of travel or a traveller with a relaxed outlook. Tamil Nadu stands out in its ethnicity that is so unique that it is often a desired destination for tourism.

Tourists throng to the hill stations of Tamil Nadu, Ooty and Kodaikanal being its crowning glories. The hill stations in the Nilgiris–Ooty, Coonoor, Kotagiri, etc.–are a fathomless fancy for travellers, invitingly beckoning with their natural beauty and salubrious climate. Yercaud in the Salem district of Tamil Nadu is yet another popular hill station, while untravelled ones like Yelagiri, Kolli Hills and Valparai which are slowly becoming apparent to travellers.

Coastal tourist places of Tamil Nadu are never-ending expanses of aqua with unfailing aspects that make for a thorough beach holiday. Mahabalipuram emerges in front of the mind's eye for a beach holiday. The Marina Beach and the Besant Nagar Beach in Chennai are travel treats for those paying a visit to the capital of Tamil Nadu. The Covelong Beach is an extension of these waters of Mahabalipuram and Chennai, which is beautiful on its own.

The Nagapattinam district include some important coastal places of Tamil Nadu tourism like Nagore, Velankanni, Sikkal, Kodiyakkarai, Vedaranyam, Mannargudi and Tranquebar. Nagore is a quaint little town along the shore of the Bay of Bengal on the border of the Tamil Nadu and Pondicherry.

Poompuhar, apart from being a coastal place, also holds historical significance and finds place in Silapathikaram, the popular Tamil epic.

Kanyakumari is the southernmost tip of India at the confluence of the Bay of Bengal, the Arabian Sea and the Indian Ocean. Its geographical positioning with its impelling tourist attractions make it a sought-after destination of Tamil Nadu tourism. Thiruchendur and Rameswaram are prominent religious points on seashores.

Some tourist places in Tamil Nadu are known and visited for their strong flavour of culture and heritage, from within and abroad.

The Chettinad region is of prime importance in this respect with Karaikudi as its crowning glory. The cuisine, the weaves, the numerous temples and mansions turned resorts stand as significant sources of Tamil culture. Coimbatore with its Kongu culture, the temple city of Madurai and Thanjavur also are also cultural embodiments and even in modern times are culture clad.

The temples of the state are integral impressions of Tamil Nadu tourism. The towers called gopurams are often towering with intricate workmanship in sculpting, with designs and patterns in layers. Tourists flock Thanjavur and Kumbakonam, for their air of piety and colossal architectural wonders built by the erstwhile rulers of the past. Darasuram, Mayiladuthurai, Thiruvarur, Thirumanancheri, Thirukarukavur, etc. are some important temples worth visiting.

The Madurai Meenakshi Temple built by the Pandya rulers is a magnificent example of the temple architecture of Tamil Nadu and a sculptural wonder, with numerous portions of the temple which bespeak the splendid architecture. The temple of Rameswaram, on a calm seashore where waves are almost still, is one of the 12 Jyotirlingas of Lord Shiva.

Panchabootha Temples (Five Elements) – These are temples dedicated to Lord Shiva considering him as the source and manifestation of the five elements. Thiruvanaikaval, Thiruvannamalai, Kanchipuram and Chidambaram are located in Tamil Nadu while, Kalahasti is in Andhra Pradesh.

6 Battle-camps Of Lord Subramanya Or Muruga – Claimed as the Tamil God known for his valour and wisdom, there are six temples dedicated to Lord Muruga, thronged by devotees with religious fervour. Palani, Thiruparankundram, Thiruchendur, Palamudircholai, Thiruthani and Swamimalai are the five jewels among temples each with a significance of its own.

Chennai, Coimbatore, Madurai, Trichy, Salem, Erode, Vellore, Tirupur, Thirunelveli and Thoothukudi are the cities of the state and form bases for travel in the state.