6 Places To Visit In The Mesmerising City Of Srinagar 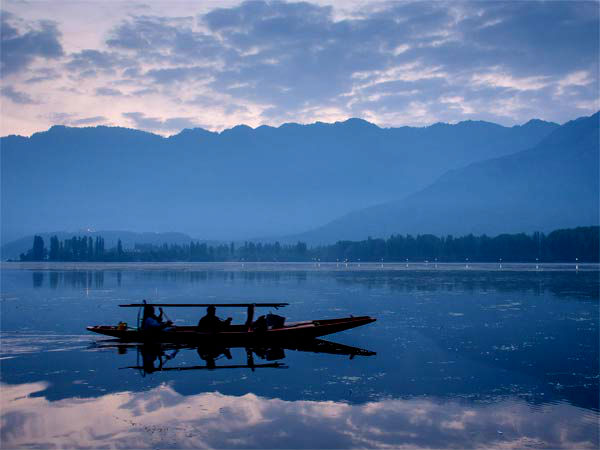 Jammu and Kashmir is the most picturesque state of India, that in spite of the conflicts, stands ever so beautiful and pristine. It is one of the most sought-after tourist destinations, that offers different landscapes for different purposes. Ladakh for adventures, Pahalgam and Gulmarg for a honeymoon and so on.

Similarly, the summer capital of this beautiful state, Srinagar, is a wonderful city that has much to offer. Immaculate beauty of snow-capped mountains surrounds the city while the breathtaking and popular Dal Lake steals the limelight. We all might be familiar with Dal Lake, but here are the few other places in Srinagar that you mustn't miss on a visit to this wonderful city.

Also known as Srinagar's Jewel, Dal Lake is mesmerising and the most popular tourist spot in Srinagar. It is an important resource for fishing and has a floating market where flowers and vegetables are sold.

Shikaras are beautiful wooden boats, found on the lake, that are used in a few other places of Jammu and Kashmir and is like a symbol of the state. You can cruise through the lake in luxurious houseboats while witnessing beautiful Mughal gardens that line the shore of the lake.

Don't miss out on Char Chinar, a beautiful island that is located in the middle of Dal Lake. It is advised to avoid visiting during winter since the lake will be frozen.

Being the biggest mosque in Kashmir Valley, Jamia Masjid is an ancient mosque that is located in the Old City of Srinagar. It is a beautiful mosque that dates back to 1394 AD, which is built in an Indo-Saracenic style of architecture.

The mosque has four minarets with spiral staircases and the top of these minarets offer breathtaking and panoramic views of the entire city of Kashmir. It was renovated by several sultans over a period of time and is big enough to hold over 30,000 devotees at once.

The popular gardens of Srinagar reflect a fine blend of landscaping, natural beauty and architecture by the Mughal Empire. With designs inspired by the gardens laid in Persia, several Mughal emperors laid out magnificent looking gardens that are famous places of attraction till date.

Shalimar Bagh, the most famous one of all, is located right beside the Dal Lake. It is a three-tiered garden that was laid out by Mughal Emperor Jahangir for his beloved wife. The other gardens you cannot miss include Nishat Bagh and Chashme Shahi Garden.

Pari Mahal, which literally means "Angel's Abode", is a structure that was built in the mid 1600s by Dara Shikoh, a Mughal emperor. It is placed in a seven-tiered garden on the pinnacle of the the Zabarwan mountain ranges, thus, overlooking the entire city of Srinagar.

The Mahal was used as an observatory, library and abode of emperor Dara Shikoh. Now the garden is one of the popular attractions that is operated by the Srinagar Government.

Laid out in 2007, Indira Gandhi Memorial Tulip Garden is currently the biggest tulip garden in all of Asia. It is spread across an area of 12 hectares and consists of over a million vibrant and multicoloured flowers.

It is flanked by a golf course on the north, Dal Lake on the west and is nestled on the Zabarwan hills. The best time to visit this garden is between the end of March and early April, since you can witness mesmerising flowers completely bloomed only for 15-30 days during this period.

Hazratbal is a shrine that is located on the left bank of the beautiful Dal Lake. It faces Nishat Bagh as well, so a stunning view of the lake, the garden and mountains in the backdrop can be witnessed at this shrine. It is a sacred shrine that is believed by many to house a strand of the hair of Prophet Muhammad.

Constructed using pristine white marble, the shrine is a serene place that is considered to be one of the holiest places of Kashmir.