Places In India To Spot Tigers In The Wild 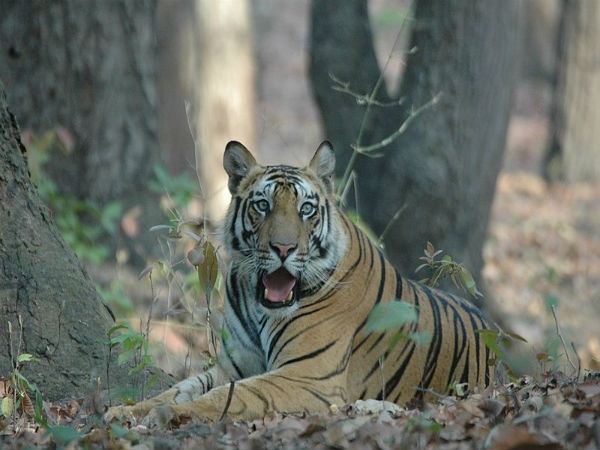 Home to 70 per cent of the world's tiger population, India has a vast assemblage of history with these wild animals. At once these wild striped beasts were on the verge of extinction but thanks to repeated government interventions, their population is now stable. The recent tiger census shows that about 2,200 tigers are spread across India and the population is increasing steadily.

India has an array of tiger reserves and national parks. The habitat is not confined to one place and there is a great diversity in their population distribution. It would be indeed an enthralling experience to see these beasts wander in the wild on their own making a traveller get closer to nature and to wildlife.

Reputed to be the largest national park in central India, The Kanha National Park in Madhya Pradesh is spread across 2060 sq km. Endowed with beautiful sal woodlands, these forests offer a good chance of tiger sightings in groups. The park was also honoured as the most tourism friendly national park of India for its welcoming attitude towards visitors.

The park is divided into Kisli, Kanha, Sarhi and the Mukki zone which remain open from October to June. Apart from the Royal Tiger, Kanha is also blessed with a huge population of Barasingha which is unique to this habitat.

How to reach: The nearest railway station is Jabalpur which is linked to major cities of India.

Madhya Pradesh's Pench National Park is the infamous park which formed the storyline of Rudyard Kipling's The Jungle Book. Its history traces back to the reign of Akhbar and is found in the Ain-i-Akbari book. The forests in Pench are dominated by teak rather than sal, which gives it a different floral diversity than other parks of Madhya Pradesh. The park stretches across an area of 757 sq km and remains open from October till June.

How to reach: Nagpur is the nearest airport and Chindwara is the local railhead.

The largest delta in the world stretching all along coastal West Bengal to Bangladesh, Sunderbans is infamous for its Royal Bengal tigers which are one of its kind in the world. Although travelling in a deltaic region is tough yet it is worth the journey. Tigers are easily seen in their local habitats at the deltaic mouth along with a wide range of wild fauna hidden amidst the dense mangrove vegetation. Cruise and boat rides are the only mode of transport through the delta.

How to reach: The nearest railway station is Namkhana which links the Kolkata railway line.

The oldest national park in the country and perhaps the most luxurious one, Jim Corbett National Park lies nestled in amidst the Nainital Hills offering a splendid view of the area. The park hosts the highest number of tigers in the wild and offers a great range of activities and leisure for travellers.

However, its facilities are not to be mistaken for the thrills and haunt it bids for visitors. The Dhikala range is popular for its tiger sightings and forest lodges. Jungle tours, safaris and cottages are readily available waiting to add on to your adventure.

How to reach: The nearest town of Ramnagar is well connected by rail and road to nearby cities.

Bandhavgarh has been perhaps the most documented national park of India in wildlife journalism. It hosts the highest density of tigers in the wild and therefore, promises the best chances of spotting the stripped beast in its wild habitat. The park is has been divided into the Magadhi, Tala and Khitauli zones and remains open from October till June. The park offers tree house hideouts for visitors nestled in the deep and dense jungles.

How to reach: The nearest railway station is Umaria and the nearest airport is Jabalpur.

The Manas National Park shares its territory with Bhutan and is arguably a landmark site recognized for its tiresome efforts in Tiger conservation. Manas has lush green vegetation and enormous tree cover which makes sightings of tigers challenging. Elephant safaris into the wild spotting various wild animals like bison and rhinoceros are common here.

How to reach: The nearest railway head and airport is Guwahati which is linked to major cities in the country.

Comments
Read more about: india
Other articles published on May 29, 2019
We use cookies to ensure that we give you the best experience on our website. This includes cookies from third party social media websites and ad networks. Such third party cookies may track your use on Nativeplanet sites for better rendering. Our partners use cookies to ensure we show you advertising that is relevant to you. If you continue without changing your settings, we'll assume that you are happy to receive all cookies on Nativeplanet website. However, you can change your cookie settings at any time. Learn more
Change Settings Continue