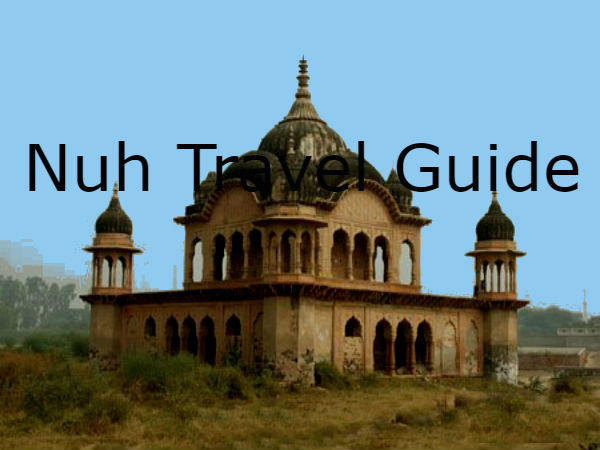 The historic town of Nuh is located at a distance of 47 km from Gurgaon in the Mewat district. Due to its close proximity to Delhi and Gurugram, Nuh is easily accessible and a great destination for history buffs. The history of the place goes back to the Gurjarapratihara rule.

The city got its prominence during the rule of Bahadur Singh in the 18th century. The excavations in the area have shown association with Raja Mihir Bhoja, one of the powerful kings of the Gurjara Pratihara dynasty. Several coins that belong to the Indo-Sassanian type have been found in the areas near Nuh, which was issued by Mihir Bhoja.

The tomb of Sheikh Musa which is also known as Shaking Minarets and the Temple of Hathor are some of the architectural marvels of Nuh. These minarets are one of its kind. It is said that if anyone shakes one of the minars then the vibrations are felt at the other minar. These remnants are architectural wonders that showcase the skills of the architects who designed the structure.

The summers are usually extremely hot in Nuh while winter is pleasant during the day and cold at night. The temperature can range from 2°C to 25°C. Therefore, the best time to visit the historical town of Nuh is from October to March. Monsoon is from July to September which is also a good season to visit for those who love rains. The weather is pleasant and Nuh is fresh and beautiful in the monsoon.

How To Reach Nuh

By air: Indira Gandhi International Airport in Delhi is the nearest airport. It is 51 km from Nuh and is well connected to major domestic and international cities. From the airport, you can travel to Nuh by hiring a taxi.

By train: The nearest railway stations are Gurgaon (50 km) and Palwal (32 km).

By road: Nuh is about 45 km from Gurgaon and is on the Delhi-Alwar Highway. The town is well-connected to Delhi, Uttar Pradesh, Rajasthan and Gurgaon. There are frequent bus services to Nuh from these places.

Places Of Attraction In Nuh

Located about 7 km from Nuh is the Kotla village that is famous for several ancient relics. As per a legend, Pandavas stopped at Kotla for a short period during their exile. The Kotla Mosque is made of grey quartzite and red sandstone. It has inscriptions on the gateway. The mosque is on a raised platform and the structure is in square shape. It is about 6.5 km from Nuh.

Located at the base of the Aravali ranges, Nalhar temple is dedicated to Lord Shiva. It is about 2 km from Nuh city. The temple is surrounded by picturesque mountain peaks. The temple compound has two shivlings. There is a natural reservoir which can be accessed by stairs that are behind the temple. There is a legend that Pandavas stayed at this place during their exile. You get best views of the surroundings from Nalhar hill.

This building was constructed at an imposing scale around 1872. The grand repository architectural styles are incorporated in the structure which is quite fascinating. Today, it is a protected monument and is under the State Archaeology Department.

The tomb is a magnificent architectural marvel in Nuh. It was known as Hazrat Sheikh Musa Dargah and is located in the picturesque location at the base of the Aravalli mountain ranges. According to the legend, Sheikh Musa arrived at this place in search of serenity and peace. This complex was constructed for him and later on extended as he gained fame.

Chuhimal Talab, as well as the Chattri Complex, is a privately-owned property that consists of historic temples, arcaded entrance block and a stepped style waterbody which has small octagonal platforms. The complex has a double-storeyed chattri made of sandstone.

This attractive storey has floral inscriptions and was built in the memory of Chuhimal. The pond is well-maintained and is in a good state. The source of water is from the nearby canal that gives us an idea about the ancient water systems that prevailed in the town.

Comments
Read more about: travel
Other articles published on Jun 3, 2019
We use cookies to ensure that we give you the best experience on our website. This includes cookies from third party social media websites and ad networks. Such third party cookies may track your use on Nativeplanet sites for better rendering. Our partners use cookies to ensure we show you advertising that is relevant to you. If you continue without changing your settings, we'll assume that you are happy to receive all cookies on Nativeplanet website. However, you can change your cookie settings at any time. Learn more
Change Settings Continue