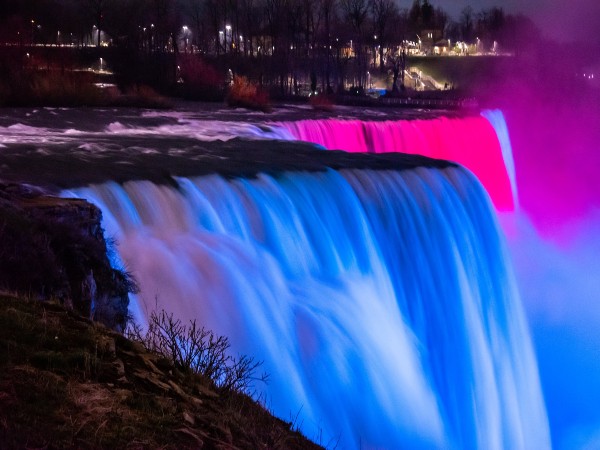 The twin cataracts of the American and Horseshoe Falls that makeup Niagara Falls provide one of the most astounding natural spectacles on earth. Stunning all year round, they have a special aura in winter, when the surrounding hillsides are covered with snow and the spray from the torrent of water freezes in the air.

The outstanding natural beauty of the Falls is augmented by illuminations and pyrotechnic displays during the annual winter Festival of lights. Things get underway in early November at Queen Victoria Park, with a huge firework display and the turning on of the illuminations, which comprise over three million twinkling lights.

With one eye on marketing and pleasing the kids, many of the illuminations are themed often recreating scenes from popular children's animation films. More grown-up fun can be had in the form of the many classical music concerts put on during the festival. For those who can't wait for Christmas, there is a Santa Claus parade at the end of November and, if you want to lose a few calories in the lead-up to Yuletide, there is a 5-km (3-mi) fun run which is open to all.

December sees more concerts and a few days before the big day. Christmas Day and Boxing Day in Canada are all about being with the family, and the festival takes a well-earned break before laying on an unforgettable New Year's Eve celebration, where fireworks once again light up the skies above the iconic waterfalls.