Must-visit Temples In Tumkur: Savour The Beauty Of Devotion And Divinity 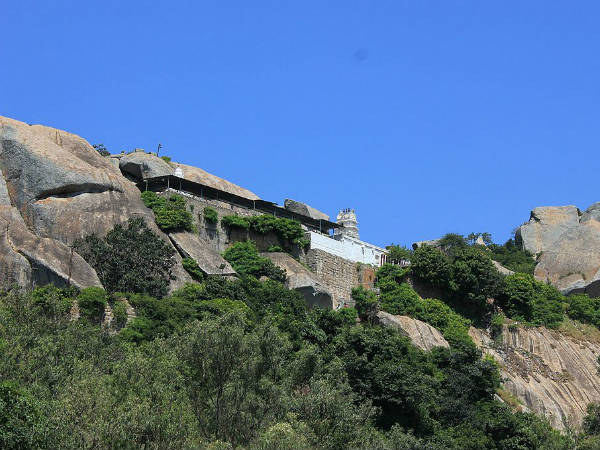 Tumkur is one of the oldest places in Karnataka as it's history dates back to the era of the Ganga dynasty during the early Medieval Period of India. Hence, it is home to several ancient monuments and religious sites today. Even though Tumkur is an industrial city, it is popular amongst tourists as a historical place. So, how about exploring its ancient temples this weekend? Apart from learning about their history and architecture, you can also savour their pristine and peaceful aura. Following are the major temples in Tumkur which you must explore if you are looking forward to gaining an everlasting experience. Read on to know more about them.

One of the oldest-known shrines of Lord Hanuman in Karnataka, Kote Anjaneya Temple is believed to have been in existence since the last 500 years. However, the current building of the temple was built a few years ago. The idol kept inside the temple is said to have been placed by Sri Vyasaraja, who was one of the prominent priests in the Vijayanagara Kingdom and is popular for consecrating such 732 idols all across the country.

Located in a small hamlet named Seeba at a distance of about 25 km from the centre of Tumkur, Narasimha Swamy Temple is said to have been constructed during the late 18th century; however, the accurate date of its formation is still unknown. Dedicated to Lord Narasimha, an incarnation of Lord Vishnu, this ancient temple is also noted for its commendable architecture, which consists of large halls, murals, beautiful courtyards and carved ceilings.

As per local legends, the temple was built by a merchant who dreamt of Lord Vishnu instructing him to build a shrine. However, there are several other stories which are related to the formation of the temple.

As per another legend, the temple was constructed by the sons of a wealthy man who was a minister in the court of Mysore King Tipu Sultan. How about getting yourself to this temple and learning about the history of the temple in detail?

A popular weekend getaway in Karnataka, Devarayanadurga is a beautiful hill station amidst dense forests and rocky hills and is home to a few small temples. The most significant amongst them are Yoganarasimha Temple and Bhoga Narasimha Temple. Located at an elevation of about 4000 feet, these temples are perfect stoppages to relax on your weekends.

Sitting inside the beautiful compound of the temple and enjoying its positive ambience as you feel a cold breeze on your face is certainly an everlasting experience. Wouldn't you love to gain such an amazing atmosphere? Due to the presence of hills, it is also a weekend destination for trekkers.

A famous pilgrimage centre amongst Hindus, Shivagange is a beautiful peak with an altitude of about 2600 feet and is located at a distance of about 20 km from the main town of Tumkur. As per historical records, it is said to have been in existence since the era of the Hoysalas.

However, it was captured by several other rulers later on. It is home to a few cave temples, such as Sri Honnamma Devi Temple and Sri Gavi Gangadhareshwara Temple. Today, Shivagange is also a popular rock climbing and trekking destination.

Comments
Read more about: india travel tourism temples tumkur karnataka hills valleys
Other articles published on Jul 10, 2018
We use cookies to ensure that we give you the best experience on our website. This includes cookies from third party social media websites and ad networks. Such third party cookies may track your use on Nativeplanet sites for better rendering. Our partners use cookies to ensure we show you advertising that is relevant to you. If you continue without changing your settings, we'll assume that you are happy to receive all cookies on Nativeplanet website. However, you can change your cookie settings at any time. Learn more
Change Settings Continue