Nativeplanet
»
Travel guide
»Museums In Hyderabad: Scrutinise The Beauty Of The Bygone Era

Museums In Hyderabad: Scrutinise The Beauty Of The Bygone Era 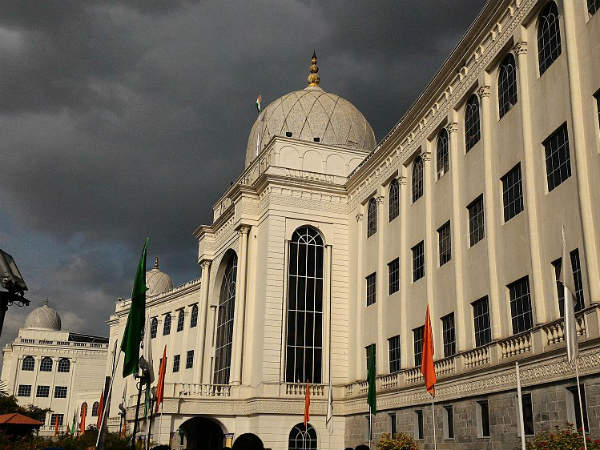 What comes to your mind when you think of Hyderabad? Biryani, Charminar or Nizams? Well, there is much more to this beautiful city which certainly makes it a complete package for every traveller. Hyderabad is popular all over the world and there is no second thought about it. Apart from its mouth-watering biryani and the ancient marvel of Charminar, Hyderabad houses hundreds of tourists spots, ranging from historical monuments to lakes and gardens to museums. How about exploring its museums this weekend? Let us tell you that these museums will certainly take you back in time and teach you in detail about the history of Hyderabad and the entire India.

From the birth of science to the human evolution and the history of culture to the past of Indian kings, a lot can be studied and pondered over in these museums. If you love exploring the beauty and the glory of history, then you must catch a glimpse of these alluring beauties. Read on to know more about museums in Hyderabad and their splendours.

How about witnessing Aurangzeb's sword, the crafted daggers of Jahangir and the wardrobe of Tipu Sultan? Yes, you can find such artefacts at Salar Jung Museum. Established in the early 20th century, it is one of the famous museums in India and holds the largest one-man collection of artefacts in the world.

From the Quran collections to thousands of ancient texts, beautiful carvings to centuries-old sculptures and legendary paintings to gold and diamond ornaments, there is a lot to witness within the boundaries of Salar Jung Museum. With around 40 galleries, it is one of the largest museums in the world and houses more than one million objects.

Isn't it a wonderful place? If you are a history lover and would love to turn back the pages of history, then there cannot be a better place for you other than this mesmerising museum. Every year, it is frequented by tourists in millions.

Also known as Hyderabad Museum, Telangana State Archaeology Museum is the oldest museum in the city. It was established in the year 1930 after hundreds of artefacts were found during an excavation which was carried out on the orders of a Nizam of Hyderabad.

If you are looking for a place where you can capture the details of the Nizams and the Kakatiya rulers, then this decades-old museum is a perfect place for you. You can also find several sections dedicated to the life of Lord Buddha. From Egyptian mummies to beautiful statues and bronze idols to Buddhist stupas, there is a lot to explore here. Hence, it is visited by thousands of local tourists and history lovers every year.

Would you like to know what gifts the last Nizam of Hyderabad received on his silver jubilee celebrations? If yes, then Nizam Museum is your calling. Formed in the year 2000, Nizam Museum is located inside Purani Haveli, the official residence of the Nizams, and houses more than 1000 objects.

A gold tiffin box, diamond-studded daggers, glass paintings, jewel boxes, silver cups and perfume containers are a few things which grab most of the attention of the visitors. It also houses a remarkable collection of vintage cars. Wouldn't you love to see them? A centuries-old lift, the wardrobe of the sixth Nizam and beautiful proclamation drums are certain other things on display. Can you really get such an amazing collection elsewhere in Telangana?

Another museum located at Purani Haveli, City Museum was formed in the year 2012 and was inaugurated by the grandson of the last Nizam. Even though there are not many objects to witness here, it is still a popular hotspot amongst history lovers.

The major things which can be found here on display include terracotta figures, old coins, millennium-old pots and megalithic sites. You can also find several other objects related to the early Medieval Period of India. The major reason why you must catch a glimpse of City Museum lies in its unique collection of prehistoric objects which you cannot find in other museums of Hyderabad.

How about seeing a 160-million-year-old dinosaur? If you would love to explore some fossils related to the dinosaur age, then Birla Science Museum in Hyderabad is the place you should visit. Established in 1985, it is a science centre and is visited by people of all age groups. The art gallery and the planetarium present inside the compound attract a lot of children.

Comments
Read more about: india travel tourism museums hyderabad weekend
Other articles published on Jul 19, 2018
We use cookies to ensure that we give you the best experience on our website. This includes cookies from third party social media websites and ad networks. Such third party cookies may track your use on Nativeplanet sites for better rendering. Our partners use cookies to ensure we show you advertising that is relevant to you. If you continue without changing your settings, we'll assume that you are happy to receive all cookies on Nativeplanet website. However, you can change your cookie settings at any time. Learn more
Change Settings Continue