Mount Etna: Battlefield Of The Giants 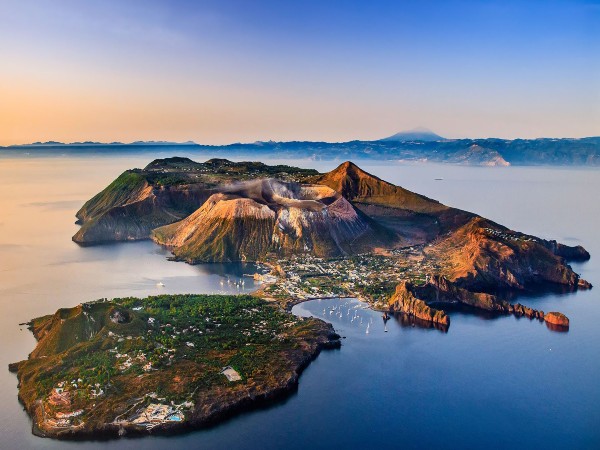 On the east coast of Sicily lie three massive rocks, lapped by waves. Known as the Scogli Dei Ciclopi, they are of volcanic origin and quite unlike other rocks along the shore. These identical boulders, it is said, were hurled by a monster at the ship of Odysseus (or Ulysses), the leader in the Trojan Wars of Greek mythology.

Homer, the 8th century BC Greek poet, tells in his Odyssey how the hero and his companions were imprisoned in Sicily by the Cyclops, a race of man-eating giants. Their leader was Polyphemus, whose attractions were further lessened because he had only a single eye, set in the middle of his forehead. While Polyphemus slept, Odysseus and his men drove a sharpened olive beam, hardened in fire and still burning into the giant's eye, then fled for their lives - and their ship. Blinded and in agony, though he was, the Cyclops was yet able to tear rocks out of the mountainside and fling them after his tormentors. He missed, but the rocks lie where they landed, a memento still of the monster's strength.

As for the truth of the tale, if you look a dozen miles (20km) or so inland from the rocks, etched high against the powder-blue Sicilian sky you will see the summit of the volcano, Mount Etna. Is single crater, blind and hollowed, is like the giant's eye.

Not once but several times through the centuries, Etna has proved its ability to hurl boulders at least as large as the Scogli Dei Ciclopi over an even greater distance, and it continues to give spectacular evidence of its wrath down to our times.

Massive eruptions were reported in 475 and 396 BC, again in either AD 812 or 1169, and in the 14th century. In 1669 Etna was lit from top to bottom, pouring out millions of tons of lava to devastate the city at its foot, Catania, and the surrounding countryside. Lesser eruptions before and since including more than a dozen in the 20th century - have regularly destroyed farmland and buried villages.

Although reports of Etna's activities go back to the mythical time, it is fairly young as volcanoes go. It emerged from the sea about a million years ago and first erupted some half a million years later. Now it is Europe's largest active volcano, measuring roughly 100 miles (160km) around its base and covering an area almost the size of Greater London.

As with many volcanoes, Etna's height varies; at present, the summit is about 10,991ft (3350m) high, but less than less decades ago it was almost 100ft (30m) shorter. The summit is also something of a movable feast, since repeated eruptions cause the tops of volcanoes to cave in, leaving saucer-shaped depressions, or calderas, while new summits build close by. There were at least two Etna summits before the present one, and on the volcano's side there is a caldera of quite staggering proportions - a great hole 12 miles (20km) round, with sides dropping sheer for 3000ft (900m).

All the business of growth and renewal imparts an uneasy impression of being in the presence of a huge if primitive, living creature. This is made all the more vivid by breathy exhalations of gases and vapours from fumaroles (steam vents) and mini craters. Etna, like other active volcanoes, might be more accurately likened to a leaky valve covering a weak spot in the Earth's crust.

Its eruptions are thought to emerge from a lava reservoir some 18 miles (30km) long by 2 1/2 miles (4km) deep, located below the mountain and fed by gargantuan quantities of gas-chares molten matter welling up from beneath the crust. Titanic pressures mount, seeking existence on the sides and top of the volcano, finally emerge on the surface as fountains of fire, clouds of sulphurous gas and torrents of lava, pouring down the mountainside.

The View From The Top

To ascend Etna on foot - not difficult as the slopes are gentle - is to have the natural history of the area unfurled before you. Vines, orange and pistachios cloak the lower slopes, giving way gradually to apples and cherries. Above are wooded slopes of oak, sweet chestnut, hazel and birch, and higher still is the tumbled, weathered lava where little grows but alpines and occasional hummocks of Sicilian milk-vetch plant.

Here also there are pockets of permanent snow. In the old days, this was shovelled over the layers of cold ash and exported in summer to Naples and Rome to be used in ice-cream manufacturers - the local aristocracy regarded it as a crop more important than wine.

But towards the summer is an area totally inimical to life, a grey, shapeless waste of slag, ash and lava, punctured by steaming fissures - an echo of the world's first beginnings. The crater's gaping maw is stained with oxides and sulphates, and in-depth varies constantly with the heaving of the lava plug.

The time to see it all is just before dawn when the crater pulsates with the red glow that has been a marker for sailors since ships first sailed the Mediterranean. Then, as the sun comes up, all of Sicily and Calabria are laid out below, with Etna's shadow pulling in towards you and, far off, a glimpse of Malta. These are lands that witnessed the beginnings of European civilisation; a comforting thought when primeval chaos lies below one's feet.