Most Colourful Places In India To Spot The Scintillating Sky 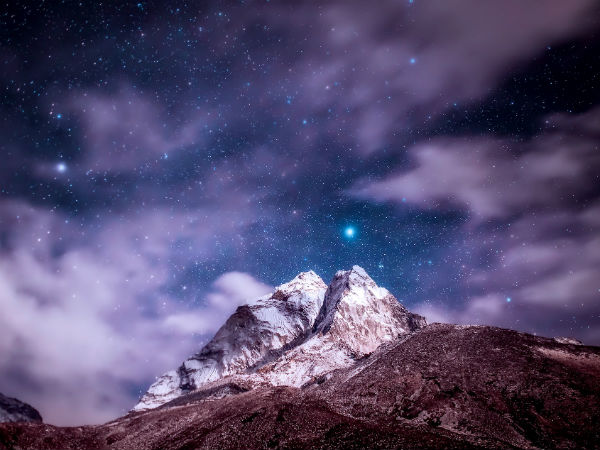 The world has always been beyond everyone's comprehension and it never ceases to surprise us with its magical surroundings and unimaginable destinations. So, how about witnessing these natural beauties, which certainly leave everyone awestruck and wondering about the formation of this entire universe? If you are keen on exploring the best of this colourful world, then following are a few places you should head towards to encounter a flawless mix of nature and colours.

From spotting twinkling stars to capturing the beauty of the sky painted in charming colours and from gazing at the wonders of space to witnessing colourful beams reflecting over waterbodies, there is a lot to savour in this world with astonishing corners. Read on to know more about these colourful places in India to spot the scintillating sky.

Located in the Western Himalayas in the state of Jammu and Kashmir, what less can be expected from this surreal location than a sheer work of magic? Famous amongst tourists as the land of meadows and mountains, Gulmarg is a beauty which certainly seems like a small paradise on earth. At the time of dusk during the winter season, the whole sky above Gulmarg looks like a glittering board which has been painted in deep and rich colours.

The presence of sky-high mountains adds on the existing charm of Gulmarg as it sparkles and leaves everyone astonished by its unseen glamour and magnificence. If you are traveller who always looks forward to capturing the captivating views of this universe, then Gulmarg is one place which should be added to your bucket list.

A seaside town in the state of West Bengal, Mandarmani is famous amongst local tourists and offbeat travellers for its uncrowded and clean beaches which provide its visitors with the essence of composure and serenity. However, the major attraction which nobody fails to notice in Mandarmani is its beautifully twinkling sky at night.

The mesmerising and unforgettable views of its colourful sky when reflected on the waves of the Bay of Bengal make the entire atmosphere lively and romantic. Certainly, you wouldn't want to miss such an amazing phenomenon which can charm and compel you to never leave this place. So, why not get yourself to this surreal location and witness the godly presence of nature?

An ideal mix of lush greenery, misty mountains and a blue sky, the region of Valley of Flowers in the state of Uttarakhand can assuredly soothe your eyes. Not everywhere you can see colourful flowers on misty mountains with a blue backdrop of the charming sky. Hence, you must not miss the opportunity of visiting the Valley of Flowers and witnessing the rarest of natural paintings.

Once you have found yourself within this region, you will be exposed to the richness of nature lurking in the deep forests, beautiful grasslands and diverse wildlife. Isn't is an amazing place filled with natural wonders? The presence of several waterfalls and small streams makes it place more photogenic.

How about enclosing yourself within the boundaries of an island where you can savour the unseen views of the beautiful sky as it meets the blue waters of the sea on the horizon? If you wish for the same, then you must plan a tour of Neil Island in the union territory of Andaman and Nicobar Islands.

One of the most beautiful and photogenic places in India, Neil Island is a rare invention of nature. The views of the green vegetation as it separates the expanse of the sky and the sea certainly need to be captured. You must not forget to bring your camera here.

Another destination where you can spot the colourful sky, Nubra Valley is located in the state of Jammu and Kashmir and is one of the coldest places in India. It is recognised as a cold desert due to its chilled weather and minimal vegetation. However, the enchanting views of high mountains touching the horizon allure a lot of offbeat travellers. You can also explore its surroundings spots which include monasteries, lakes and hills.

Comments
Read more about: india travel tourism gulmarg uttarakhand beaches valleys
Other articles published on Jun 15, 2018
We use cookies to ensure that we give you the best experience on our website. This includes cookies from third party social media websites and ad networks. Such third party cookies may track your use on Nativeplanet sites for better rendering. Our partners use cookies to ensure we show you advertising that is relevant to you. If you continue without changing your settings, we'll assume that you are happy to receive all cookies on Nativeplanet website. However, you can change your cookie settings at any time. Learn more
Change Settings Continue