Little Diomede Island – An Island That Separates The USA And Russia 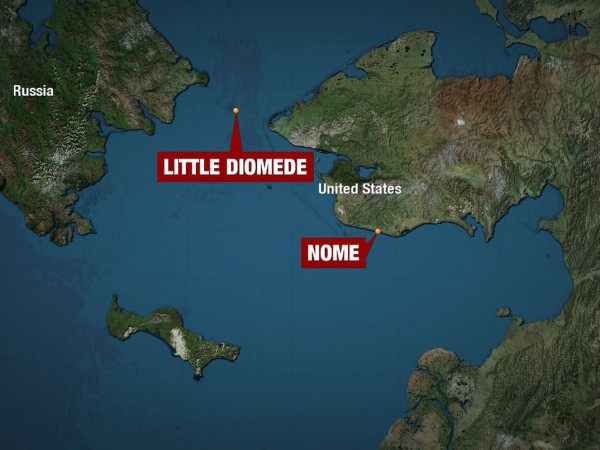 Slap-bang in the middle of the Bering Strait between Alaska and Russia, the USA's Little Diomede Island and Russia's Big Diomede Island separate the former sworn adversaries by just 3 km (2 mi). The border and international dateline are equidistant from each, and the former was established to delineate the USA's Alaska purchase of 1867.

Little Diomede Island is an inhospitable, flat-topped, steep-sided rock that is just 7.4 sq km (2.8 sq mi) in size. The small Inuit population operates a subsistence economy, harvesting crab, fish, beluga whales, walrus, seals and polar bears. Almost every part of this hard-won bounty is used for some purpose. Diomede, crouching at the base of the island's western face, is actually classified as a city, proudly boasting one church, one school and a store. The entire island falls within city limits.

It is isolated by persistently rough seas and summer. In 1995 BBC television presenter Micheal Palin arrived on Little Diomede to begin filming Full Circle, his epic circumnavigation of the Pacific Rim. He intended to close the circle back on the island eight months later, but unfortunately, the winter seas were so rough that even the doughty US Coast Guard cutter Munro was unable to put Palin and crew ashore.

Weather permitting, there is a weekly mail drop by helicopter, general supplies are landed once a year by barge and there are occasional visits by passing fishermen. Scientists are sometimes choppered in by the Alaska Air National Guard (there is an Arctic Environmental Observatory on the island).

Almost impossible. Try landing by chartered ski plane on sea ice in winter, but remember that a good Alaskan light plane touchdown is one you walk away from!

Be patient. One day getting there may be easy - the Diomede islands are a certain stop on the oft-proposed 'Intercontinental Peace Bridge' across the Bering Strait.