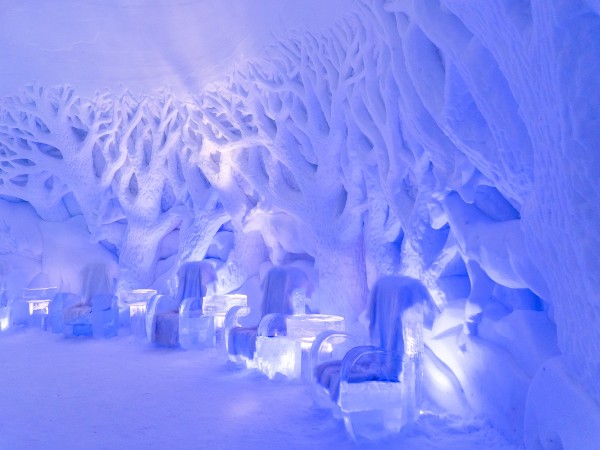 Way up in northern Sweden, 140 km (87 mi) north of the Arctic Circle, is the Town of Kiruna. Situated amidst stunning scenery, this area encompasses some of Europe's last surviving wilderness. Beautiful at any time of year. Kiruna comes into its own in January, when the annual Ice Festival is held - a wonderful winter celebration that even the night sky seems to applaud with occasional displays of the Aurora Borealis.

Kiruna is home to Sweden's space station, set up to study the Aurora, and the Ice Festival was first organised in 1985 o mark the Launch of a rocket. Taking place over the course of a week, a daily programme of events and competitions is planned, and guided tours, lectures and exhibitions at the space station can be enjoyed during this time. You can ski, skate, watchdog-sleigh or reindeer racing, and enjoy the exhibition of customised 'arks' - small shelters in which to spend the night when fishing on frozen lakes.

Alternatively, just enjoy the party - there's no shortage of vodka. Grab the chance to stay in an ice hotel - there's one built every autumn in nearby Jukkasjarvi, on the River Torne. During winter, the Torne is covered with a metre of ice, which is beautifully clear due to the water' purity and the steadiness of its flow. The Ice Hotel is absolutely astonishing - its design changes every year, depending on who creates it. As well as a reception area and uniquely styled bedrooms, it includes an ice bar and a church.

The highlight here is the ice sculpting championship: in a park near the centre, about 60 artists from different countries across the world create magical sculptures from large blocks of compressed snow. It is a delightful privilege to see these transient beauties.

Due to mining-related subsidence, the whole town is to be moved bit by bit to the edge of Lake Luossajarvi, to the northwest. Most buildings will be rebuilt there, but the town hail is to be cut in four, transported and reassembled in 2007 Virgin Galactica signed an agreement with Spaceport Sweden to carry tourists with Kiruna into space.